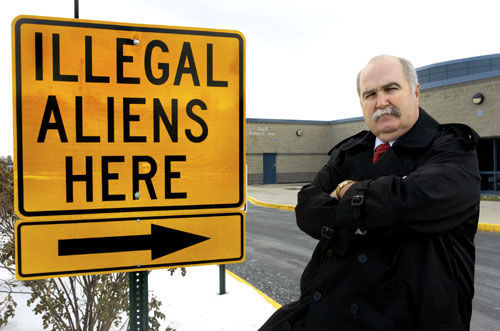 Ohio Sheriff Richard Jones had a unique idea to help with the cost of illegal aliens, who had committed crimes, currently taking up space in his jail. He sent a letter to Mexican President Enrique Pena Nieto charging him for the cost of each illegal alien housed in his jail. In response to Jones’ letter, the federal government sent him a letter stating he had violated “a treaty of like, 1790.”

In an appearance on BlazeTV’s “Dana,” the Butler County Sheriff told Dana Loesch the details.

“I sent him a bill for the prisoners that are in my jail. They came here illegally. I’ve not gotten any money from them, but I billed them so much. And, I’ll tell you what I got in return, my life was threatened.”

Jones said he got a call from the FBI saying there were three sheriffs in the country that were going to be killed by the drug cartels, and he was one of the three.

Not only did Jones write the president of Mexico, he also wrote Obama “asking and pleading with him not to bring these people here to the State of Ohio, and to secure our borders.”

According to Sheriff Jones, “We’ve had horrendous crimes here in this community. We had a senior citizen, an elderly lady, molested by a teenager that came over from Mexico. We had another one molested – an eight year old girl. We’ve had drugs pouring in, more so than before the government said the borders were sealed. And we’re being run over by the drug dealers coming to this community. The violence has increased, and we’re a long way from the borders.”

Jones indicated that Butler County spends eight to ten million dollars monthly on “free stuff,” indicating it as one of the reasons these illegals come here.

Labeling this as a “terrible, terrible tragedy,” Jones said, “People’s lives are being threatened. It’s in the state of Ohio, for crying out loud. We’re not in Arizona; we’re not in California.”

He said the administration is “making it ‘too easy'” for those who may wish to harm America to cross the border into the United States.

“They’re going to walk in with backpacks. They’re going to put some dirty bombs together; they’re going to do something really terrible. It’s just too easy,” Jones said. “We don’t know who they are. They don’t have vaccinations. Our jails are full. They hit and run. It’s totally out of control, and it’s gotten worse just in the last twelve months.”

Interestingly, the only treaty found signed by the United States in 1790 was the Treaty of New York made between the US and the Creek Indians.

Sheriff Jones seems to know more about what’s going on than this administration. There is only so much money to go around. Without any type of relief on the tax-payer, there will be no funds left to support necessary services, much less any “freebies.” Unlike this administration, Jones understands there is no such thing as a money tree.

This sheriff was bringing to light an additional problem involved with the influx of illegal aliens into the country being released “on their own recognizance” – the cost of housing those who commit additional crimes against the public. He was also pointing out the responsibility the country of Mexico, along with its president, has regarding the influx of illegals coming from Central America. While Mexico has bargained with these other nations to allow illegals “passage” through to the United States, Mexico has essentially committed a crime against the United States. It is a crime for which these nations should be held responsible one way or another. Jones billed Mexico for punitive damages.

With the influx of the criminal element of illegal aliens, Jones has indicated his community is being “overrun.” More than likely, Jones’ department has been stretched thin resulting in more costs to taxpayers through the increased workload. Border patrol agents have reported that drug cartels “out gun” the agency so it is safe to say this sheriff’s department would be facing the same issue in dealing with the drug cartels in his community. In addition, Jones cited a teenager as being the perpetrator of a case of molestation, highlighting the fact that commission of these types of crimes are not limited to illegal alien adults.

For his efforts, Jones has been rewarded with a letter informing him of a 1790 treaty violation. It is surprising the letter would cite a treaty since it seems the majority in the current administration knows nothing about history. The treaty cited, is in regard to the Creek Indian Nation which has nothing to do with Mexico. On top of this “treaty violation,” the FBI provided Jones with what could be termed a courtesy call to let him know the drug cartels were going to kill him. The FBI had advanced knowledge about criminal activity of illegal aliens in drug cartels against three sheriffs in our country. However, that information was not forthcoming to Jones until he requested damages from the Mexican president.

Something just doesn’t quite add up here. Could it be that Mexico has a link with these drug cartels and our own government has a link with the same drug cartels in order to be able to glean this information? Could Mexico have provided this information to our government? Surely, this advanced information indicating a possible future crime didn’t come from the NSA, whose surveillance zeal has not uncovered one terrorist action against America.

According to the propaganda arm of Obama, there is a “humanitarian crisis” at our southern border of unaccompanied children crossing that are in need of compassion, food, shelter, “teddy bears and soccer balls.” These children are “refugees, migrants and victims” fleeing the violence and poverty of their home countries in order to continue to live instead of dying in the streets. The media contends Americans should show compassion by allowing these “unaccompanied children” to remain until they can be sent back home (approximate wait time for hearing 600 days, if they show) while at the same time saying these UACs are being reunited with family already in the states illegally.

Does anyone else not find it odd that our government knows exactly where to send these “children”?

The media ignores the truth that the majority of those illegals invading our country are young males ages 14-17 (teenagers) who are affiliated with gangs and using the detention centers as recruitment outposts. Makeshift family units have been conveniently left out of reports, as well as legitimate families that are crossing in hordes. Focus has been on the “minority” makeup of this illegal invasion – unaccompanied children – in order to produce an emotional response.

While Obama is positioning to bring in more illegals from Central America, possibly by air travel, in violation of our immigration laws, there are law enforcement officers willing to speak out about what is actually occurring in their communities because of this massive invasion and willing to hold someone accountable for the increased cost to the taxpayers. This is more than is being done by the fodder in Washington and the lame stream enemedia. Americans should listen to those law enforcement officers willing to place everything, including their life, on the line to expose this travesty.

Americans and Sheriff Jones should not hold their breath in anticipation of receiving any monetary compensation from Mexico to cover costs associated with that country’s criminal act against the United States. What Americans should expect is more of what is happening in Butler County, Ohio to be coming to their neighborhoods and communities, and to foot the bill. This is the reason border security is every state and every American’s problem.

Suzanne Hamner (pen name) is a registered nurse, grandmother of 4, and a political independent residing in the state of Georgia, who is trying to mobilize the Christian community in her area to stand up and speak out against tyrannical government, invasion by totalitarian political systems masquerading as religion and get back to the basics of education