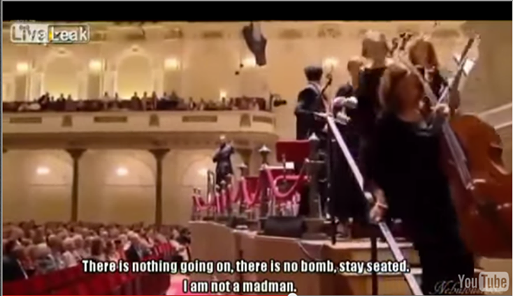 Queen Beatrix of Holland attended an Orchestral Concert at the Concertgebouw in Amsterdam. A Muslim, who was not on the program to speak, proceeds to give the Queen and the audience a lecture on the “beauty” of Islam. As he continues, trying to mix Jesus Christ with other religions, the members of his orchestra apparently had enough and grabbed their instruments and walked out. Keep in mind this happened in 2011, but I’ll make the point of the relevance at the end of the article.

Following the Queen’s being seated, along with her party, the Muslim launches into da’wah (Muslim proselytizing).

So before he even gets started he apologizes and acknowledges that he is wrong in doing what he is doing and yet, he does it anyway.

“In the name of Allah, the Most Compassionate, the Most Merciful…I am sorry, I know it is not appropriate to do this, this way,” he continues as his own mouth condemns his conduct. “But I am compelled to do so.”

He then said that he had issued requests to see the Queen, but those requests were ignored, so apparently he believed it his duty to speak to her during the concert from the stage in front of everyone.

[Jesus] said, “Indeed, I am the servant of Allah . He has given me the Scripture and made me a prophet.

And He has made me blessed wherever I am and has enjoined upon me prayer and zakah as long as I remain alive.

And [made me] dutiful to my mother, and He has not made me a wretched tyrant.

He then proceeded to state, “I am Issa Mesih, Yeshua, Jesus Christ, however you want to say it.”

At these words, the orchestra gathered their instruments up and walked out. It wasn’t apparent as to whether they had been told to leave or simply got up and left on their own. What is most amazing is that though they are leaving, the audience remains in their seats. Later a spokesperson for the Queen said that since she was not being threatened, she remained seated.

The Muslim man continued as voices are heard in the background. “I am here to invite you…,” he continued as he noticed the orchestra leaving.

“There is nothing going on, there is no bomb, stay seated. I am not a madman,” he declared. “I am a servant of Allah, and I invite you to Faith. So believe in Allah and worship Him then. This is the Straight Path.”

With that, his mic was taken from him as he was escorted out, where police checked his credentials and then escorted him out of the building and spent the night in the police station.

After he was escorted out, the building was searched for bombs as you can see in the video below, with a statement following the concert beginning around the 5:00 mark.

Following the Muslim’s speech, some in the building applauded. Consider the reaction difference to the of a brave German woman when an Imam went into a Christian Church and opened with an Islamic prayer. She shouted him down, “Don’t be fooled! This is a Lie!” while waving a flag with “Jesus Christ is Lord” on it.

Yes, this is a few years old, but how many people have actually heard about this? The reason I bring this to your attention, if you have not already seen this, is that this is exactly the kind of thing Pieder Beeli brought up yesterday in his article and that is the immediate reaction to this man’s message of “peace” should have been countered by what is known about Mohamed and the Quran. Mohamed was a man of death and destruction, an idolator, a pedophile and a thief. He was a terrorist. Of that, there can be no doubt.

So when someone comes along and they quote the Quran, written over 500 years after Christ, and they claim to have Christ’s words and claim that the Scriptures of the Old and New Testaments have been distorted when there are literally thousands of manuscripts that demonstrate quite the opposite, you cannot believe a word they say. This Islamist may not have planted a bomb, but he was known to the police and the words he spoke were to deceive the people there. He failed to speak about the jihad that Islamists are to wage on Christians and Jews and all non-Muslims. He failed to tell anyone about Mohamed’s wickedness, yet he wants to equate Jesus with Islam.

This is what Islam is doing today in America. They operate under the guise that Islam is equal to Christianity or all other religions. It is not and this can best be identified by pointing to the founder of Islam. No Islamists can deny the life of Mohamed and what he did. Mohamed is a far cry from Jesus Christ, yet Mohamed put a fictional Jesus in the text of the Quran to deceive future converts, while at the same time telling his people to kill those that followed the true Christ. This is the deceptive, demonic and wicked face of Islam.

The Dutch have basically lost to the invasion of Islamists. The rest of Europe isn’t far behind. France, at least took a stand this week in banning Palestinian terrorist protests, but the result was that the lawless Islamists just protested anyway, destroying property in their wake. This is what happens when you appease Islam.

Christians, Islamists are coming and growing in number in America. Will you submit to Islam by remaining silent, cowering in fear that your action may cost you something, or will you stand and denounce the vileness of the death cult of Mohamed? Will you confront with the truth of the Word of God and hold God’s law up to sinners of all stripes, including Islamists, and call them to repent and bow the knee to Christ, or will you sit silently by and join hands with the enemies of Christ? The choice is yours. May God grant us all the grace to raise up a standard against the religion of pieces.