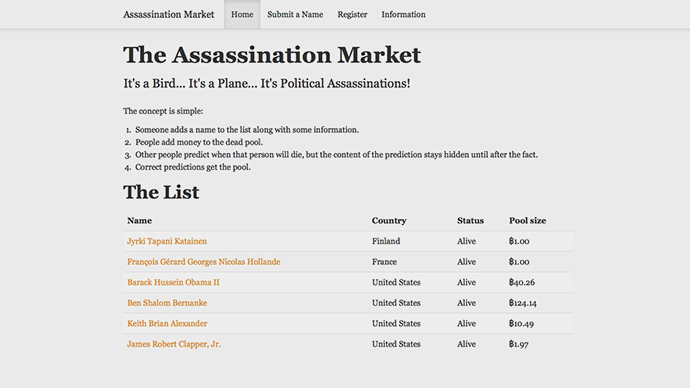 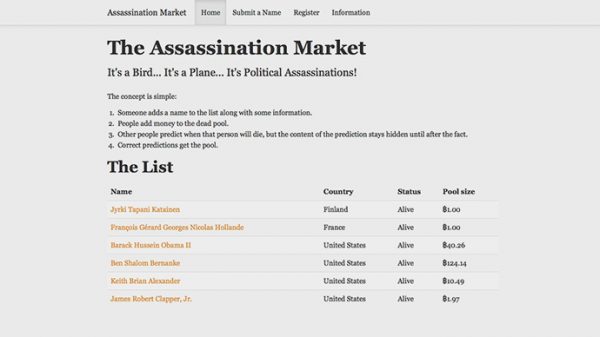 The initials TPTB stand for The Powers That Be — an expression of the helplessness and alienation of some people who believe that the world is controlled by a group of elites, both public and in the shadows.

(See “Secret Group Controls the World” for a sober and sobering view of TPTB.)

Now, populist resentment against TPTB has found disturbing expression in a website that, in the guise of a dead pool (1), invites bids to assassinate world leaders, including U.S. president Barack Obama.

Andy Greenberg reports for Forbes, Nov. 18, 2013, that he received an encrypted email from an individual using the alias Kuwabatake Sanjuro (2)about a website he’s created called Assassination Market, which enables anyone to put a bounty on the head of any elite by using bitcoins.(3) If someone on Assassination Market’s hit list is killed, the assassin collects  the accumulated bitcoins, so long as he or she can prove to Sanjuro that s/he is the perpetrator.

(1) A dead pool, aka death pool, is a game of prediction which involves guessing when someone will die. Sometimes, money is involved in that the person who guessed correctly collects the financial “prize.”

(2) Kuwabatake Sanjuro is the name of the rōnin (masterless samurai) played by Toshiro Mifuni in the 1961 Akira Kurosawa film Yojimbo.

(3) The Oxford Dictionary defines bitcoin as “A type of digital currency in which encryption techniques are used to regulate the generation of units of currency and verify the transfer of funds, operating independently of a central bank.” According to Wikipedia, payments are recorded in a public ledger using bitcoins as its unit of account without a central repository or single administrator, which has led the US Treasury to call bitcoin a decentralized virtual currency.

Sanjuro told Greenberg he was provoked by revelations of mass surveillance by the NSA exposed in a series of leaks by agency contractor Edward Snowden: “Being forced to alter my every happy memory during internet activity, every intimate moment over the phone with my loved ones, to also include some of the people I hate the most listening in, analysing the conversation, was the inspiration I needed to embark on this task. After about a week of muttering ‘they must all die’ under my breath every time I opened a newspaper or turned on the television, I decided something had to be done. This is my contribution to the cause.”

Sanjuro said he accepts only user-suggested targets “who have initiated force against other humans. More specifically, only people who are outside the reach of the law because it has been subverted and corrupted, and whose victims have no other way to take revenge than to do so anonymously.” On the Assassination Market website, Sanjuro wrote “This should primarily be a tool for retribution. When someone uses the law against you and/or infringes upon your negative rights to life, liberty, property, trade or the pursuit of happiness, you may now, in a safe manner from the comfort of your living room, lower their life-expectancy in return.”

Like other so-called “dark web” sites, Assassination Market runs on the anonymity network Tor, which is designed to prevent anyone from identifying the site’s users or Sanjuro himself. Sanjuro’s decision to accept only Bitcoins is also intended to protect users, Sanjuro, and any potential assassins from being identified through their financial transactions. Bitcoins, after all, can be sent and received without necessarily tying them to any real-world identity. In the site’s instructions to users, Sanjuro suggests they run their funds through a “laundry” service to make sure the coins are anonymized before contributing them to anyone’s murder fund.

As for technically proving that an assassin is responsible for a target’s death, Assassination Market asks its killers to create a text file with the date of the death ahead of time, and to use a cryptographic function known as a hash to convert it to a unique string of characters. Before the murder, the killer then embeds that data in a donation of one bitcoin or more to the victim’s bounty. When a target is successfully murdered, he or she can send Sanjuro the text file, which Sanjuro hashes to check that the results match the data sent before the target’s death. If the text file is legitimate and successfully predicted the date of the killing, the sender must have been responsible for the murder, according to Sanjuro’s logic. Sanjuro says he’ll keep one percent of the payout himself as a commission for his services.

Sanjuro believes that if Assassination Market can persist and gain enough users, it will eventually enable the assassinations of enough politicians that no one would dare to hold office. He says he intends Assassination Market to destroy “all governments, everywhere. I believe it will change the world for the better. Thanks to this system, a world without wars, dragnet panopticon-style surveillance, nuclear weapons, armies, repression, money manipulation, and limits to trade is firmly within our grasp for but a few bitcoins per person. I also believe that as soon as a few politicians gets offed and they realize they’ve lost the war on privacy, the killings can stop and we can transition to a phase of peace, privacy and laissez-faire.”

When I first read Greenberg’s Forbes article on Assassination Market (AM) about 3 months ago, using my browser’s “private window” function, I had accessed the AM website, https://assmkedzgorodn7o.tor2web.blutmagie.de/. This was what the website said:

The concept is simple:

Someone adds a name to the list along with some information.
People add money to the dead pool.

Other people predict when that person will die, but the content of the prediction stays hidden until after the fact.

Correct predictions get the pool.

The hit list at the time had seven names. Top of the list was Ben Bernarnke, then chairman of the Federal Reserve System. Barack Obama was second.

The website had detailed instructions on how to enter the pool, submit bitcoin payment, maintenance of anonymity via encryption, and an address to transfer the funds to, etc.

The person meets his untimely demise

I confirm the death through independent news sources, or whatever else I can think of. I’ll be very thorough. I may have problems with confirmations in foreign languages, so the person should be famous enough for at least one English news-source to report his or her death. This may take a few weeks, depending on the probability of fraud and the strength of the evidence.

If the person is missing, but strongly suspected to be dead, I wait for 5 years before allowing predictions for deaths in the 5 days after the person was last seen to be claimed.

Send me the plain text file matching the hash in the blockchain. If this is the only prediction, the money is paid instantly. If there are multiple, allow one month for other predictors to state their claim. Payout is manual and may take a while. When a new prediction gets claimed the month restarts if there are more of them. I take 1% of the pool for my trouble.

If the person dies with no predictions, the money is refunded. Payments without a refund address are considered donations. If there are outstanding predictions, I wait for claims for one year before refunding. If there are multiple accurate predictions, the pool is split into the number of days between the first prediction and the death, and each prediction gets an equal claim on all the days it has been valid. For example, if the pool is 500 BTC after my 1%, and there is one 5 day and one 3 day old prediction, the first gets 200 for the first two days and 150 for the other three. Days of validity includes both the day it was entered on and the day of death.

To a reader’s question of whether a person can be taken off the hit list, Sanjuro replied: “No. Once you’re on the list you’re on it until you die. Allowing this would complicate the protocol a lot and corrode trust in the system.”

In answer to another reader’s question “What if you’re found?,” Sanjuro wrote: “I take great pains to avoid discovery, but in that unfortunate event, if the system works, there are no traces that could lead back to any of my users. All the money will be confiscated by the state, and I will probably be killed or spend a considerable portion of my life in jail.”

Today, when I tried to access the Assassination Market market, I got this message:

Sorry, we couldn’t serve the page you requested.

In his Forbes article, Greenberg wrote that he had contacted the Secret Service and the FBI to ask if they’re investigating Assassination Market, “and both declined to comment.

Greenberg also noted that “the launch of Assassination Market may be ill-timed for Sanjuro, given law enforcement’s recent crackdown on the dark web. In August, the FBI used an exploit in Tor to take down the web hosting firm Freedom Hosting and arrest its founder Eric Eoin Marques, who is accused of offering his services to child pornography sites. And just last month, the FBI also seized the popular Bitcoin- and Tor-based black market for drugs known as Silk Road and arrested its alleged creator, Ross Ulbricht.”

It would appear that someone finally did get to Kuwatabe Sanjuro.

Editor’s Note: Please be careful what you say in the comments. I do not censor comments because I believe in the first ammendment. However, this is exactly the type of post that I would expect to be heavily monitored by the federal government. As of today, one bitcoin is worth $594.00 US Dollars. -Dean Garrison