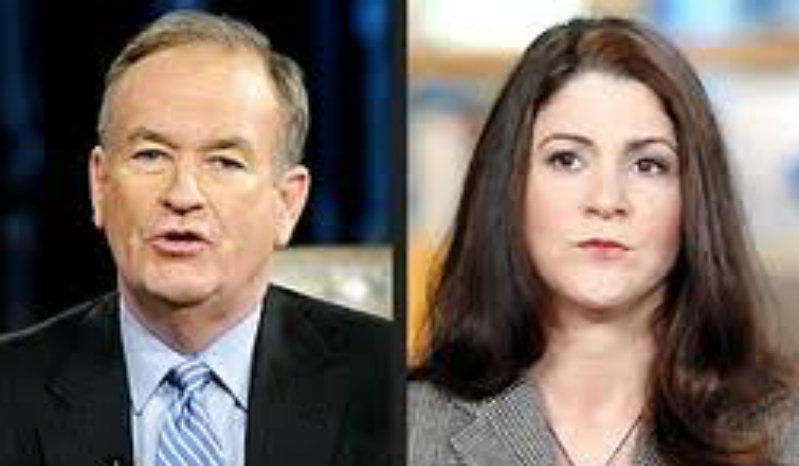 Bill O’Reilly prides his  program, The O’Reilly Factor, on being a ‘no spin zone’ despite his perpetual spinning of stories.  Recently there was a segment on the program deriding Cop Block.  O’Reilly went so low as to bring up the irrelevant arrest history of one of Cop Block’s founders.  Since O’Reilly saw fit to dredge up ancient history it is only fair to remind the gentle reader about O’Reilly’s past; specifically the sexual scandal of 2004.  Shall we count the ways?

On October 13, 2004 O’Reilly was sued in a sexual harassment lawsuit for $60,000,000 by his former producer named Andrea Mackris.  Mackris was an employee of Fox from 2000, with lawsuit documents showing O’Reilly’s rabid sexual harassment began in May 2002 and continued until September 2004.  Mackris filed a wild document full of O’Reilly’s exploits.   The fallout was immense, with O’Reilly counter-suing Mackris for extortion before finally settling the lawsuit for an untold amount of money that is generally believed to have been in the millions of dollars.  I suppose that I could stop there with the story, but what fun would that be?

Before the case was settled a salacious 22-page document was presented to the court where Mackris was said to have various audio recordings of O’Reilly calling her numerous times to enact his sexual fetish of phone sex.  The sordid scenario began innocuously enough.  Mackris was informed on May of 2002 that she would no longer employed by FOX for $56,000 a year.  O’Reilly heard of this and invited Mackris to dinner where he informed her that she was re-hired and with a raise to $65,000!  What a guy, right?  Always looking out for his employees, but all was not what it seemed.  After giving Mackris the good news O’Reilly made his move.  From the original court documents:

Bill’s quite a classy fella, but his first sexual pass at Mackris was not yet over:

For around a year O’Reilly apparently moved on, but shamelessly continued his sexual harassment in May 2003 by inviting Mackris and her friend from college to dinner where he propositioned both of them for phone sex, and sex in his hotel room:

After being rejected again O’Reilly waited five months to invite Mackris to dinner in September 2003 to discuss ‘business’ and this time he was more determined than ever:

Another swing and another miss for O’Reilly, but he kept accruing sexual harassment points.  Mackris and O’Reilly wouldn’t socialize outside of the office again until December 2003, when Mackris informed O’Reilly that she was leaving FOX for a job at CNN.  This may have been O’Reilly’s last chance to use his position as Mackris’ boss to sexually manipulate her and he took another shot:

After leaving O’Reilly’s clutches, partly to escape his constant harassment and partly to advance her career, there was little contact between the two until April 2004.  Mackris wasn’t happy at CNN for a variety of reasons.  Her boss was recently fired for sexual harassment, and she was looking for a way to rejoin the team at Fox.  O’Reilly was happy to oblige, and even promised to make no further advancements towards Mackris.

After Mackris warned O’Reilly that he should be careful about who he propositioned he unleashed a furious rant describing what would happen to any female who spoke up about his behavior:

It wasn’t until July 2004 and Mackris returned to work for FOX, with O’Reilly repeatedly hounding Mackris that she ‘owed’ him dinner for helping get her job back.   They had little contact until O’Reilly called Mackris, unprompted, and apparently masturbated while talking to her. O’Reilly was going to have phone sex whether she consented or not:

O’Reilly then proceeded to stalk Mackris, calling her on four separate occasions throughout the month of August.  Mackris agreed to meet with O’Reilly for dinner on August 24 to discuss her future at Fox.  O’Reilly began by praising Mackris, saying she had a bright future.  He then started in with sexual banter:

When Mackris deflected O’Reilly’s advances his tune changed immediately.  Mere minutes earlier he was praising Mackris, and he now said that she wouldn’t advance further at FOX:

Note how O’Reilly’s exchanges have turned more aggressive and hostile.  Rather than attempt to charm Mackris, and we all know how charming of a fella he is, he now was using intimidation as his aphrodisiac of choice.

The way O’Reilly tells it, he was doing Mackris a favor by sexually harassing her!  That is how completely deluded and infatuated O’Reilly is with himself, but his years of harassment were all going to come tumbling down upon him.  O’Reilly had one final sexually harassing telephone interaction with Mackris on Sept 24, 2004, where he once again masturbated:

After enduring years of sexual harassment and threats Andrea Mackris filed a lawsuit against her employer.  O’Reilly claimed slander and extortion, but eventually paid Mackris millions of dollars.  Mackris filed in court on Oct 13 and O’Reilly paid her a cash settlement a mere 16 days later on Oct 29, click here to read the archive.  Clearly this was not because of the goodness of his heart, but because he knew that Mackris did indeed possess tapes of his despicable sexual ramblings.  Therefore he used his vast fortune to buy her silence, but the court document is a matter of record.  O’Reilly in his own words:

“On a personal note, this matter has caused enormous pain, but I had to protect my family and I did. Some of the media hammered me relentlessly because, as you know, I am a huge target, as is Fox News. The good news is that Factor viewers and listeners seem to have given me the benefit of any doubt when some in the media did not. You guys looked out for me and I will never forget it. This brutal ordeal is now officially over, and I will never speak of it again.”

Mr. O’Reilly may never speak of this incident again, and would certainly like the public to forget about his own past.  Until he rescinds bringing up the irrelevant histories of individuals that he disagrees with, we will make certain that they do not forget.

Lou Colagiovanni is a political consultant and the editor-in-chief of ruthless-politics.com, and We survived Bush.  You will survive Obama.  He is a national crime / political journalist for Examiner.com and also writes for other publications including WTF Magazine and EducateInspireChange.  Lou’s work has been published on thousands of websites across the Internet and he is regularly featured on television and radio.  You may contact Lou at [email protected]