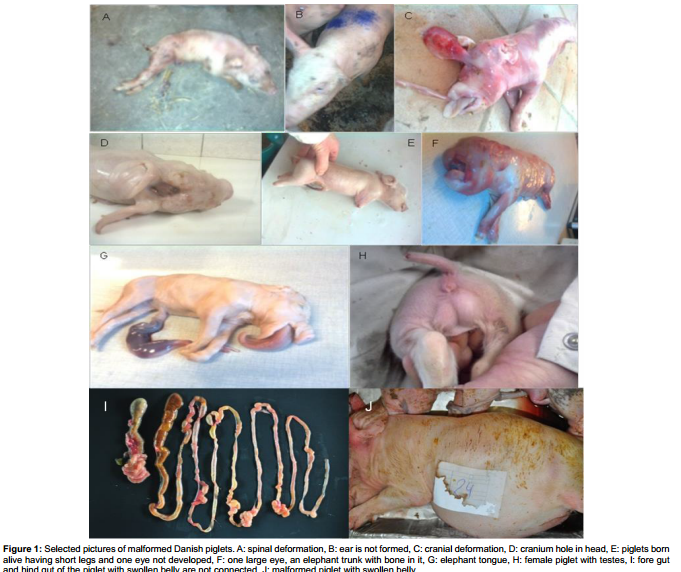 In April, a Danish farmer called for a ban on glyphosate. For three years he had used non-GMO soy feed for his pig herds, but when he ran out, he ordered two tons of GM soy feed. His herdsman immediately told the farmer of diarrhea in the piglets and lack of appetite in the sows. He had not told the herdsman of the feed switch. Worse, he began noticing an absurd amount of deformed piglets and reproductive problems in the sows.  Roundup is used on GMO soy shortly before it is used as pig feed.But that’s not all – he brought 38 malformed piglets to a laboratory. In a research project by German and Egypt Veterinarian doctors using ELISA testing, differing levels of glyphosate (aka Roundup herbicide, by Monsanto) concentrations were discovered in piglets born from sows eating genetically modified soy feed.That research became “Detection of Glyphosate in Malformed Piglets,” published in April, by open access journal Environmental & Analytical Toxicology.All organs and tissues of the euthanized one-day old piglets contained glyphosate. Highest concentrations of glyphosate were found in the lungs, followed by the hearts. Lowest concentrations were found in muscle tissues. They noticed that the rate of malformations increased to one out of every 260 piglets born of sow when feeds contained 0.87-1.13 ppm glyphosate during the first 40 days of pregnancy. If feed soy contained 0.25 ppm glyphosate, then one of 1,432 piglets was malformed.They postulated that glyphosate was reaching the piglets through the placenta of their dams. They draw from a 2010 study citing glyphosate’s effects on embryonic and placental cells (in chickens), producing mitochondrial damage, necrosis and programmed cell death with doses far below those used in agricultural concentrations.

In their summary, they write:

The detection of such glyphosate concentrations in these malformed piglets could be an allusion to the cause of these congenital anomalies. Further investigations are urgently needed to prove or exclude the role of glyphosate in malformations in piglets and other animals.

Detected deformities in piglets from the picture in the study:Spinal deformation, ear not formed, cranial deformation, cranium hole in head, born alive piglets with short legs and one eye not developed, one was born with one large eye and an elephant trunk with bone in it (!!!), elephant tongue, female piglet with testicles, piglet born with swollen stomach has disconnected fore gut and hind gut (intestines), and one malformed with swollen belly.They conclude:

…glyphosate could reach the animals through food and feed and is able to pass the placental barriers. Further studies are warranty needed to confirm or exclude the role of glyphosate in malformation in piglets.

Check out the actual number amounts of glyphosate found in the piglet organs because they were averaged out. But high maximum numbers were apparent in the livers, kidneys and brains too. You might also appreciate the other studies listed in their references.

When sticking to non-GMO soy feed, the farmer reports that his herds average more piglets, less piglet diarrhea, fewer ulcers, no bloat and better milk and appetite. Previously, he did not experience the amount of malformations that prompted him to go to the lab. He does not blame the farmers, but the chemical companies and government agencies for not taking safety matters seriously. He no longer minds paying extra for non-GMO feed – about $0.04 (USD) more per pound – which adds up, but better preserves his herds.
Heather Callaghan is a natural health blogger and food freedom activist. You can see her work at NaturalBlaze.com and ActivistPost.com. Like at Facebook.