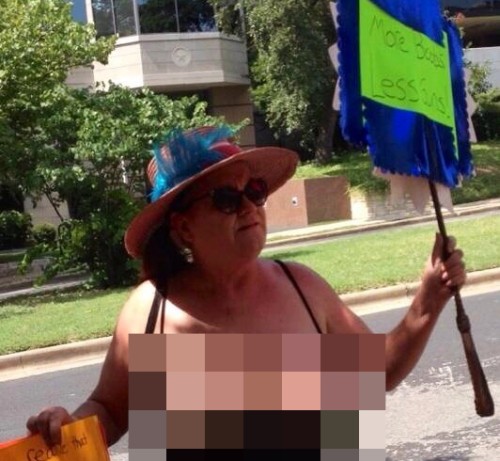 I think I have seen it all. Well, maybe not all. Thank goodness someone had the decency to censor the public nudity shenanigans of “Moms Demand Action.”

Yes, Moms Demand Action is at it again.

Early last month, David Risselada reported that this same group was kicked out of a Chipotle Mexican Grill in Tulsa, Oklahoma for getting a bit unruly. It evidently took them over a month to figure out how they could achieve a new low to “promote” gun control.

Hillary Clinton recently stated that we can’t let gun control opponents hold an opinion that “terrorizes” America. I’d say this is more “terrorizing of America” than I have seen in quite some time.

Earlier this afternoon, CATI (Come and Take It) conducted a walk through downtown Austin to raise awareness for the current restrictions on gun rights in Texas. This walk is done monthly, and today’s walk was led by Thomas Jefferson from their Austin Chapter. Anti-gun protestors decided to arrive though, and they conducted their protest TOPLESS!

The walk began on Congress in downtown Austin near the Capitol, and the ladies followed CATI’s members throughout of the day.

These women mentioned “Moms Demand Action” (MDA) petitions according to CATI Austin’s leader Tom Jefferson, and continually discussed the requests made by Target and Chipotle to leave guns outside their establishments, which of course Moms Demand Action was solely responsible for.

Unfortunately, the nonsense didn’t stop there. The women continued to remain topless in front of innocent children that were with today’s CATI group, shout obscenities and racial slurs, while “BAREing” signs that contained vulger sexual messages. See the pictures below, which I obviously had to censor.

Is this what the anti-gun movement is now about? Is this how low they are willing to sink?

Are they trying to scare us into submission?

As a man I am not perfect and would probably have done a double take if anything was worth seeing here. But as a Christian I am very offended. How can you expect anyone to take this seriously?

A report from Guns Save Life sums it up better than I probably can:

Now, folks who know me know I’m a red-blooded American male who appreciates attractive women.  Having said that, there are some women who should just go ahead and keep their shirts on as a public service.

These women were some of that tiny subset.

Not only were they lewd and vulgar in dress (or lack thereof), their foul-mouthed language wasn’t family or kid-friendly.  They also tried to stir public anger by shouting racist and bigoted labels at the peaceful CATI walkers.

So much for intelligent and constructive debate. As with most liberal tactics I would suppose that if you don’t like those “boobs” you might be a racist.

If you don’t think young men in Austin were turning gay on Saturday afternoon then you might be a racist.

I can’t reason with you.

All I know is that you are not taking my guns. Period.