The full name of Senate Bill 2277, introduced on May 1st, 2014, is “To prevent further Russian aggression toward Ukraine and other sovereign states in Europe and Eurasia, and for other purposes.” It starts out claiming to be about the Department of Defense creating “a strategic framework for U.S. security assistance and cooperation in Europe and Eurasia”.

Currently, the bill is listed on Congress.gov as having been read twice and referred to the Committee on Foreign Relations. The bill’s full text can be found here.

So, for the purposes of this article, let’s go ahead and focus on the “for other purposes” part mentioned in the bill’s title.

This is the part that involves exploiting natural gas resources and inundating the former countries of the Soviet Union with American propaganda regarding the coming conflict on behalf of not just our government, but you, the American public.

It’s written right there in the bill. 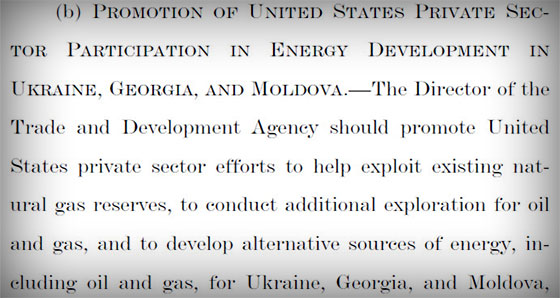 So the U.S. government is going to “help” by allowing American corporations to exploit existing natural gas reserves and conduct additional exploration for oil and gas…you know, while we’re busy combating that pesky Russian aggression.

Well, it seems Vice President Joe Biden’s son Hunter made the right move at just the right time when he decided to join the board of Burisma Holdings, Ukraine’s largest private gas producer, not even two weeks after this bill was introduced.

The bill also involves lots of propaganda, and if you are American, the opinion expressed in that propaganda will be presented to these people as if you agree with it.

Section 309 “Expanded broadcasting in countries of the former Soviet Union” discusses how, while the United States government is doing all this, there will simultaneously be a propaganda campaign aimed at these countries to “convey” the American government and public’s “perspective”.

The section begins, “Not later than 90 days after the date of the enactment of this Act, the Chairman of the Broadcasting Board of Governors and the Director of Voice of America shall provide Congress with a plan, including a cost estimate, for immediately and substantially increasing and maintaining through fiscal year 2017 the quantity of United States-funded Russian-language broadcasting into countries of the former Soviet Union.” 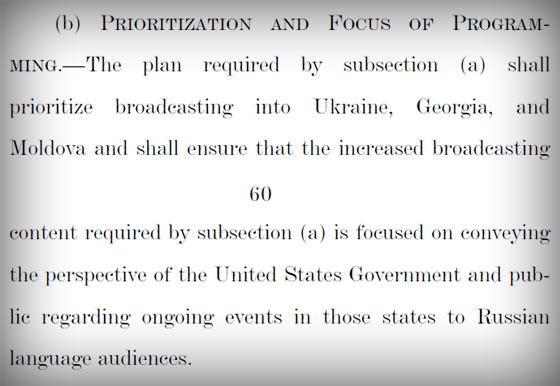 The focus of the “programming” will be “conveying the perspective of the United States Government and public regarding ongoing events in those states to Russian language audiences.”

So not only will our government be “preventing further Russian aggression” by allowing our corporations to exploit natural gas reserves in Ukraine, Georgia and Moldova, but they will launch a massive propaganda campaign at the same time in the name of the government and American citizens telling these people America is awesome for doing so.

I for one think this is little more than crony capitalism masquerading as war — war for empire without a single legitimate reason (unless exploiting natural gas is a good enough reason to potentially provoke World War III). I shudder to think many people will senselessly lose their lives over this dangerous game.

Well, I’m an American citizen, and that propaganda does not speak for me. No wonder so many people around the rest of the world think all Americans are a bunch of greedy warmongers.

In other news, at a recent Aspen Institute conference, US Joint Chiefs of Staff General Martin Dempsey — who has been busy dusting off 20-plus-year-old Cold War plans — actually found it within himself to utter, “You’ve got a Russian government that has made a conscious decision to use its military force inside another sovereign nation to achieve its objectives. It’s the first time since 1939 or so that that’s been the case.”