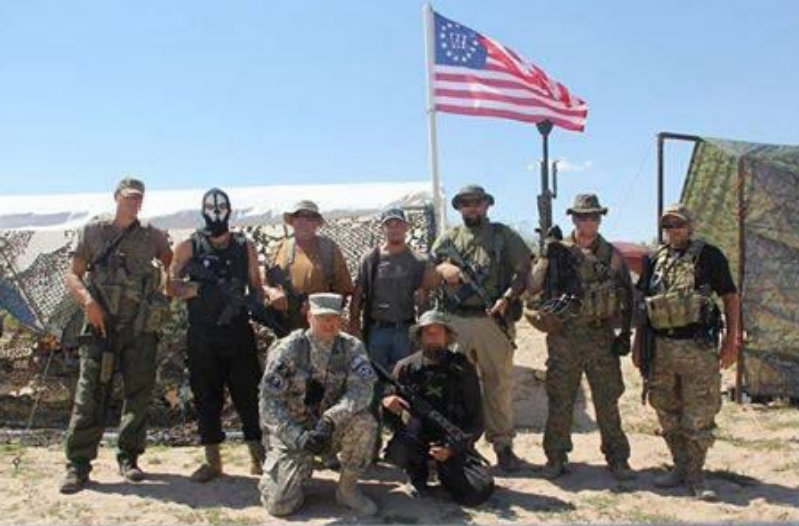 During the 1990′s the growth of the militia movement surged at the heels of several national events. The Cold War had finally ended, but suspiciously, the United States’ global military apparatus did not shrink away. Domestically, the police state we know and love today began to assert itself. It could be argued that this new force in American affairs manifested in the events that transpired at Waco and Ruby Ridge. Suddenly the American public came face to face with the true nature of their government in a very publicized and horrifying way. Most people talked about it, and promptly went on with their daily lives as usual. As for the rest, that tiny vocal minority…they joined militias.

For the most part, it was also an extension of the survival movement of the 80′s. Perhaps with the threat of nuclear war no longer plaguing America’s psyche, they began to see that the invader was not some ushanka wearing commie from Siberia. The real invader had been in our back yard the entire time, busy infecting every layer of American society, and it had been around for a long long time. Those who were aware of this encroaching tyranny did what most humans do when they feel threatened by something bigger than themselves. They banded together. Under the banner of several different ‘right of center’ ideologies, they prepared for the possibility that they may have to go to war with their government someday.

However, the movement was short lived. After the events of the Oklahoma City bombing transpired, the public’s view of the militia movement soured in big way (though the official version of those events are questionable). For the rest of the 90′s, most of the militia movements had been infiltrated and provocateured . As the most extreme examples of this anti-government movement received the most media attention, the moderates got cold feet and left in droves. This process continued well into the election of George Bush Jr., which managed to placate the moderate conservatives enough to believe that the tyranny experienced under Clinton was a thing of the past. At this point the militia movement was “dead on arrival”.

For the most part the movement had been silent for many years, with the setup of the Hutaree militia, and the Minutemen’s arrival on the border being the exceptions. But the situation that developed at the Bundy Ranch earlier this year officially ended the silence and decline of the militia movement. They turned a situation that most people (myself included) were certain was going turn into Waco, and instead, they forced the Federal authorities to stand down without bloodshed. It was a rather decisive moral victory, and probably helped the militia “image” so to speak.

Now this new fledgling militia movement appears to be heading south. According to the San Antonio Express, various militia groups are pouring onto the Texas border to help deal with the influx of illegal aliens. So far these aren’t the Minutemen, but about a dozen other similar groups with names like the “Central Valley Militia”, and “Operation Secure our Border”.

Of course the Minuteman haven’t disappeared completely. Jim Gilchrist is attempting to revive the movement with the current border crisis. They’re hoping to recruit 3500 members in the next year with what they’re dubbing, Operation Normandy. Of course, the usual suspects at the SPLC have come out to condemn the Minutemen, and criticize the wider militia movement with the typical claims of racism and extremism.

These new movements however, appear to be playing it safer than their 90′s counterparts. Gilchrist is instructing the resurgent Minutemen to basically carry kid gloves:

Meanwhile the border groups in Texas are being instructed on their rules of engagement.

“(Rules of Engagement) is if in fear of bodily injury, weapons free, if fired upon, return fire. Real simple,” member KC Massey posted along with a photo on Facebook. “We are not worried about an “International” incident if they shoot at us.”

They appear to be taking a purely self defensive stance, which is what put them on the moral high ground at the Bundy Ranch. It’s a recipe for success. And who could forget that the bizarre Las Vegas cop killers were forced to leave the Bundy Ranch for reasons that haven’t been fully disclosed. It appears the movement has learned its lesson from the 90′s, and is successfully keeping the crazies out.

This new breed isn’t playing toy soldiers. They’re getting very serious about quality control and hopefully, keeping informants out. If they can do all that and keep from fighting each other, then they stand a good chance of making a difference. Most importantly, they need to maintain a self defensive stature. That’s ultimately what destroyed the militia movement nearly 20 years ago. Going out and bombing buildings and robbing banks is a fast path towards bringing the full weight of the Feds down on you. It’s a failed strategy, and if this generation can avoid it, they stand a decent chance of protecting our freedoms in the long term.