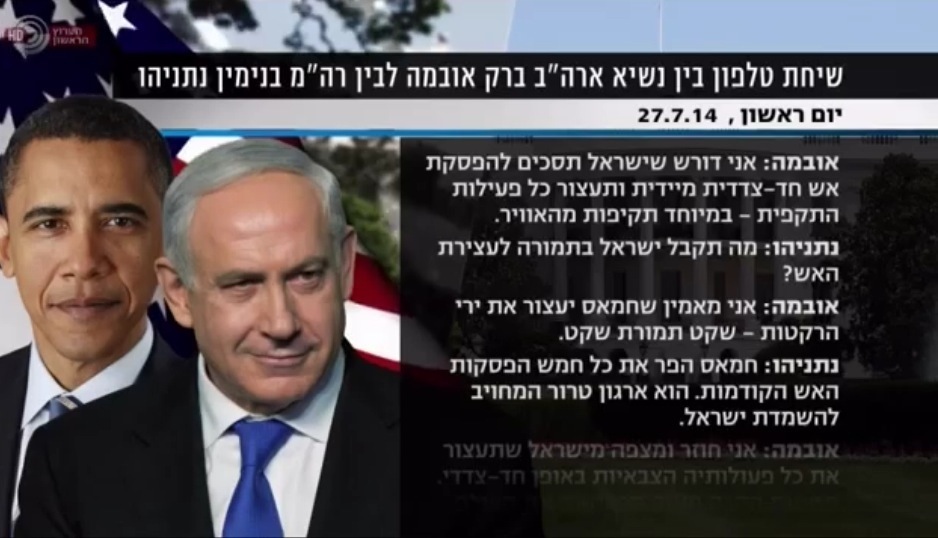 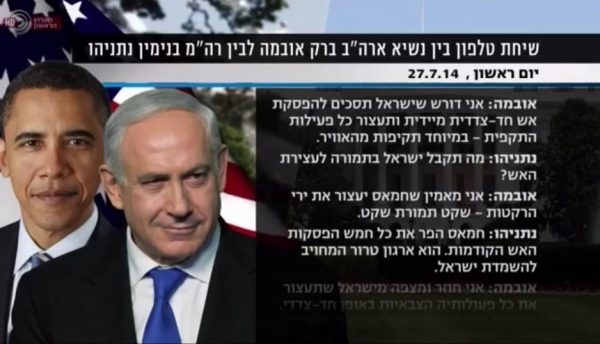 Publicly, both sides are denying this. But Obama is a liar, an unabashed, pathological unconscionable liar (“You can keep your doctor,” “Not a smidgen of corruption” at the IRS, “Benghazi was a spontaneous attack because of a YouTube video”). And Bibi is in no position to upset the jihadophile in the White House.

But if true — it gives us a glimpse at the monster running the country.

There are so many alarmingly wrong things that jump out from this short transcript, it is like the US was hijacked by a MB agent…

Channel 1 reporter says PM-POTUS transcript legit: Despite rejections by American and Israeli officials, Channel 1′s Or Nahari insists that the transcript leaked to him by a “senior American official” is authentic, but acknowledges that the quotes he published were merely an except from a long conversation. (TOI)

The State Department is running for cover. They can leak Israel intel that jeopardizes their national security  (here and here too) but don’t reveal what Obama is actually doing.

It certainly hurts Israel to alienate Obama but maybe Israel wants the world to know what a savage Obama really is.

Below is a transcript that was reported on the IBA (Israel’s Broadcasting Authority – Chanel 1 TV – Israel’s PBS) 7.29.14, 20:00, main news broadcast from the IBA international reporter Oren Nahari.

Before showing the verbal exchange between the two leaders, Nahari said he received the transcript of the 35 minute long conversation between Obama and Netanyahu that took place on Sunday, 7.27.14, from a “senior American source” that reveals a tense, harsh and unfriendly conversation between the two leaders, in which Obama lectures Netanyahu, displaying a condescending, rigid, unsympathetic position to Israeli concerns which can only be interpreted as outright hostile…

Obama: I demand that Israel agree to an immediate, unilateral cease fire and stop all offensive activities, especially air attacks.

Netanyahu: What will Israel receive in exchange for a cease fire?

Obama: I believe that Hamas will stop shooting their rockets, quiet will be answered with quiet.

Netanyahu: Hamas has breached all five previous cease fires; it’s a terror origination that is committed to the destruction of the state of Israel!

Obama: I expect Israel to unilaterally stop all of its military activities; the images of destruction from Gaza are moving the world further away from Israel’s position.

Obama: A week after Israel ends its military activities, Qatar and Turkey will begin negotiations with Hamas based on the 2012 understandings which include an Israeli commitment to remove the blockade and other restrictions from Gaza.

Netanyahu: Qatar and Turkey are the biggest supporters of Hamas. You can’t rely on them to be honest brokers.

Obama: I trust Qatar and Turkey… Israel is not in a position to choose the mediator.

Netanyahu: I warn that Hamas will be able to continue launching rockets and use tunnels for terror attacks…

Obama (interrupting Netanyahu): The ball is in the Israeli court and it must stop all military activities.

From Israel Chanel 1 TV: Transcription of the conversation Obama and Netanyahu – In Hebrew

The Prime Minister’s Office says in a statement that the Channel 1 report is false, using precisely the same words as the White House.

“We have seen these reports, and neither the reports nor the alleged transcript bear any resemblance to reality. It’s shocking and disappointing that someone would sink to misrepresenting a private conversation between the President and the Prime Minister in fabrications to the Israeli press,” the PMO says.