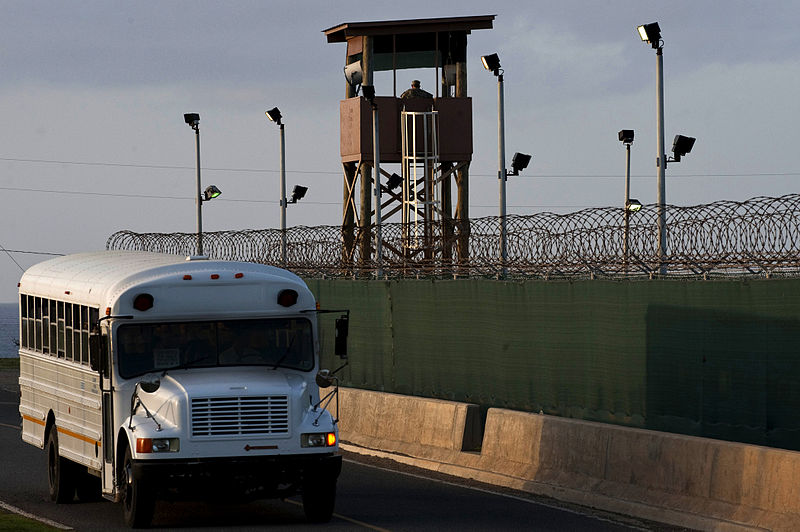 If the worst Ebola outbreak in recorded history reaches the United States, federal law permits “the apprehension and examination of any individual reasonably believed to be infected with a communicable disease”.  These individuals can be “detained for such time and in such manner as may be reasonably necessary”.  In other words, the federal government already has the authority to round people up against their will, take them to detention facilities and hold them there for as long as they feel it is “reasonably necessary”.  In addition, as you will read about below, the federal government has the authority “to separate and restrict the movement of well persons who may have been exposed to a communicable disease to see if they become ill”.  If you want to look at these laws in the broadest sense, they pretty much give the federal government the power to do almost anything that they want with us in the event of a major pandemic.  Of course such a scenario probably would not be called “martial law“, but it would probably feel a lot like it.

If Ebola comes to America and starts spreading, one of the first things that would happen would be for the CDC to issue “a federal isolation or quarantine order”.  The following is what the CDC website says about what could happen under such an order…

Isolation and quarantine are public health practices used to stop or limit the spread of disease.

Isolation is used to separate ill persons who have a communicable disease from those who are healthy. Isolation restricts the movement of ill persons to help stop the spread of certain diseases. For example, hospitals use isolation for patients with infectious tuberculosis.

Isolation and quarantine are used to protect the public by preventing exposure to infected persons or to persons who may be infected.

In addition to serving as medical functions, isolation and quarantine also are “police power” functions, derived from the right of the state to take action affecting individuals for the benefit of society.

“Isolation” would not be a voluntary thing.  The federal government would start hunting down anyone that they “reasonably believed to be infected with a communicable disease” and taking them to the facilities where other patients were being held.  It wouldn’t matter if you were entirely convinced that you were 100% healthy.  If the government wanted to take you in, you would have no rights in that situation.  In fact, federal law would allow the government to detain you “for such time and in such manner as may be reasonably necessary”.

And once you got locked up with all of the other Ebola patients, there would be a pretty good chance that you would end up getting the disease and dying anyway.  The current Ebola outbreak has a 55 percent percent mortality rate, and experts tell us that the mortality rate for Ebola can be as high as 90 percent.

Once you contracted Ebola, this is what it would look like…

The “external bleeding” may include bleeding from the eyes, ears, nose, mouth and just about every other major body cavity.

So how is Ebola spread?

Well, medical authorities tell us that it can be spread through the blood, urine, saliva, stools and semen of a person or animal that already has Ebola.

If you are exposed to the disease, the incubation period can be from anywhere from two days up to 21 days.  But the average is usually about eight to ten days.

In other words, you can be spreading it around for over a week before you even know that you have it.

There is no vaccine for Ebola and there is no cure.

Not everyone dies from the virus, but most people do.

Needless to say, this is about the last disease that you want to catch.  And the doctors that are treating Ebola patients in Africa are going to extreme lengths to keep from getting it…

To minimise the risk of infection they have to wear thick rubber boots that come up to their knees, an impermeable body suit, gloves, a face mask, a hood and goggles to ensure no air at all can touch their skin.

Dr Spencer, 27, and her colleagues lose up to five litres of sweat during a shift treating victims and have to spend two hours rehydrating afterwards.

They are only allowed to work for between four and six weeks in the field because the conditions are so gruelling.

At their camp they go through multiple decontaminations which includes spraying chlorine on their shoes.

But despite all of those extraordinary measures, multiple doctors have already gotten sick.

For example, one of the doctors leading the fight against Ebola, Dr. Sheik Humarr Khan, died on Tuesday…

A doctor who was on the front lines fighting the Ebolaoutbreak in Sierra Leone has died from complications of the disease, Doctors Without Borders said Tuesday.

He was treated by the French aid group Medecins Sans Frontieres — also known as Doctors Without Borders — in Kailahun, Sierra Leone, up until his death, spokesman Tim Shenk said.

Dr. Kent Brantly, who was treating victims of the Ebola outbreak in Liberia, is currently being treated in an isolation unit in the Liberian capital, Monrovia, the AP reported Tuesday.

“I’m praying fervently that God will help me survive this disease,” Brantly said in an email Monday to Dr. David Mcray, the director of maternal-child health at John Peter Smith Hospital in Fort Worth, Texas. The Texas-born Brantly, 33, completed a four-year medical residency at the hospital, the AP said.

Brantly’s wife and two young children left Liberia to return to Abilene, Texas, days before he began to show symptoms of Ebola. They are being monitored for any signs of fever, a City of Abilene spokeswoman told the AP.

A second American, aid worker Nancy Writebol of Charlotte, N.C., is also stricken with Ebola, according to CBS/AP. Writebol had been working as a hygienist to help decontaminate people at an Ebola care center in Monrovia.

Something seems different this time.

But instead of trying to keep things isolated to a few areas, global health authorities are going to start sending Ebola patients to other parts of the globe.  For example, one German hospital has already agreed to start receiving Ebola patients…

A German hospital has agreed to treat Ebola patients amid widespread fears of a possible outbreak of the deadly disease in Europe. Over 670 people have already been killed by the disease in West Africa with doctors struggling to control the epidemic.

A German hospital in Hamburg agreed to accept patients following a request from the World Health Organization (WHO), Deutsche Welle reports. Doctors assure that the utmost precautions will be taken to make sure the disease does not spread during treatment. The patients will be kept in an isolation ward behind several airlocks, and doctors and nurses will wear body suits with their own oxygen supplies that will be burned every three hours.

Will Ebola patients also soon be sent to hospitals in the United States?

And of course there are many other ways that Ebola could spread to this country.  For instance, all it would take would be for one infected person to get on one airplane and it could all be over.

Federal authorities seem to have been preparing for such an outbreak for quite a while.  As my good friend Mac Slavo has pointed out, “biological diagnostic systems” were distributed to National Guard units in all 50 states back in April…

The Department of Defense informed Congress that it has deployed biological diagnostic systems to National Guard support teams in all 50 states, according to a report published by the Committee on Armed Services. The report, published in April amid growing fears that the Ebola hemorrhagic fever virus might spread outside of West Africa, says that the portable systems are designed for “low probability, high consequence” scenarios.

Let us certainly hope for the best.

Let us hope that this latest outbreak fizzles out and that we won’t even be talking about this by the end of the year.

But experts are warning that if a major global pandemic does break out that millions upon millions of people could die.

If that happens, many people will go crazy with fear.

And we got just a little taste of some of the paranoia that an Ebola epidemic in America would create in Charlotte, North Carolina earlier this week…

A corridor of Carolinas Medical Center – Main’s Emergency Room was roped off on the first floor, near the entrance Wednesday.

A security guard was posted outside, to prevent anyone from crossing the line.

During a 4 p.m. press conference Katie Passaretti, who is an infectious disease specialist with CMC, said precautions were put into place when patient was brought in Tuesday night.  The patient was traveling from Africa and arrived at the hospital around 11:30 p.m.

Around 3 a.m. the security precautions were put into place at the hospital, Passaretti said.

Passaretti said they determined the patient did not have Ebola.  The patient has been discharged home.

It is not too hard to imagine forced quarantines and people being rounded up and shipped off to Ebola detention facilities.

In fact, if Ebola were to start spreading like wildfire in this country, many people would actually start demanding such measures.

For example, one member of Congress is already proposing that citizens of Guinea, Liberia and Sierra Leone (and any foreigner that has recently visited those nations) be kept out of the United States…

In a letter addressed to Secretary of State John Kerry and Department of Homeland Security Secretary Jeh Johnson, Alan Grayson, a Florida Democrat, proposed that citizens of Guinea, Liberia and Sierra Leone, as well as “any foreign person who has visited one of these nations 90 days prior to arriving in the United States” be kept out of the country. He urged the secretaries to “consider the enhanced risk Ebola now presents to the American public”.

What do you believe will happen if Ebola comes to America?