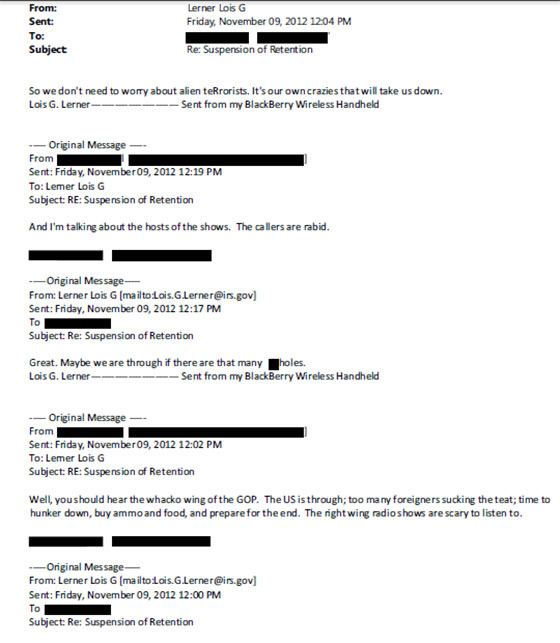 So the big breaking news story yesterday and today is that some of Lois Lerner’s emails have been found and she happened to call some conservatives “assholes.”

I resemble that remark.

I’ve called her worse than that and never once did I make the newspaper. I guess I’m not rich enough or famous enough for that.

Does it prove that she might have had a bone to pick with conservative groups?

Sure. But didn’t we already know that?

Does it prove that she might have been motivated to target certain conservative groups?

That depends on how you look at it.

I might call Lois Lerner a name, in private, but I wouldn’t be prone to break the law to cause her any grief. I suppose this does build upon our suspicions but, more than that, it just simply makes us angry. That is exactly what they want.

I get supremely frustrated with these stories sometimes. That might be a bit hypocritical for me to say because we have carried several of them and some were even written by me. However, we already know that the whole story is not being told here. And it is non-stories like these that make headlines while the much bigger story is really the fact that our legislators are spineless and have done little or nothing to try to get those lost emails.

Come on guys and gals. After all of this time your stunning revelation is that Lois Lerner called me (because I am a conservative) an asshole?

The real story is how Americans are being played by those that say they are on our side.

At any rate, The Blaze reports:

New emails uncovered by the House Ways and Means Committee indicate that former IRS employee Lois Lerner has a strong dislike of some conservatives, and at one point called them “assholes” in an email exchange.

The committee released an email Lerner received in November 2012 complaining about the “whacko wing of the GOP.” The person mocked conservatives for believing there are “too many foreigners sucking the teat” and that it is “time to hunker down, buy ammo and food, and prepare for the end.” The person added that the “right wing radio shows are scary to listen to.”

Lerner replied, “Great. Maybe we are through if there are that many assholes.”

The other person then wrote, “And I’m talking about the hosts of the shows. The callers are rabid.”

Lerner replied, “So we don’t need to worry about alien terrorists. It’s our own crazies that will take us down.”

This is the news that goes viral folks. It won’t here because I am not giving the old “Rah, rah let’s bury the progressives” speech, among other things. I guess I don’t have that in me today. I’m just not feeling really good about supporting the Republican establishment at present. But make no mistake, these are the stories that get released by big media outlets and are seen by millions of people in a matter of hours.

Shouldn’t the real story be that our elected leaders do nothing but throw us an occasional bone to appease us?

How long has it been now since we first met Lois Lerner? It’s been well over a year since Lois Lerner became a household name. In that year we have been able to prove that she called us “assholes.”

Why is it that we are hearing a story of all of these lost emails and nothing is being done about it?

They use the story to keep one side of the aisle angry while we keep sending campaign contributions and giving these scoundrels encouragement. I am sick and tired of it. I’m sick of seeing Trey Gowdy memes plastered all over social media as if he is some sort of god. I am sick of those who choose to worship politicians, rather than the one and only true God, and hang on their every word. That is not healthy. That is idolizing those who are not worthy of being idolized. And, in more cases than not we are making gods out of those who simply know how to “talk the talk” while promising to someday “walk the walk.” Yet that walk never seems to actually happen.

If they wanted those emails then there is good reason to think that they could get them from the NSA or a data backup company. A destroyed hard drive is nothing in this information age. Why does the NSA even collect data if it is not going to be called upon to use it?

America, you have been had. The Republican Party is simply there to stir up enough controversy to keep us divided. The same can be said for the Democrats. We are living with a one party system that simply disguises itself as being something more.

They have no intent of resolving this. There is no more real intent to resolve this than there is in providing definitive answers to Benghazi, Fast and Furious, Extortion 17 or any other scandal that grabs national headlines.

The real intent is to stir up more division and hate. They have proven nothing once again.

If you don’t believe that now, just keep observing and keep it in the back of your mind as a possibility. You will come to believe it someday if you continue to pay attention.

We are all sick of stories that lead nowhere.

We need to see results.

In other breaking news, Congress will soon take a well-deserved 5-week vacation…