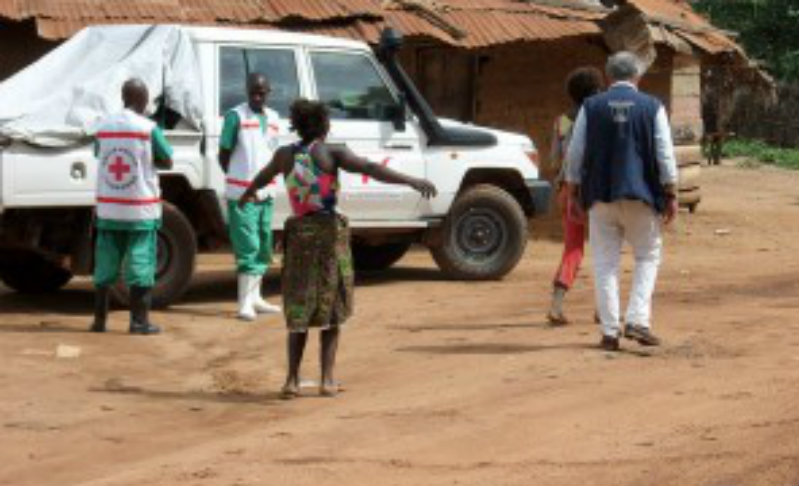 (INTELLIHUB) — A man named Patrick Sawyer, who traveled from Liberia to Nigeria, has been confirmed by world health officials to be infected with the deadly Ebola virus, justifying worst fears.

Mr Sawyer, a consultant for Liberia’s Finance Ministry, died on Friday after arriving at Lagos airport on June 20, having vomited and suffered diarrhoea on two flights.

The 40-year-old U.S. citizen had been to the funeral of his sister, who also died from the disease.

A woman quarantined at the Queen Elizabeth Hospital in Hong Kong has tested negative for the disease, despite returning from a trip to Kenya with Ebola-like symptoms.

So far, according to reports, only 59 people of the 30,000 have been identified and contacted by authorities. However, all of this sets a dangerous precedence as pandemic quarantine protocols can be abused by groups in power as everyone can now be considered a “suspect”.

Lizzie Parry, Emma Glanfield and Mario Ledwith continued on writing about the near future:

Professor Sunday Omilabu, from Lagos University Teaching Hospital, said health officials are in the process of tracing all those people who are thought to have been in contact with Mr Sawyer.

He said: ‘We’ve been making contacts. We now have information about the (flight) manifest.

‘We have information about who and who were around.

‘So, as I’m talking, our teams are in the facility, where they’ve trained the staff, and then they (are) now asking questions about those that were closely in contact with the patient.’

‘Because any and everybody that has contacted this person is going to be treated as a suspect.’

Now some, like myself, fear that the recent Ebola outbreaks may lead to the round-up of political dissidents and activists throughout the U.S. and potentially worldwide under some U.N. mandated protocol.

Moreover it has also been reported that the Department of Defense and FEMA are both working in conjunction to staff detention centers across the U.S. and if a pandemic quarantine is put into effect all hell is sure to break loose as simple things like grocery store visits will be few and far between. In fact, it’s likely to get so chaotic that no one knows what may happen for sure.

It’s also important to point out that it’s a $250,000 fine to violate a quarantine order in the U.S. and such a violation can even lead to imprisonment as established by the Department of Justice in recent years. In fact, CBS News reported back in April of 2009, during the H1N1 outbreak, DHS Assistant Secretary Bridger McGaw’s statements regarding the legalities of quarantine laws:

“The Department of Justice has established legal federal authorities pertaining to the implementation of a quarantine and enforcement. Under approval from HHS, the Surgeon General has the authority to issue quarantines.”

McGaw appears to have been referring to the section of federal law that allows the Surgeon General to detain and quarantine Americans “reasonably believed to be infected” with a communicable disease. A Centers for Disease Control official said on Tuesday that swine flu deaths in the U.S. are likely.

Federal quarantine authority is limited to diseases listed in presidential executive orders; President Bush added “novel” forms of influenza with the potential to create pandemics in Executive Order 13375. Anyone violating a quarantine order can be punished by a $250,000 fine and a one-year prison term.