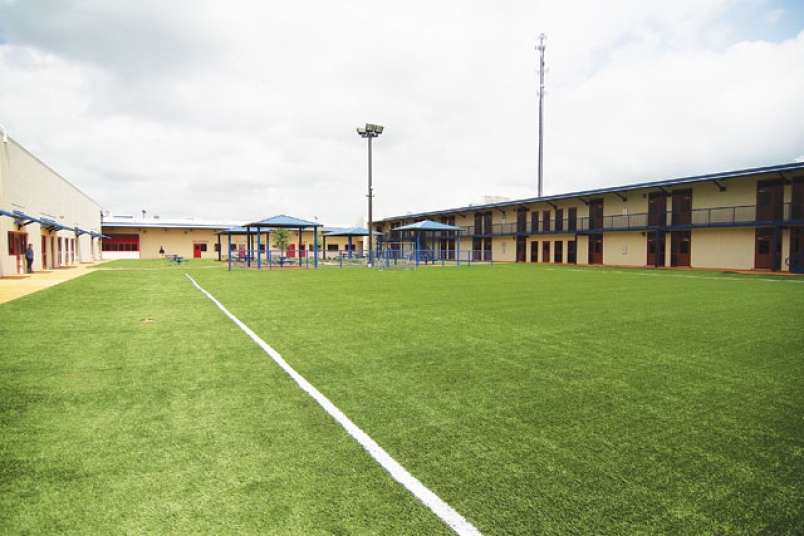 ABC 5 in San Antonio is reporting the grand re-opening of a remodeled “detention center” in Karnes City today. The center will include such amenities as flatscreen TVs, an onsite dentist, an artificial turf soccer field, basketball courts, ping pong tables, children’s play areas and, of course, all residents will be given six new sets of clothes while they are there.

They are no longer calling them “detainees.” Now they call them “residents:”

“I will refer to everyone in this facility as a resident. ICE generally refers to people in custody as detainees,” ICE San Antonio Field Office Director Enrique Lucero said.

The 532-bed facility has recently undergone a massive renovation. No numbers are being given as to the cost of that face lift. However, the fact that it took place just serves as further proof that the federal government knew what was about to happen at our southern border and refused to do anything about it.

Though we have no numbers as to the cost of the reconstruction efforts, we are being told that it costs the taxpayers about $140 per day/per person at this facility. Please allow that to soak in for a moment. That is per person and not for an entire family.

My entire family lives on about $140 a day if not a little less. Depending on where you live this can be a good amount of money. That is $980 a week or just shy of $51,000 a year for each person. Though the average stay is being quoted at 23 days, it still gives you a general idea of the overall cost that taxpayers are being forced to burden.

In a country where half of the wage earners now make less than $27,520 per year, the argument could be made that these people are being treated like royalty. They are certainly being treated better than most of us.

For those of you who are unaware, though this facility is for women and children, it is not just women and children who are getting our tax dollars and there is substantial evidence to prove that. In mid-July we ran a report and a video showing busloads of illegal immigrant adults (men and women) shopping at a Wal-Mart in North Carolina. If you didn’t see that video, you can find it here.

Is this what Obama wants 3.7 billion dollars for?

Once again the federal government is proving why this country is broke (and very much broken). They do not know how to responsibly budget money like a normal family would be forced to do.  That is one of the many reasons that so many families are hurting. Whether this is a “humanitarian” effort or not is still being hotly debated. However, no one has to my knowledge denied that these people are here illegally. So secure the damn border and send them back. Period.

It is the law and hard-working Americans can not afford anymore mouths to feed. My bleeding heart stops at the point that it effects the comfort and well-being of my own family. Taxpayers understand that. The tax-mongers do not.

The KRGV.com article (San Antonio Channel 5) is one of those must reads in my opinion, there is also a video with the article that I did not have permission to embed here. If it doesn’t make you angry to see your tax dollars in action like this, then nothing probably will.

How many of our own children lack the basic necessities being freely given to these kids that aren’t even here legally?

On a side note, someone please tell me when it’s time to start shooting.