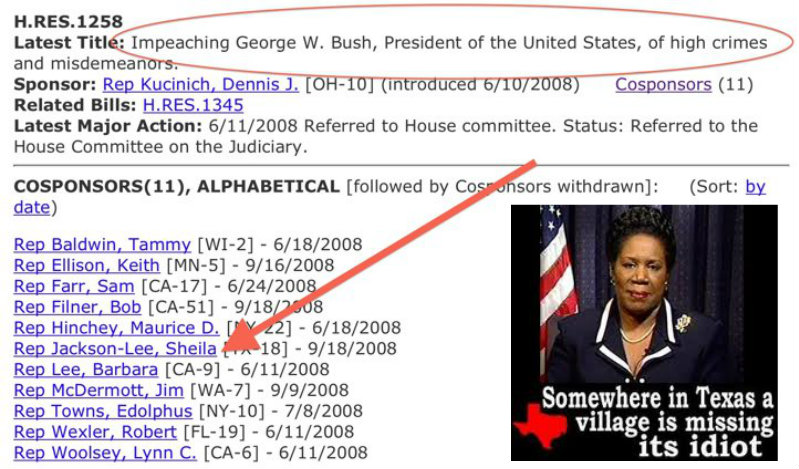 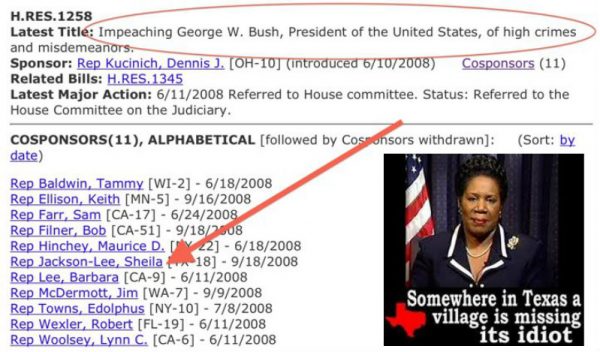 Sheila “Turn in Your Guns” Jackson Lee is a gaffe queen (who, incidentally, demands to be treated like a real queen by staffers).

Admittedly, some of Jackson Lee’s, er, more “zany” antics, have been harmless and quite amusing, like when she demanded that more hurricanes be given African-American sounding names, tried to close a public hallway for her visit with Michael Jackson, and claimed she was once a slave.

But, some of her actions and statements are more serious, and a few are downright disturbing.

Jackson Lee has been the U.S. Representative for Texas’s 18th congressional district since 1995. The district includes most of inner-city Houston.

She’s known for being one of the worst bosses in Congress – she’s lost at least 39 employees in the last 13 years – including 11 chiefs of staff. She reportedly called staffers names I won’t publish here (yes, they are THAT bad), and even threw a cell phone at one employee. Gladys Quinto, a former staffer, said Jackson Lee instructed her to write a memo about why she was incompetent in front of other staffers.

Jackson Lee also thinks the Constitution is 400 years old and is a big fan of Obama signing executive orders. Oh, and she also voted FOR HR 1960 – the National Defense Authorization Act for Fiscal Year 2014.

It was only a matter of time until  Congresswoman Jackson Lee offered up another gem. This time, she did it on camera. It happened on the House floor on Wednesday. Jackson Lee called Republican efforts to sue Obama nothing but a “veiled attempt at impeachment”.

Here’s the transcript of what she said, for clarification:

I ask my colleagues to oppose this resolution for it is in fact a veiled attempt at impeachment and it undermines the law that allows a president to do his job. A historical fact: President Bush pushed this nation into a war that had little to do with apprehending terrorists. We did not seek an impeachment of President Bush, because as an executive, he had his authority. President Obama has the authority.

Wait a minute, though. Either Jackson Lee has a terrible memory, is mentally deranged, or is a blatant liar, because not only did Democrats attempt to impeach Bush in 2008 – she was a co-sponsor of the bill to do it!

In a House Judiciary Committee meeting in July 2008, Jackson Lee stated her support for impeaching Bush, reports The Daily Caller:

“Whether or not we define it as high crimes and misdemeanors, which frankly I do believe we have a very firm basis of suggesting high crimes and misdemeanors because the impeachment inquiry made in this body – the Judiciary Committee – is what it is. It is a prosecutorial approach, it is the indictment, it is the question of determining whether we move forward,” Jackson-Lee said at the hearing.

“We should not be intimidated by the process or time,” she added.

Here’s relevant footage from that hearing:

Jackson Lee’s spokesman Mike McQuerry (the poor fella – I wonder if the good Congresswoman has hurled a cell phone at him yet) told Yahoo News “She misspoke” and declined to elaborate on what she meant to say.

Does “misspoke” mean “lied”? Call me a skeptic, but it seems unlikely that someone of Jackson Lee’s *ahem* high caliber wouldn’t forget being part of such an important endeavor like attempting to impeach a president.

Dwayne Horner of The PJ Tatler wanted to find out, so he called Jackson Lee’s office in Washington.

Horner asked the woman who answered the phone if she knew about Jackson Lee’s contradiction. The woman emphasized that she was NOT speaking for the congresswoman, and said, “We are aware that the congresswoman has made contradicting statements in her remarks on the floor.”

To that, Horner said, “Not as a representative but just as someone I am talking to, isn’t the fact that she said one thing in 2008 that is totally opposite of what she said yesterday – isn’t that really a lie?”

Horner wrote that the woman’s answer, “honest but shocking,” was “Yes I think that is a lie.”

Then he asked to speak to someone in the office to provide his thoughts on a congresswoman lying on the floor of the U.S. House of Representatives.

Horner said that from there, it “got crazy but not as crazy, and then a little crazier”:

I was transferred to a gentleman on Lee’s staff. When I again asked him about the contradiction and stated that perhaps I was confused, the man said “Oh look it here, we have one of those right wing, tea-bagger nut jobs on the phone taking his cues from FOX News.”

He then accused me of being un-American, raising his voice at me while asking me to calm down, and telling me that I am just on some mission to destroy our country. When I calmly asked for his name, he said “I don’t have to give to you because I don’t want to show up on some right wing blog and be on your Twitter account.” Keep in mind, I never said who I was – he just made assumptions and attacked me. When I reminded him that he gets paid by our tax dollars, he said “I doubt you even pay taxes and the IRS will find you soon enough,” and hung up on me.

Horner called back and asked to speak to the Chief of Staff for Congresswoman Lee. After being transferred, a man answered:

“This is the Chief Counsel, you have 15 seconds.”

When I asked him for his name,  he said “Chief Counsel.” Of course that’s not his name, and I said “No, I mean your name, not your title.”

Every time I asked, he counted down another second.

I told him that this was not confidential information and that I could do a Freedom of Information request. Click, and the call was over. He hung up on me.

I’m sticking with my initial assessment that Jackson Lee lied. Looks like her staff is trying to cover for her, lest they feel the wrath of the Queen of Mean.