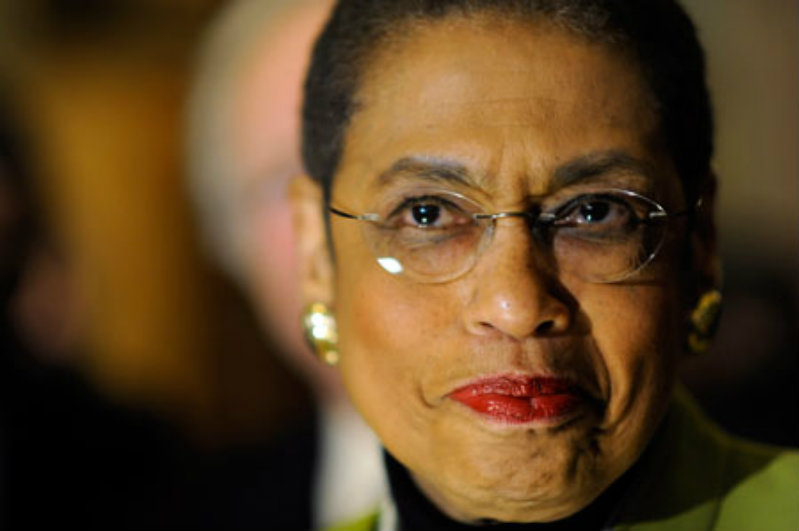 Why the District of Criminals (Columbia) has a delegate to Congress, I’ll never understand, especially since she can’t vote on the final passage of any legislation. However, Eleanor Holmes Norton doesn’t believe it is Congress’ job to know what is taking place in the White House, nor does she believe it is a proper check and balance between the Executive Branch and the Legislative Branch.

Ms. Norton obviously does not understand or is willfully ignorant (more likely) about the Oversight Committees authority and jurisdiction. They are primarily set up to oversee the Executive Branch. This is the same committee that has been having hearings on Benghazi, Fast and Furious and the IRS scandal. All of those were oversight of the Executive Branch.

She made the comments while protesting the committee’s Republican majority for voting to ignore a claim by the White House that David Simas, director of it’s Office of Political Strategy and Outreach, was immune to a congressional subpoena to testify. Republicans believe the office is being used a political campaign operation, a violation of federal election law.

Chairman Darrell Issa, R-Calif., noted he was not alleging any wrongdoing by Simas, but there was a history of violations involving that particular office in prior administrations that justified requesting his testimony.

Under President Obama, the White House has asserted sweeping executive powers, including the right to ignore pretty much all congressional inquiries. The administration has regularly ignored subpoenas from congressional committees.

Holmes was clearly down with that. She called Issa’s subpoena a “showcase fishing expedition.” She went on to argue that the Constitution’s separation of powers specifically gives the people who work directly under the chief executive immunity from subpoenas. “The president’s immediate advisor is not an agency and this is not a matter of policy,” she said, before going to further clarify that we “don’t have a right to know” everything that the administration does.

Remember, this is the same woman who blamed Republicans for the lack of signups for Obamacare and was caught in a voicemail acting as if she was owed money from a lobbyist. Yes, this same corrupt woman claims that Congress has no oversight over the Executive Branch, when that is the primary function of this committee in the first place.

In an article at the Legal Information Institute, we are informed that the basis for such oversight is not specifically found in the Constitution, but was exercised by both the British Parliament and the Assemblies of the colonies in America prior to the writing of the US Constitution. In fact, the House of Representatives appointed a committee “to investigate the defeat of General St. Clair and his army by the Indians in the Northwest and empowered it to ‘call for such persons, papers, and records, as may be necessary to assist their inquiries.'”

The article went on to state:

The Court has long since accorded its agreement with Congress that the investigatory power is so essential to the legislative function as to be implied from the general vesting of legislative power in Congress. “We are of the opinion,” wrote Justice Van Devanter, for a unanimous Court, “that the power of inquiry—with process to enforce it—is an essential and appropriate auxiliary to the legislative function. . . . A legislative body cannot legislate wisely or effectively in the absence of information respecting the conditions which the legislation is intended to affect or change; and where the legislative body does not itself possess the requisite information— which not infrequently is true—recourse must be had to others who possess it. Experience has taught that mere requests for such information often are unavailing, and also that information which is volunteered is not always accurate or complete; so some means of compulsion are essential to obtain what is needed. All this was true before and when the Constitution was framed and adopted. In that period the power of inquiry—with enforcing process—was regarded and employed as a necessary and appropriate attribute of the power to legislate— indeed, was treated as inhering in it. Thus there is ample warrant for thinking, as we do, that the constitutional provisions which commit the legislative function to the two houses are intended to include this attribute to the end that the function may be effectively exercised.”

While the power to inquire is indeed broad, it is not without its limits. Investigations by Congress are to be conducted only “in aid of the legislative function.” In other words, the limits of inquiry are on those things under the jurisdiction of Congress, namely legislation. Anything outside of that jurisdiction, is to be left to the Judicial Branch, which would be in accordance with the constitutional separation of powers.

So, since this issue involves the manipulating of the Executive Branch in what appears to be a violation of law Congress has passed, it would seem appropriate for there to be inquiry into the matter and if there is criminal activity, to then allow the courts to rule in the matter.

However, what one must remember about Barack Hussein Obama is his own words, “The only people that don’t want to disclose the truth, are people with something to hide.” And Obama’s supporters, among whom are Ms. Norton, will continue to help hide the truth from the American people.