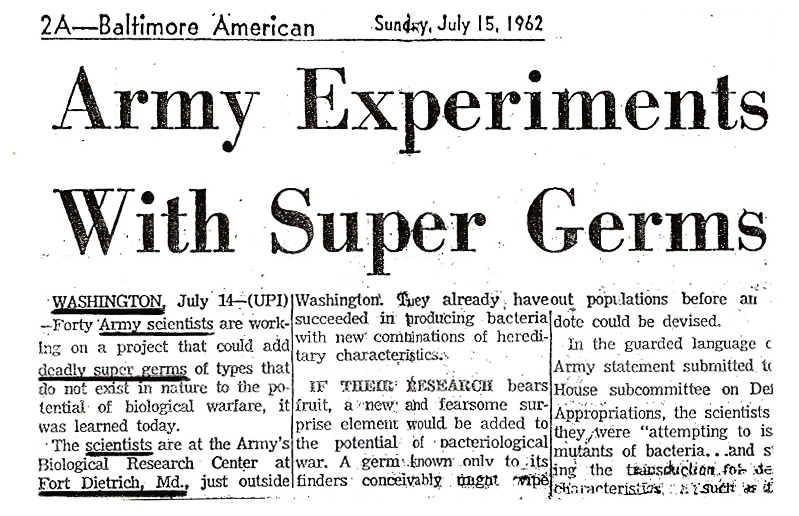 This is a call for an immediate, thorough, and independent investigation of Tulane University researchers and their Fort Detrick associates in the US biowarfare research community, who have been operating in West Africa during the past several years.What exactly have they been doing? Exactly what diagnostic tests have they been performing on citizens of Sierra Leone?Why do we have reports that the government of Sierra Leone has recently told Tulane researchers to stop this testing?Have Tulane researchers and their associates attempted any experimental treatments (e.g., injecting monoclonal antibodies) using citizens of the region? If so, what adverse events have occurred?The research program, occurring in Sierra Leone, the Republic of Guinea, and Liberia—said to be the epicenter of the 2014 Ebola outbreak—has the announced purpose, among others, of detecting the future use of fever-viruses as bioweapons.Is this purely defensive research? Or as we have seen in the past, is this research being covertly used to develop offensive bioweapons?For the last several years, researchers from Tulane University have been active in the African areas where Ebola is said to have broken out in 2014.

These researchers are working with other institutions, one of which is USAMRIID, the US Army Medical Research Institute of Infectious Diseases, a well-known center for biowar research, located at Fort Detrick, Maryland.In Sierra Leone, the Tulane group has been researching new diagnostic tests for hemorrhagic fevers.Note: Lassa Fever, Ebola, and other labels are applied to a spectrum of illness that result in hemorrhaging.Tulane researchers have also been investigating the use of monoclonal antibodies as a treatment for these fevers—but not on-site in Africa, according to Tulane press releases.Here are excerpts from supporting documents.Tulane University, Oct. 12, 2012, “Dean’s Update: Update on Lassa Fever Research”:“In 2009, researchers received a five-year $7,073,538 grant from the National Institute of Health to fund the continued development of detection kits for Lassa viral hemorrhagic fever.“Since that time, much has been done to study the disease. Dr. Robert Garry, Professor of Microbiology and Immunology, and Dr. James Robinson, Professor of Pediatrics, have been involved in the research of Lassa fever. Together the two have recently been able to create what are called human monoclonal antibodies. After isolating the B-cells from patients that have survived the disease, they have utilized molecular cloning methods to isolate the antibodies and reproduce them in the laboratory. These antibodies have been tested on guinea pigs at The University of Texas Medical Branch in Galveston and shown to help prevent them from dying of Lassa fever…“Most recently, a new Lassa fever ward is being constructed in Sierra Leone at the Kenema Government Hospital. When finished, it will be better equipped to assist patients affected by the disease and will hopefully help to end the spread of it.” [The Kenema Hospital is one of the centers of the Ebola outbreak.]Here is another release from Tulane University, this one dated Oct. 18, 2007. “New Test Moves Forward to Detect Bioterrorism Threats.”“The initial round of clinical testing has been completed for the first diagnostic test kits that will aid in bioterrorism defense against a deadly viral disease. Tulane University researchers are collaborating in the project.“Robert Garry, professor of microbiology and immunology at Tulane University, is principal investigator in a federally funded study to develop new tests for viral hemorrhagic fevers.“Corgenix Medical Corp., a worldwide developer and marketer of diagnostic test kits, announced that the first test kits for detection of hemorrhagic fever have competed initial clinical testing in West Africa.“The kits, developed under a $3.8 million grant awarded by the National Institutes of Health, involve work by Corgenix in collaboration with Tulane University, the U.S. Army Medical Research Institute of Infectious Diseases, BioFactura Inc. and Autoimmune Technologies.“Clinical reports from the studies in Sierra Leone continue to show amazing results,” says Robert Garry, professor of microbiology and immunology at the Tulane University School of Medicine and principal investigator of the grant.“We believe this remarkable collaboration will result in detection products that will truly have a meaningful impact on the healthcare in West Africa, but will also fill a badly needed gap in the bioterrorism defense.“…The clinical studies are being conducted at the Mano River Union Lassa Fever Network in Sierra Leone. Tulane, under contract with the World Health Organization, implements the program in the Mano River Union countries (Sierra Leone, Liberia and Guinea) to develop national and regional prevention and control strategies for Lassa fever and other important regional diseases.“Clinical testing on the new recombinant technology demonstrates that our collaboration is working,” says Douglass Simpson, president of Corgenix. “We have combined the skills of different parties, resulting in development of some remarkable test kits in a surprisingly short period of time. As a group we intend to expand this program to address other important infectious agents with both clinical health issues and threat of bioterrorism such as ebola.”The third document is found on the Sierra Leone Ministry of Health and Sanitation Facebook page, dated July 23. It lays out emergency measures to be taken. We find this curious statement: “Tulane University to stop Ebola testing during the current Ebola outbreak.”Why? Are the tests issuing false results? Are they frightening the population? Have Tulane researchers done something to endanger public health?In addition to an investigation of these matters, another probe needs to be launched into all vaccine campaigns in the Ebola Zone. For example. HPV vaccine programs have been ongoing. Vials of vaccine must be tested to discover ALL ingredients. Additionally, it’s well known that giving vaccines to people whose immune systems are already severely compromised is dangerous and deadly.Thanks to http://birdflu666.wordpress.com/ for discovering hidden elements of the Ebola story.Jon Rappoport is the author of two explosive collections, The Matrix Revealed and Exit From the Matrix, Jon was a candidate for a US Congressional seat in the 29th District of California. Nominated for a Pulitzer Prize, he has worked as an investigative reporter for 30 years, writing articles on politics, medicine, and health for CBS Healthwatch, LA Weekly, Spin Magazine, Stern, and other newspapers and magazines in the US and Europe. Jon has delivered lectures and seminars on global politics, health, logic, and creative power to audiences around the world. You can sign up for his free emails at www.nomorefakenews.com