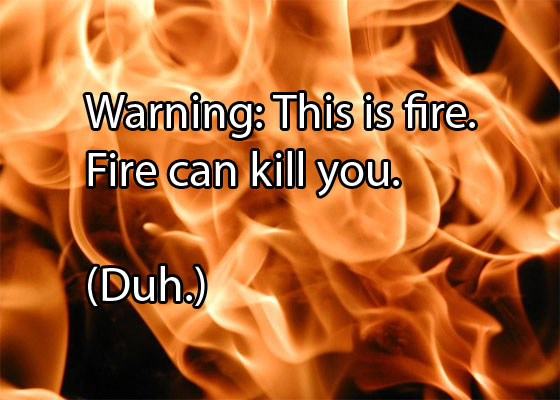 Quick answer: no, it isn’t self-immolation to protest important issues or even seemingly to make an important statement (unless that statement involves a bunch of mouth-breathing and drooling).

This has got to be one of the dumbest things I’ve read lately, and that’s in addition to a lady getting her finger bitten off by a lion turning around and suing the zoo even though there was a rather large sign clearly telling her not to put her hands in the cage AND the U.S. purposefully flying multiple Ebola patients here…you know…because…?

The new trendy thing for kids to do these days is apparently douse one’s self in alcohol or a liquid containing it, like perfume, and then lighting a match or a lighter…all of which is, of course, being filmed or photographed to share the lovely experience with friends online.

It’s a new trend called “fire challenge” that has spread through social media sites with kids putting up videos of themselves doing this on YouTube.

Exhibit A (Warning: For journalistic purposes only kids, DO NOT EMULATE):

Daisey Schumer tells KFVS-TV that she was lit on fire after someone poured perfume on her.

“This person poured the perfume on my stomach and then I told her to stop. Then she lit the lighter and I was rolling on the ground, trying to get it out and it burned my back,” Daisey told KFVS.

Daisey and her friend, Danielle Carter, said they saw “fire challenge” videos before on Facebook and YouTube.

“They poured alcohol on them and then they lit the lighter,” Daisey told KFVS of the videos she saw.

Daisey was hospitalized after suffering severe burns on her back from the “fire challenge.”

Cape Girardeau Fire Battalion Chief Mark Starnes said they are getting reports of more people going to the emergency room over this challenge.

“These kids are starting to challenge themselves more and more in a very dangerous way,” Starnes told KFVS.

At least one kid has already died during the commission of a “fire challenge”.

This is now prompting officials to actually have to make statements with the advice quote, “Don’t light yourself on fire.”

Question: when you set yourself on fire, what exactly do you expect to happen to you, other than be on fire?

Worse, somehow the fire challenge actually found a way to make all the kids who attempted the cinnamon challenge — which also carries substantial health risks — look absolutely brilliant by comparison.

I hate to say it, but this is exactly like that episode of South Park where the “cool kids” were filming themselves standing on train tracks and screaming no at oncoming trains forever before the trains actually hit and killed them.

(PUBLIC DISCLAIMER: Warning. The video below shows graphic cartoon violence. Do not emulate. That’s right. Officially. Don’t stand on train tracks and film yourself screaming no at an oncoming train until the train hits and kills you.)