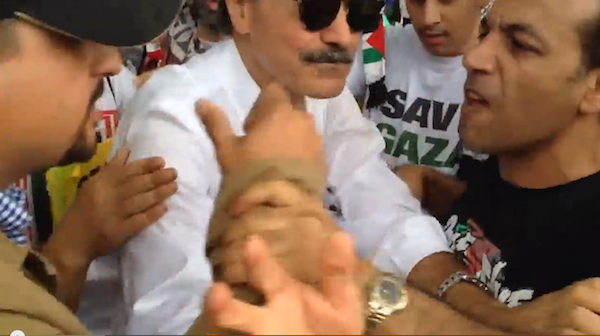 There was a pro-Hamas Jew-hating protest-cum-riot near the White House Saturday. There was a mob attack on a single pro-Israeli counter protester near the White House. The counter protester is an Iraq vet, a Puerto Rican, non-Jewish. But he was having a civil conversation with one Muslim and then, incapable of controlling their savage instincts, antisemitic America-haters started attacking him.

Islamic thugs and their leftist jackboots.

Islamic/leftist axis: Cosponsors of the rally are below.

On Saturday, a massive pro-Palestine and anti-Israel protest took place in Washington D.C. in front of the White House. The crowd, which numbered around 10,000 according to a DC police officer, shouted chants of “free, free Palestine,” “end the genocide,” and had a number of speakers appear, including left-wing professor Cornell West.

A group of pro-Israel protestors showed up — and were encircled by police with barricades. The crowd shouted at the group and blew blowhorns in their direction. The pro-Israeli group had to be escorted out of the crowd in police vans.

One pro-Israel protestor showed up on the other side of the crowd, alone, with an Israel flag in one hand and an an American flag in the other.

The pro-Palestine protestors grew belligerent — shouting slogans at him, giving him the middle finger. One tried to light his Israeli flag on fire.

But Manny Vega, an undeterred retired U.S. Marine and Iraq War veteran, spoke to Breitbart News about the incident.

“What brought me out here is this sort of anti-Israel atmosphere that this administration is holding over the United States,” Vega told Breitbart News. “I want to show the Israeli people there are American people in our nation that support the state of Israel… And that is why am standing here with an American flag on my right hand, and Israeli flag on my left hand, in a show of solidarity with the Israeli people.”

Vega argued with one pro-Palestine protestor, who said that the State of Israel had no right to exist and would not shake Vega’s hand.

“Israelis love life; they can coexist with other nations and they have since 1948. Israel has extended a hand to shake, but they shake it and go back to fight,” Vega reportedly told the protestor.

When asked if he was concerned about the protestors turning violent, Vega said:

“Hey, I’m not going to be pushed out of here… If I was in Palestine, my throat my throat would be slit, but I’m in front of the White House. This is America, and I have every right to be here with the American flag, and the Israeli flag as a counter protest to the ‘Free Gaza, Anti-Occupation’ protest here. And pro-Hamas.”

Breitbart News asked Vega if he had any concerns about immersing himself into a hostile crowd.

“I have no fear, Vega said. “I’m not going to get stabbed, or lit on fire, but they tried to light my flag on fire.”

The waves of pro-Palestine demonstrators continued to protest throughout the city, shutting down 15th street.

Pro-Palestine protestors gather in front of the White House.

Pro-Isreal counter demonstrators surrounded and barricaded in by police.

“When people criticize Zionists, they mean Jews. You’re talking anti-Semitism,” said Martin Luther King in response to a student who had attacked Zionism during a dinner event in 1968.

What an ugly Jew hater advancing every vile lie against the Jews. #Nabka #occupation –  disgusting lies.

“The Israeli Solution: A One-State Plan for Peace in the Middle East”: “Except during periods when he was physically barred from doing so — most recently during the Jordanian an occupation of these areas from 1949 to 1967 — Jews have lived in Judea and Samaria from time immemorial, just as they have lived in the rest of the historic land of Israel for the better part of 4000 years. Based on this historical connection, in 1922 the League of Nations granted the Jewish people sovereign rights to Judea and Samaria and the rest of Israel.

On May 15, 1948, the day the Jewish state declared independence, Jordan joined Egypt, Syria, Lebanon, and Iraq in invading Israel with the intent of annihilating it. Jordan ended the war in possession of northern, southern, and eastern Jerusalem as well as today and Samaria. Under international law, this was an illegal war of aggression. All Jews who had been living in the areas that the Jordanians conquered were expelled from their homes hundred for massacred or taken captive in Jordan. The official position of the Israeli government is that Israel has a right to sovereignty over the areas.”

The San Remo Conference was attended by Great Britain, France, Italy, and Japan — with the United States as a neutral observer. It was held in San Remo, Italy, in April 1920, and resolved to incorporate the Balfour Declaration in Britain’s mandate in Palestine. Thus Britain was made responsible “for putting into effect the declaration made on the 8th [sic.] November 1917 by the British Government and adopted by the other Allied Powers, in favor of the establishment in Palestine of a national home for the Jewish people.

The Mandate for Palestine was based on this resolution; it incorporated the 1917 Balfour Declaration and the Covenant of the League of Nation’s Article 22. Britain was charged with establishing a “national home for the Jewish people” in Palestine.]