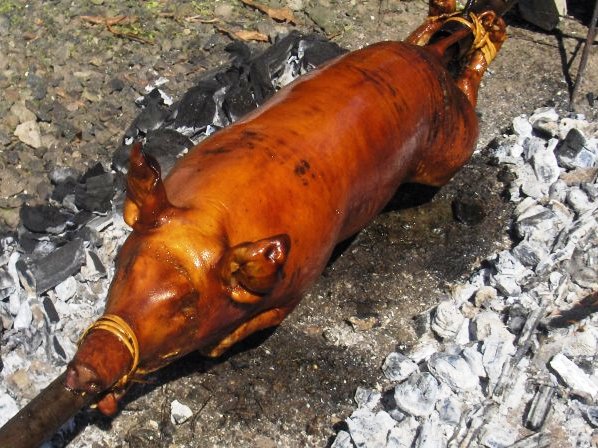 This, pnce again, demonstrates the true nature of Islamic supremacism. Observant Jews don’t eat pork either but they don’t care if you do and don’t insist that you don’t. As opposed to Muslims and the sharia, which asserts its authority over non-Muslims.

The British Broadcasting Corporation (BBC) has angered Muslim staff by hosting a hog roast to celebrate the Commonwealth Games beneath the windows of its Arabic TV service.

The Sun on Sunday reports that a whole pig was spit-roasted in the courtyard of New Broadcasting House in London, with the smell of pork drifting up through the windows of the mainly Muslim office. Workers described their “horror” at spotting the pig on their lunch break.

Islam forbids its followers from eating pork as pigs are considered “unclean” animals. The hog roast also happened on Friday, just days after the end of the holy month of Ramadan.

One Iranian journalist who saw the roast shared a photo before writing: “Horror in my lunch break at BBC New Broadcasting House”.

Although the BBC obsesses over “diversity” and issues all new employees with a survey that asks questions about their religion, sexuality, economic background and disabilities, it seems to have made an unfortunate slip in this instance.

One BBC insider told the Sun on Sunday: “Lots of people were furious about the hog roast as they felt it was disrespectful.

“The positioning so close to their offices made it seem that it was being flaunted in front of them.”

A BBC spokesman insisted that no “official” complaints had been made.