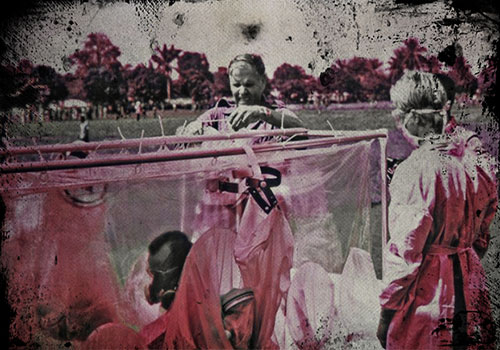 It’s all over the news, and just days after the State Dept. helped ship in America’s first Ebola patients… Hmm.

New York City’s Mt. Sinai Hospital has placed a man in isolation who recently returned from West Africa and showed up at the ER with a high fever and gastrointestinal symptoms — and the hospital’s statement on that sounds like it was scripted right out of a Hollywood movie:

“All necessary steps are being taken to ensure the safety of all patients, visitors and staff. We will continue to work closely with federal, state and city health officials to address and monitor this case, keep the community informed and provide the best quality care to all of our patients,” the hospital wrote in a statement.

Mt. Sinai is following what the Center for Disease Control recommended last week when they sent a Health Alert to doctors and hospitals.

The New York City Department of Health said, “After consultation with CDC and Mount Sinai, the Health Department has concluded that the patient is unlikely to have Ebola. Specimens are being tested for common causes of illness and to definitively exclude Ebola.”

Testing for Ebola is done at the CDC. According to a CDC spokesperson testing for Ebola takes 1-2 days after they receive the samples. The primary testing is PCR. This is performed on blood that has been treated to kill and live virus. So far CDC has tested samples from around 6 people who had symptoms consistent with Ebola and a travel history to the affected region. (source)

So this guy probably doesn’t have it, but the media blitz freak-out rip roaring scarefest roller coaster of rip rop rippidy roo was instantaneous. You might even say the country is a bit…on edge.

On the other hand, wow for coincidences! It’s a good thing the CDC just got done sending out that brand spanking new fact sheet the doctor references above, “Infection Prevention and Control Recommendations for Hospitalized Patients with Known or Suspected Ebola Hemorrhagic Fever in U.S. Hospitals”only a scant few days ago! Apparently it didn’t exist before August 1st. What are the odds?

And it’s also ever-so-timely that the city just got done hosting the largest ever surprise biological attack emergency drill in it’s entire history the same day:

More than 1,500 health department employees from more than a dozen agencies will be setting up 30 locations to be temporarily used to administer life-saving medication in the event of a biological outbreak…

An intentional release of a dangerous biological agent such as anthrax or smallpox into a massively crowded city like New York could go undetected for hours, days, or even weeks until symptoms are shown, according to the Department of Homeland Security.The drill comes in the wake of a severe outbreak of the incurable Ebola virus in west Africa that has claimed the lives of over 700 people, the World Health organization reports.

Again. What are the odds?