MSNBC reporter Chris Jansing was talking about the African leadership summit happening this week and allegedly misspoke. I say “allegedly misspoke” because there is nothing about this commentary that seems like a mistake to me. It seems like Jansing is more guilty of accidentally revealing her own version of the truth before backtracking, but you can decide that for yourself.

Jansing spoke to MSNBC’s Joy Reid about the ongoing meeting of American and African leaders in Washington D.C. “The White House is clearly, I would assume, hoping this will be part of the president’s legacy, given his background,” Reid said.

“Yeah, the fact that he’s from Kenya,” Jansing replied breezily. “And the fact that when he was elected there were expectations on the African continent that he would do great things for them.”

The reporter realized her misstatement about ten minutes later. “Yeah, and — and just obviously to clarify, I misspoke at the top — before,” she said. “It is obviously the president’s father who is from Kenya. And you clarified that.”

It does not appear that Chris Jansing misspoke to this author. Watch the video again. She is confident and making what she feels is a valid point. She was speaking her opinion and forgot momentarily that this did not fit with the chosen mainstream media narrative.

You simply can’t say that.

Was Obama born in Kenya?

Honestly I don’t know. I run stories like this because I am a truth seeker and I believe questions need to be asked. What I do know is that almost the entire media, left and right, refuses to discuss this topic. Do you remember when Breitbart.com broke the big story about Obama’s book publisher saying he was born in Kenya?

A lot of people probably don’t realize that there is a hideous and unnecessary disclaimer at the beginning of that article to explain that this doesn’t prove anything other than the fact that Obama said he was born in Kenya to possibly get more book sales. Those are my words, not Breitbart’s. Judge for yourself:

Andrew Breitbart was never a “Birther,” and Breitbart News is a site that has never advocated the narrative of “Birtherism.” In fact, Andrew believed, as we do, that President Barack Obama was born in Honolulu, Hawaii, on August 4, 1961.

Yet Andrew also believed that the complicit mainstream media had refused to examine President Obama’s ideological past, or the carefully crafted persona he and his advisers had constructed for him.

It is for that reason that we launched “The Vetting,” an ongoing series in which we explore the ideological background of President Obama (and other presidential candidates)–not to re-litigate 2008, but because ideas and actions have consequences.

It is also in that spirit that we discovered, and now present, the booklet described below–one that includes a marketing pitch for a forthcoming book by a then-young, otherwise unknown former president of the Harvard Law Review.

It is evidence–not of the President’s foreign origin, but that Barack Obama’s public persona has perhaps been presented differently at different times. 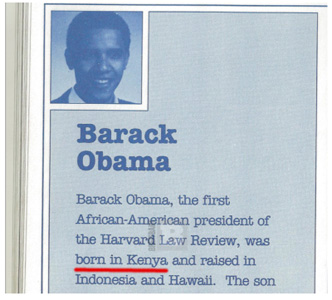 I am not sure why Breitbart even ran the article and showed the picture of Barack Hussein Obama’s bio, if they did not intend to actually pursue the story. It is possible that Obama said this to sell more books, but it is also possible that he really was born in Kenya.

If you look around then you will quickly see that even some of those publications, that you once believed were on your side, are nothing more than a mouthpiece of the establishment republicans. They will give the appearance of conflict between the left and right, because they cater to their market, but will only take it so far, just like our spineless representatives in D.C.

Andrew Breitbart may not have been a birther but he did seek the truth. Interestingly enough, he spoke to Sheriff Joe just hours before his death. Did you know that? He was preparing to drop a major bombshell about the president and it ended up being a dud. A lot of people think he was murdered.

When I see a story on Daily Caller that is titled MSNBC Reporter Accidentally Claims Obama ‘Is From Kenya’ [VIDEO], I get frustrated. Using the “accidentally” narrative in the title seems to imply that it was simply an honest mistake.

We don’t know that this was an “honest mistake.” Again, it appears to me that the reporter simply had second thoughts about what she said and retracted it for the good of “the team.”

I am a blogger and not a journalist. I will never say that I do not have an agenda. If you haven’t figured out that I am a far-right conservative then I am telling you now. That doesn’t mean that I will lie in order to push that agenda, but my interpretations may be a bit different than you will find elsewhere. When “conservative” right-wing sites begin to cover for Obama, just like their left-wing counterparts, what hope do we have of ever finding the truth?

They put these stories out there like, “Hey this is funny but it doesn’t mean anything.” They act like they are obligated to report the stories as a means of damage control.

There is enough evidence out there for Obama’s birthplace to be investigated. I am not saying he was born in Kenya, but I am telling you that there have been enough instances of circumstantial evidence to put together a full-blown investigation and yet very few other than Taitz, Sheriff Joe and BirtherReport.com seem to care.

It surely doesn’t help when the “conservative” media does not have the guts to go there. Good journalism is supposed to be about asking tough questions, not about hiding your head in the sand to save yourself from potential embarrassment.

Embarrassment is my middle name. My pursuits may not always lead to where I think they are going but I refuse to hide like the wussies in the mainstream.