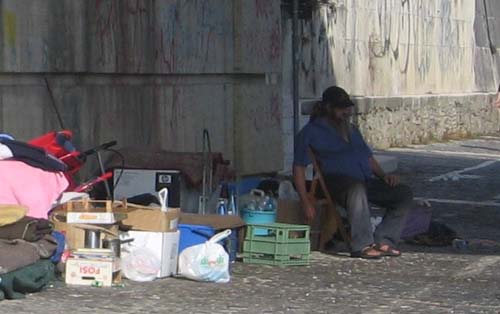 As they say, you can always judge a society by how they treat their weakest members. So I shudder to think of how future generations will judge our society. We’ve become a nation that discards our poor like they are trash, and anyone who doesn’t “fit in” is segregated from the herd.

The police are now fining homeless folks for any arbitrary offense they can think of, and city councils across the country are making it illegal to sleep in public. They’ve gone so far as to make it illegal to camp, or even sit or lay down in certain public areas. Worst of all, many cities are making it illegal, or prohibitively expensive to give food to the homeless. According to an interview from The Independent, with a former police chief involved in a charity dedicated to feeding the poor:

The homeless are an embarrassment for the town, said Arnold Abbott, a 90-year-old former police chief from Pennsylvania and director of Love Thy Neighbor, an organization that has been feeding homeless here for over 20 years. Five times the city has tried and failed in court to stop him serving meals each Wednesday on the beach beneath the tourist strip.

The town, he said, really wants the homeless to go away. “They would like to put them in a bus and send them to Miami or Palm Beach. It’s very close to ethnic cleansing. But they are not going to succeed.”

Thank God there are still some people willing to do the right thing, even if it means breaking the law. In other cities, you now need a 500$ permit from the health department to give away food, or perhaps you’ll have to spend 800$ to rent the park every time you try to hand out food there. On the surface, it’s bad enough that they are making it so difficult to help out those in need, but when you take the homeless out of the equation, it starts to sound really asinine. To the city councils out there that are perpetuating these laws, are you really going to make it illegal for one consenting adult to buy a sandwich, and voluntarily give it away for free to another adult who wants it? When it’s phrased that way, doesn’t it just sound utterly contemptible and insane?

In LA, things may be about to get downright draconian. If this whistleblower is to be trusted, then the city of Los Angeles is preparing to force their homeless population into internment camps. Of course it would never be called that. They would simply be referred to as ‘low cost housing’ or maybe they’ll just call it a homeless shelter, but with the caveat that once you enter, you wouldn’t be allowed to leave. This would probably be disastrous for anyone entering the facility, as many homeless shelters are notoriously awful and dangerous places. After all, if most shelters provided a safe and healthy environment, would there really be that many people on the streets? So they’re going to make a “homeless shelter” that you’re not allowed to leave? I’m sure that place will just be a ray of sunshine won’t it? But as you’ll see next, finding alternatives to a shelter can end disastrously if you have a family.

Last month, a family in Houston had their kids taken away by CPS, when it was discovered that the family had been living in a storage unit for the past three years. The family had fallen on hard times after the father had lost his welding job, and after getting a job with maintenance at the storage facility, decided that living in a unit there would be far safer for his family than a homeless shelter. By all appearances, these are otherwise lawful and caring adults just trying to provide the best they can for their family in a difficult economy.

There were no reports of abuse, and the unit had air conditioning and two computers. While it lacked running water, if they’ve lived there for 3 years without anyone getting severely ill, then it’s safe to assume that they’re doing their “business” in a proper bathroom somewhere else. They obviously have permission from the owners of the storage facility to live there, or they would have been kicked out a long time ago. So what’s the problem? What did they do to deserve this?

They happened to be poor, that’s what they did. This is what it means to live in America now. If you fail to achieve a certain income, then you are now at the mercy of the authorities (or God knows who else on the streets). And if you really think about it, if the government is going to treat the poor like this, then there is no reason to have a government in the first place. I thought that the main reason we have a government, is because life without them would be hell. It would be a chaotic place where the weak are indiscriminately killed, or are abused and exploited by the strong. At least that’s what we’ve been told.

If the poor are being treated this way, then our modern society is just as much of a Darwinian struggle as it was for our primitive ancestors. If that’s the case, can we even call what we live under, a government? Keep in mind, I’m not asking the government to step in and help. I’m not asking for them to provide free housing or increase welfare entitlements. I’m asking them to stay out of the way. How could you make it so difficult for private citizens to help each other out?

Perhaps what I said at first was wrong. Maybe our society isn’t so bad. Future generations won’t judge us for how we treat our fellow man. Plenty of private citizens have done their part to help the homeless.

No. They’ll judge our government, for breaking up families, fining people with no money, starving them, and then throwing them into internment camps.