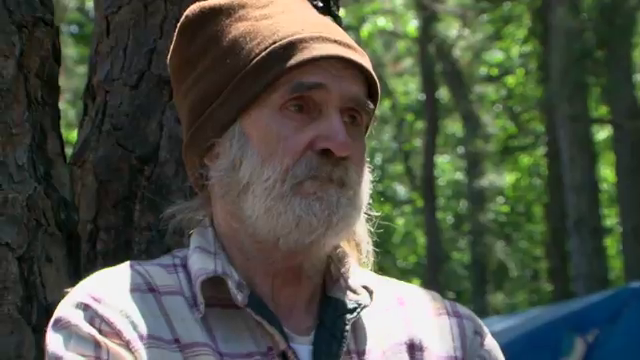 Sam is a 70-year-old man who lived in Tent City, an encampment site in the forest in Lakewood Township, NJ.

He lived in a home he constructed out of a wood frame and tarps.

Last month, the camp, which housed 80-120 people over the last ten years or so, was closed by local authorities. Housing structures in the camp were demolished.

Police State USA reported that Sam was one of the unfortunate souls who lost his home when the government decided to come in and destroy the camp:

An impoverished man learned the true nature of government as he watched tearfully as bureaucrats demolished his ramshackle home in the woods.  He was bothering no one except the government.

After years of threats, the local authorities of Lakewood Township finally had Tent City closed down, and all residents evicted from the forest.  The homes that existed there — some for years — were ripped to the ground using heavy machinery.

“Can I watch?” asked Sam, when his home — a wood-framed shelter covered with tarps — was destroyed.  Sam’s lip trembled as he stood next to the public servants overseeing the demolition. It was an emotional sight.

The Huffington Post, in their 2012 coverage of Tent City’s impending closure, described how the camp operated:

They live with little electricity and without a modern sewage system. Instead, they use propane tanks for heat and a pump that sends water to a generator-powered washing machine and shower housed in a shack.

The camp is funded by donations from churches and temples whose members visit daily, and has survived on a budget of around $1,000 a month. In this thriving community, complete with a chapel, a TV room and bi-monthly Alcoholics Anonymous meetings, new residents arrive every few weeks.

Residents of Tent City were making the best of a tough situation, and didn’t want government intervention or assistance. Of course, the authorities just can’t leave people alone, and had to intervene.

In fact, Lakewood set aside nearly $400,000 in municipal and federal tax dollars for Tent City’s closure. Officials expect the final tally will top $600,000.

Wouldn’t it have been cheaper to leave them in peace?

In addition to spending approximately half a million dollars to close the camp, the government is paying to relocate the displaced residents – at an estimated cost of $750,000:

Under a consent agreement reached last March, the township agreed to pay the rent, capped at $1,050 per month, for Tent City residents for a year while they got back on their feet.

Deputy Mayor Albert Akerman said Lakewood is paying more than one million dollars to relocate the homeless who agreed to be counted in the census, as per court order. “People are very, very upset because their taxes are going up this year and they felt like year after year we were spending a lot on Tent City and they felt like it’s one place to cut.” (source)

Tent City residents who were counted in last year’s census will receive those relocation benefits. Fifteen residents were not counted and will only be covered for a two-week stay in a local motel.

“They’ve got no place to go in Ocean County. They’re extremely nervous and upset because they don’t know what the future holds for them. This is the only place they know to call home.”

Brigham added that although various nonprofit groups have offered help in relocating the residents, providing transportation to a shelter in Atlantic County isn’t the type of help they need. He said Tent City appears to be their best option:

“Food, clothing, shelter.  I’m sure they’ve looked around. They’ve assessed the situation. They see what Atlantic City Mission looks like and what it runs like. You have to leave during the day and wander the streets and you’re just another number. There’s no community.”

“The townships have created ordinances that say you have to have so much property before you can build a house. And what that does, is that chases out the poor person.”

They can’t win, can they? The government essentially makes it illegal to BE homeless, yet their policies are often the REASON people end up without anywhere to go.

A lot of the people who lived in Tent City don’t have the skills, resources, or support system to get jobs and be able to afford housing in Ocean County, according to Brigham.

But some of the camp’s former residents were once gainfully employed and are victims of the dire economic situation in the US.

Marilyn Berenzweig was one of those people. She shared her story with The Huffington Post:

A textile designer, she earned $100,000 a year and lived a comfortable New York City life with her husband, a former radio producer. They paid $2,000 month for their apartment, kept a vegan diet, and had had a soft spot for pet birds — ultimately collecting so many that they devoted a room to housing them.

But her world came crumbling two years ago when she lost her job in the recession. Like many of the jobless, Berenzweig couldn’t fund her old lifestyle with meager unemployment payments. She downsized. She moved from place to place.

Today, Berenzweig eats, sleeps and entertains in a two-person tent in the middle of the woods. On her recent 61st birthday, she was one of dozens of people, from the chronically homeless to former professionals like herself, who have come to call such places home.

“We’re too young for Social Security and too old to to be trained for another job,” she said recently, standing by a makeshift kitchen table under a tarp outside her tent. “So here we are.”

As Joshua Krause explains in his article It’s Official: Being Poor in America Has Been Outlawed, we’ve become “a nation that discards our poor like they are trash.” Homeless people are being fined for arbitrary offenses and are being prohibited from sleeping in public. Some cities have even made it illegal or ridiculously expensive to feed the homeless. Krause suggests that there really isn’t a point in having a government in the first place if they are going to mistreat the poor – in fact, he says, “I’m not asking the government to step in and help. I’m not asking for them to provide free housing or increase welfare entitlements. I’m asking them to stay out of the way. How could you make it so difficult for private citizens to help each other out?”

Indeed – why can’t the government just let us take care of each other? Americans are known for being generous – in fact, we donate billions on an annual basis:

Every year, American individuals donate more than $200 billion to charities. Tens of billions of dollars more reach US charities through foundations and other family- and individual-giving vehicles. This giving, far more in volume than any other country in the world, has engendered much praise for the generosity of the American public. Politicians, commentators, and public officials all frequently congratulate Americans for being the most generous people on earth. (source)

Tent City was operating on donations, and was mostly left undisturbed by the local authorities for nearly a decade  – why the sudden push to close it and force its residents to suffer further?

Deputy Mayor Akerman said Lakewood plans to plant 15,000 trees on the site – funded by a grant from the NJ Turnpike Authority.

Could it be that the city has bigger plans for the area formerly occupied by Tent City?

That remains to be seen.

In the meantime, an upcoming documentary about Tent City is in the final stages of production. The film, called Destiny’s Bridge, “questions the human rights of the poor while exploring new ideas for housing the homeless.”