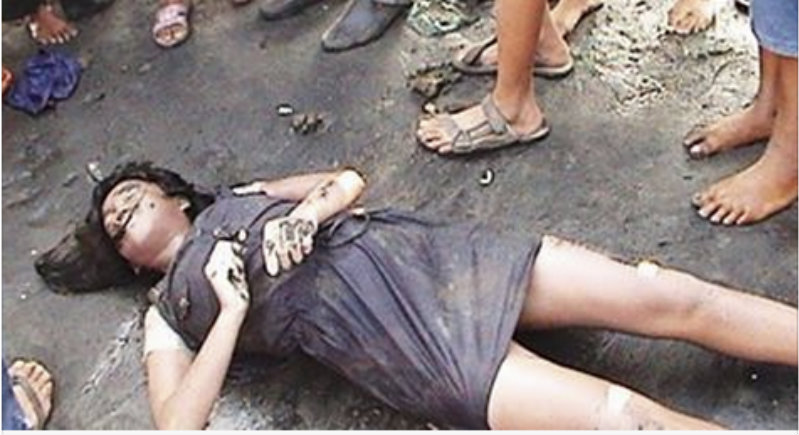 If the world thinks that pretending that this is not happening, or worse, ignoring it, is going to spare them the same fate, they are gravely mistaken.

This is the jihad that Obama aided and abetted in ushering in. This is Obama’s Libya — after his surrender in Benghazi.

The abduction of this young Filipino Christian took place only a few days after a Filipino construction worker was beheaded, amid allegations that he was killed for not being a Muslim.

But the UN seeks to prosecute Israelis for “war crimes” for defending themselves against this pox against humanity.

Every rational and freedom-loving man cannot fathom why the world is submitting to such savagery.

“Six Muslims Abduct Xtian Nurse From Her Home, And Gang Rape Her Over And Over Again,” by Eliyokim Cohen via Shoebat, August 6, 2014

A Filipino Christian nurse in Libya was abducted by Muslims from her home and gang raped by up to six Muslim men. According to one report:

A Filipino nurse has been kidnapped and gang-raped in the Libyan capital of Tripoli.

The woman was seized outside her residence on Wednesday and taken to an unknown location, where she was sexually abused by up to six men, the Philippines’ Foreign Affairs spokesman Charles Jose told reporters.

She was released about two hours later and taken to hospital for treatment.

The incident took place only a few days after a Filipino construction worker was beheaded, amid allegations he was killed for not being a Muslim.

Following the latest incident, the Filipino government called for the evacuation of its 13,000 citizens in Libya, which has been rocked by violence in the last few months.

A recent report explains how the Filipino government is now escorting all of its people from Libya:

The Philippines has dispatched its foreign secretary to oversee the evacuation of 13,000 citizens from Libya after a Filipino construction worker was beheaded and a nurse gang-raped there.

Foreign Secretary Albert del Rosario said on Thursday he was flying to Djerba island in neighbouring Tunisia to “try to convince our people to leave [Libya] because the situation there is very dangerous”.

The Philippine government ordered a mandatory evacuation on July 20, hours after the discovery in Benghazi city of the beheaded remains of a Filipino construction worker who had been abducted five days earlier.

On Wednesday a Filipina nurse was abducted by a gang of youths outside her residence in the capital Tripoli, then taken elsewhere where she was gang-raped by up to six suspects, the foreign department said.

She was released about two hours later and a Filipino consular team took her to hospital for treatment, a foreign department spokesman said.

“We condemn these crimes that have been committed against our people,” President Benigno Aquino’s spokesman Herminio Coloma said in Manila.

Why would the Muslims do this? Because their Filipino victims were Catholics, and anyone who has read Church History, will know what vicious and violent hatred Islam has had for the Papacy from the beginning. One news agency connected the rape and the beheading to the anti-Catholic vitriol of the Muslims in Libya:

Despite broad acceptance, the Filipino community has been harassed by Islamic extremists, partly because of the Catholic faith practiced by most Filipinos.

From the Reconquista to the Crusades, the Catholic Church was, and is still, the primary enemy of the Muslim heresy.