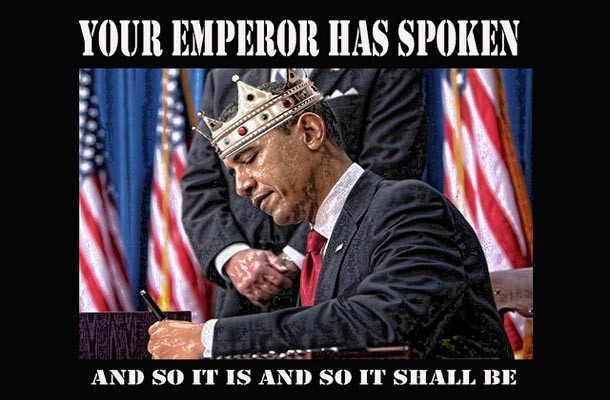 The single quotes in this article’s headline denote a paraphrase of something Obama basically said Wednesday at his U.S.-Africa Leaders Summit specifically in defense of his use of executive orders to bypass Congress whenever he feels like it.

“The American people don’t want me just standing around twiddling my thumbs and waiting for Congress to get something done,” Obama said.

Really? The American people don’t want the president of the United States to follow the Constitution?

I’m sorry, I can’t even finish typing that sentence.

Back to the present, earlier today the Business Insider reported,

The president repeatedly indicated he would prefer to work with Congress to find legislative solutions on a slew of issues including funding for federal infrastructure projects and the border crisis. However, in the face of what he described as “dysfunction” in Congress, Obama said he would “scour our authority to try to make progress” within the bounds of the law.

“I’m going to seize those opportunities and that’s what I think the American people expect me to do,” said Obama.

Nice, right? Obama is just going to “seize those opportunities”.

That’s right, the paid spokesman for The United States of America, Inc. then went on to make excuses about how, even though he can pass all these executive orders, he somehow can’t seem to sign one that would stop megacorporations from merging with foreign businesses and shell companies overseas to evade paying taxes…but, you know, he’ll look into it if he gets a chance.

The most infuriating thing about Obama saying these things isn’t even that he would excuse his overreach by pushing it off on the American citizens, but that he is even bothering to act like he has half a damn clue what the American people want or expect him to do at this point, or that he would muster up the strength to pretend to care even if he did.

But wait! I just remembered that corporations are people, too! So maybe those were the “American people” Obama was referring to in his statement.

BREAKING: Former Comedian Kathy Griffin Doubles Down… Admits She Advocated For Someone To Kill Trump On Twitter
May 27th, 2020 Right Wing Tribune

Kayleigh McEnany Fires Back at Chris Wallace: ‘Journalists Are Not Above Being Questioned’
May 28th, 2020 The Mental Recession

Pelosi Enacts Proxy Voting For House Members Against The Constitution