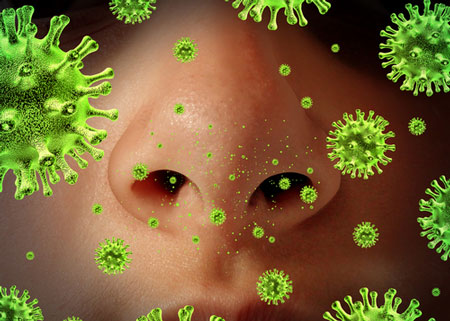 The CDC has confirmed fears of airborne transmission of Ebola.

The advisory urges airline staff to provide surgical masks to potential Ebola victims in order “to reduce the number of droplets expelled into the air by talking, sneezing, or coughing.” (emphasis mine).

The CDC is also directing airline cleaning personnel to, “not use compressed air, which might spread infectious material through the air.” (emphasis mine).

The CDC’s concern about the Ebola virus being spread via the air is understandable in light of a 2012 experiment conducted by Canadian scientists which proved that, “the ebola virus could be transmitted by air between species.”

Researchers demonstrated that the virus could be transmitted from pigs to monkeys without any direct contact by placing the two animals in pens separated only by a wire barrier. After eight days, some of the monkeys were found to have symptoms of Ebola likely as a result of “inhaling large aerosol droplets produced from the respiratory tracts of the pigs.”

The results of the study led scientists to conclude that, “limited airborne transmission might be contributing to the spread of the disease in some parts of Africa,” although they cautioned against making comparisons to the airborne nature of the influenza virus.

In addition, the Public Health Agency of Canada’s official website states under a section entitled “mode of transmission,” that “airborne spread among humans is strongly suspected, although it has not yet been conclusively demonstrated.” (source)

This means that maybe it really wasn’t a great idea for the American Ebola victim (that we knowingly imported back to the US on a plane) to waltz into the hospital in Atlanta on his own two feet, rather than being carefully transported in an isolation unit.  The government has already established quarantine centers and the President has passed an Executive Order making legal the forcible quarantine of individuals suspected of illness. Joshua Krause wrote just days previously that this Ebola outbreak was somewhat different than previous bouts of the dreaded disease, and it appears he was right.

It will only be a matter of time until vaccinations are made mandatory, and if you aren’t too keen about having an untested, rush-job drug injected into your body, it might be time to finalize your preparations to isolate your family in the event that this hits close to home.  It’s vital to get your supplies now, and beat the frantic horde when everyone else gets the same idea