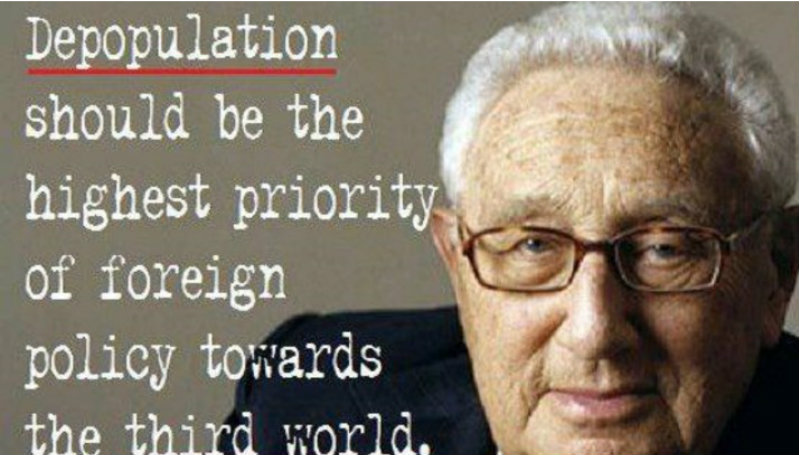 “War and famine would not do. Instead, disease offered the most efficient and fastest way to kill the billions that must soon die if the population crisis is to be solved. AIDS is not an efficient killer because it is too slow. My favorite candidate for eliminating 90 percent of the world’s population is airborne Ebola (Ebola Reston), because it is both highly lethal and it kills in days, instead of years. “We’ve got airborne diseases with 90 percent mortality in humans. Killing humans. Think about that. “You know, the bird flu’s good, too. For everyone who survives, he will have to bury nine”.

Just because you don’t know you have cancer does not mean you do not have it. Simply because one is unaware of the depopulation quotes and intentions of the world’s most important leaders and institutions, does not mean that the plans are not being implemented to do such a thing. When so many influential leaders speak about the need to depopulate the world, we need to be paying attention to their actions for clues that the agenda is underway in order that we can best protect ourselves.

The depopulation agenda is being legitimized in print by various global think tank groups as a means to deindustrialize the planet in order to save the planet from the overuse of fossil fuels. Further, the depopulation agenda is being used as an excuse to protect planet’s inhabitants from a dwindling food source. This is one of the biggest lies being perpetrated upon the people. A growing population base is not causing the planet to run out of food. Here is a short video which exposes this deceptive agenda.

The Club of Rome, the Bilderberg and even the New York Times are all  advocating for extreme depopulation. The only remaining question is how far are the global elite willing to go to carry out their depopulation goals? In the 1970s, the Indian government forcibly sterilized millions of women against their will. Families in Bangladesh, Indonesia and elsewhere were forced to have fewer children. In 1974, the United Nations organized its first World Population Conference to debate population control. China rolled out its infamous one-child policy in 1980 and this policy was reflective of the founder of Planned Parenthood, Margaret Sanger when she said “The most merciful thing that a family does to one of its infant members is to kill it.”.

In the 1980′s, the population crisis seemed to be over. The replacement population rate needed to maintain a population is 2.1 children per woman and across the planet and that standard was basically maintained. However, there was one major exception and that was in the sub-Saharan Africa.

United Nations population experts and the world’s politicians convened what is now described as the first Agenda 21 conference, in 1994, in which an overt depopulation strategy was replaced by an agenda centered on empowering women through equal employment opportunities thus delaying childbirth and lessening the birth rate. Also, the UN and world leaders espoused increasing access to birth control and abortion, thus, killing unborn babies in fulfillment of Margaret Sanger’s expressed desire.

These early depopulation strategies are benign, even the scourge of abortion, when compared to more black project agendas that were conducted at the same time. The problem with using various birth control methods is that they are slow multi-generational processes and this lack of quick progress does not give the elite what they need and want which is to depopulate the world quickly.

For dramatic changes in population, a more radical agenda is needed. More deadly methods involving war and disease are preferable to members of the ruling elite who desire quick results, which are needed to save the planet from man-made climate change. This is what I submit is exactly what we are beginning to see.

During the same time frame, but buried behind the scenes, HIV and Ebola appeared in the same region of Africa for the first time and at the same time.  HIV swept across much of Africa decimating a large swath of the population. Some African communities had as many as 90% of the adults die from the disease in some villages and towns. Was this merely a coincidence with regard to the UN Agenda 21 population reduction policies being put into place at the same time? The answer to that question is debatable. However, we are looking at a significant number of depopulation coincidences to swallow at one time. There are still other coincidences which need to be brought out into the open.

Is it a coincidence that the first two Americans healthcare workers who have contracted Ebola are now inside the United States? Is it coincidence that the most deadly outbreak of the disease in history has admittedly now killed nearly 900 West Africans already this year and the number is beginning to climb exponentially? Is it just a mere coincidence that President Obama has just signed an executive order to have the power to begin rounding up American citizens with respiratory diseases against their will? Is it just a coincidence that the FEMA camp incarceration style roundups of the homeless are beginning in Los Angeles County as this could be easily be converted to Ebola quarantine centers? By the way, the homeless people are not allowed to leave these facilities once they are removed from the streets and “checked in”.

Perhaps the biggest coincidence has to do with the probability that Ebola is coming into America through the unprotected southern border. The prime suspects are an untold number of West Africans, estimated at 100,000 in Central America, streaming into the country as drug couriers. These West Africans are from the seven nation region in West Africa in which the live, uncontained Ebola outbreak is presently taking place. This fact , combined with the DHS/ICE policy of shipping the recent illegal immigrants to every corner of the country makes for a deadly cocktail which could culminate in a health crisis by Labor Day, given the fact that Ebola can incubate up to 21 days. Is this just another coincidence? If an Ebola outbreak does take hold in the United States, some like Dr. Pianka and Henry Kissinger will applaud the development as will the Club of Rome, the Bilderberg and event the New York Times.

Overpopulation is a Myth

The globalist notion that they must reduce population in order to save humanity, is a lie based upon unproven facts and should be considered to be nothing but a deception.

History clearly shows that if one would want to reduce population the best way to do so is through massive industrialization. Presently, the Italian birthrate is 1.4 and the in the United States, the indigenous birthrate is 1.8, which is far below the 2.1 standard needed to maintain a population. Both countries are symbolic of the fact that in industrialized societies, the birthrate declines dramatically because high numbers of children are not needed to work on farms. Any sociologist will tell you that birth control and industrialization go hand in hand. Therefore, the globalists should be trying to industrialize the third world instead of preventing progress and deindustrializing everyone else. Instead, their false paradigm of depopulation is based upon climate change caused by fossil fuels and overpopulation is a complete myth.

The globalists cannot industrialize the rest of the world because their main method for maintaining control over the planet’s resources would be in jeopardy. If most of the people on the planet were industrialized, they would not only experience a higher standard of living, but an increased desire for freedom of expression as the energy formerly spent on survival, would be focused on higher level needs. The globalists cannot allow humanity the opportunity to collectively reach a high level of enlightenment and awareness because there would be nowhere the elite could hide for their crimes against humanity.

It is my fear and reticent belief that we are living in the age in which the accelerated agenda of elite will culminate with a radical depopulation agenda consisting of Ebola attacks and World War III.  World War III? Yes, forces are mobilizing with regard to Ukraine. The world is in a very similar place as it was in Pre-World War I Europe.

Awareness and being outspoken are our best weapons needed to delay this agenda. Therefore, I would ask that you forward this article, to as many people as possible. Or, at least write your own version of this content and distribute it widely.

It strongly appears that phase one, depopulation through disease, as Dr. Pianka has advocated for, is underway. And World War III is one small trigger event from occurring. The latter will be the topic of a future article.