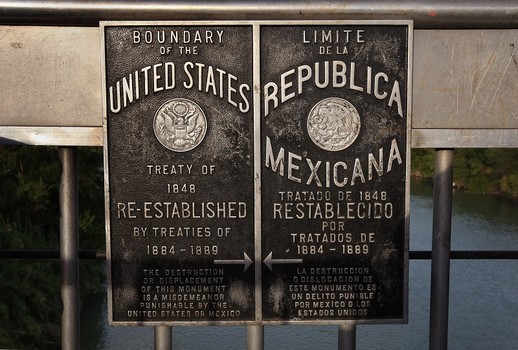 Right this very minute, next to the town of Killeen, Texas sits Fort Hood. There are two full army divisions there: The 2nd Armored Division and the 1st Cavalry Division (my old unit). Given the circumstances, why haven’t these two divisions been assigned to and deployed to our southern border?

The other day, an off duty border agent was murdered right in front of his wife and children by two illegal alien criminals, both of whom were deported several times before, but always found themselves back in the US. Because of Barack Hussein Obama’s direct policies, a father, husband and son was brutally ripped away from his family and it didn’t have to happen. Obama, in my opinion, is directly responsible and that young man’s blood is on his hands!

Don’t think that I’m letting Congress (both Houses) off the hook either, because I’m not!

It is painfully obvious, even to the most dimwitted, die-hard liberal that our country is under assault on our southern border. Contrary to what the liberal media is telling you, they are not all women and babies coming through. There is direct proof that there are Jihadist terrorists, drug dealers, violent psychopathic criminals and MS-13 gang members coming through also. This fact alone should alarm and terrify any sane person. These animals do not want to be American citizens. Their only thoughts are to rape, murder and rob you and me. The Muslims that are mixed in with them are here for only one thing: To destroy the United States of America.

This is one reason why the 2nd Amendment was put in the Constitution; the protection of our nation! It is an obligation of every American citizen to bear arms and protect his country. The federal government, from the President, to the Senate and the House of Representatives has utterly failed in their sworn duty to you and me. They left Washington without first securing the border. So when you go to town-hall meetings in the next five weeks, ask your elected official why they failed us. And don’t accept any answer that starts with “It was all because of Harry Reid and the Democrats…” That is not an acceptable answer. You don’t leave to go on vacation without locking-up the store before you go. No responsible adult can justify doing something so blatantly supid! That token bit of dramatic theater last week at the last minute was a shameful farce! They had no business leaving Washington until the border was secure. And yes, there is plenty of the blame game to go around!

Logically, it is now up to us, to do what our politicians have failed to do.

In my last article, I stated that every single politician who comes home during their break should be arrested for dereliction of duty and violation of their oath of office. That wasn’t rhetoric or angst, but the plain and simple truth! And it goes all the way up to and including the President!

This is not a joke, our lives, our property and the lives of all our loved ones are in mortal danger! Every single politician in our nation’s capitol have let us down and have put us in grave danger and exposed us to not just violence but the possibility of contracting diseases as well that were eradicated decades ago.

If you live on a border state….any border state, you have a duty as a citizen of that state to protect and defend it.

People who think this is all just the Democrats fault, don’t have a clue as to how the political system in this representative government works and are living in a fool’s paradise and give ALL Americans and Tea Party members, a “black eye” with their lack of involvement and apathy!

If your state doesn’t have a militia, then you should think about starting one, because if you’re waiting for the National Guard to come and rescue you, you might be waiting a long time, and by then it will be too late.

This link will help you find a militia in your state.

In my last few articles I have been very critical of both Democrats and Republicans, but I don’t want any of you to think that I wouldn’t or don’t fully support a Republican take-over of both houses of Congress in November. I am just so darn disgusted by both sides. In 2016, we would have to have a Republican president and both houses of Congress to even begin repairing the damage done by Obama and his minions. A stalemate is not an acceptable way to run this country. Our enemies are growing stronger by the minute while we argue among ourselves.