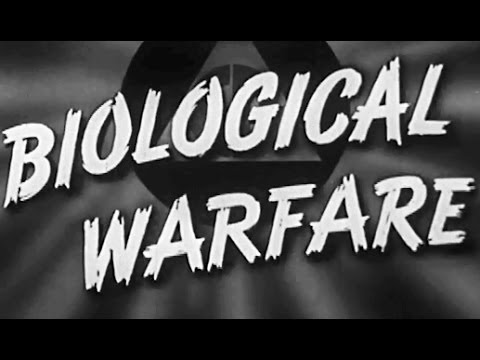 I continue to suspect that the Ebola outbreak in western Africa may have been the result of U.S. military biowarfare research gone awry.

As I previously reported:

The epicentre of the current Ebola epidemic is the Kenema Government Hospital in Sierra Leone. BeforeItIsNews claims the hospital houses a US a biosecurity level 2 bioweapons research lab. That claim is unconfirmed, however, this we do know.

Analysis of clinical samples from suspected Lassa fever cases in Sierra Leone showed that about two-thirds of the patients had been exposed to other emerging diseases, and nearly nine percent tested positive for Ebola virus. The findings, published in this month’s edition of Emerging Infectious Diseases, demonstrates that Ebola virus has been circulating in the region since at least 2006—well before the current outbreak, reports Global BioDefense.

According to GBD, the U.S. Army Medical Research Institute of Infectious Diseases has been operating in the area since 2006, supposedly working on “diagnostic tests.”Author Randal J. Schoepp, PH. D. reports that because the USAMRIID team just happened to be working on disease identification and diagnostics in the area, they had pre-positioned assays in the region to address the ebola outbreak:

We had people on hand who were already evaluating samples and volunteered to start testing right away when the current Ebola outbreak started.

Metabiota Inc., a non-government organization (NGO) is also involved in the testing. It lists among its partners, the Department of State, Biological Engagement Program and the Department of Defense, Defense Threat Reduction Agency. Advisors to the NGO include Admiral Gary Roughead, former US Chief of Naval Operations.

In an August 1 story, the Army Times informed:

Filoviruses like Ebola have been of interest to the Pentagon since the late 1970s, mainly because Ebola and its fellow viruses have high mortality rates — in the current outbreak, roughly 60 percent to 72 percent of those who have contracted the disease have died — and its stable nature in aerosol make it attractive as a potential biological weapon.

Since the late 1970s and early 1980s, researchers at the U.S. Army Medical Research Institute of Infectious Diseases have sought to develop a vaccine or treatment for the disease.

Last year, USAMRIID scientists used a treatment, MB-003, on primates infected with Ebola after they became symptomatic; the treatment fully protected the animals when given one hour after exposure.

Two-thirds of infected primates were protected when treated 48 hours after exposure, according to a report published last August in Science Translational Medicine.

As I reported earlier, MB-003 appears to be part of the “secret serum” treatment being administered to the two Americans that are now in the U.S. and who contracted Ebola.

Friday in a television interview on Defense News with Vago Muradian, Assistant Secretary of Defense for Health Affairs Dr. Jonathan Woodson said, ”One of the things I don’t think many people realize is what a huge valuable asset the military health system is to this nation.”

“Not only are we a key enabler so that service members, men and women who … go in harm’s way will be taken care of, but we are a public health system, an education system, a research and development system.”

“The recent development with infectious disease issues in Africa — they are turning to the U.S. military to provide expertise.”

The Defense Department earlier this week issued a statement, which said:

A small group of military and civilian personnel assigned to the U.S. Army Medical Research Institute of Infectious Diseases, or USAMRIID, is in Liberia as part of a larger U.S. interagency response to the world’s worst outbreak of the Ebola virus which continues to spread in West Africa, a Defense Department spokesman said today.

Army Col. Steve Warren told reporters that personnel assigned to USAMRIID have established diagnostic laboratories in Liberia and Sierra Leone, two of three countries where the outbreak has been spreading in recent months.

“We also evaluate and develop diagnostic instruments and technologies for use in forward field medical laboratories and with the Joint Biological Agent Identification and Detection System, called JBAIDS, the diagnostics platform used across the DoD,” the statement added.

It’s really not a big jump to suspect that the military has also been doing research on Ebola as a bioweapon. As the Army Times notes about Ebola, “its stable nature in aerosol make it attractive as a potential biological weapon.” What better place, via the eyes of the U.S. military, to be messing around with such research than Africa? The thinking might go: If there is a misstep with the virus, research blowbacks don’t happen around US civilian populations.

It appears that some locals in eastern eastern Sierra Leone may  have just such suspicions.

Specifically, they appear to be very suspicious of the “help” US personnel want to provide Ebola victims. Some of this suspicion may be the result of a failure by the locals to appreciate the techniques of modern medicine, but some may also be the result of whispers and rumors from locals who may have been low level workers close to US military research before the outbreak blew up.

Mainstream US media is now claiming that rumors about the early lab work at the Kenema hospital, where US military research may have been going on, were being spread by a “mentally ill former nurse.”

According to Bloomberg, the nurse is now in custody. Bloomberg also said that the nurse charged that health workers were using Ebola as a ruse to kill people and collect body parts. Whatever the nurse was really saying, the locals are certainly not happy with the research and the hospital.

Residents of Kenema in eastern Sierra Leone threw stones at the hospital and a police station, reports Bloomberg.

There is no smoking gun here, but one can certainly draw dots around the facts that suggest the U.S. military was the bad actor in this Ebola breakout.

Another dot to connect is that the US Gunverment holds a patent on Ebola:http://www.google.com/patents/US20120251502

PATENTHuman Ebola Virus Species and Compositions and Methods ThereofUS 20120251502 A1ABSTRACTCompositions and methods including and related to the Ebola Bundibugyo virus (EboBun) are provided. Compositions are provided that are operable as immunogens to elicit and immune response or protection from EboBun challenge in a subject such as a primate. Inventive methods are directed to detection and treatment of EboBun infection.

Robert Wenzel is Editor & Publisher of EconomicPolicyJournal.com and author of The Fed Flunks: My Speech at the New York Federal Reserve Bank..