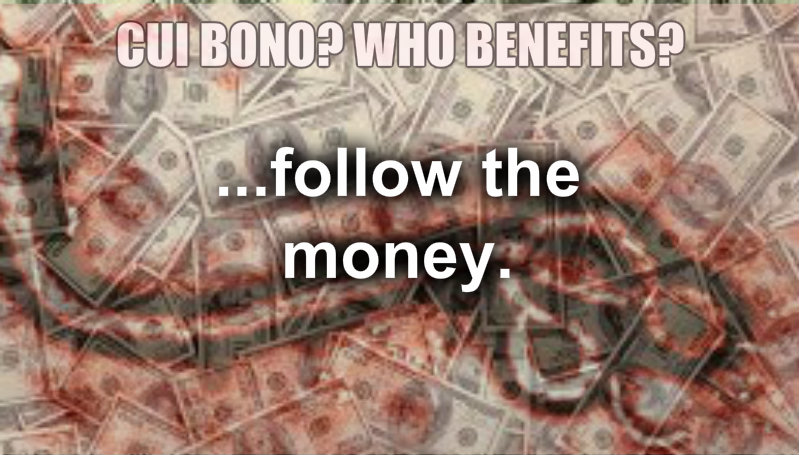 We have all been watching the unfolding story of Ebola and how it is creating concern on a global scale. What if it were merely an attempt to push a new drug to generate millions of dollars for the global elite and the medical industrial complex? What if I told you 122,000 people died from measles in 2012 without so much as a whimper from either the alternative media or the mainstream media?

A few days ago one of the people that I work with asked me what was going on with Ebola, as he knows that I operate The Daily Coin, and am a daily contributor at SGT Report. When I explained that we were following, at that time, the latest story of Ebola coming to America, he stopped me and gave me the government’s typical, tyrannical game-plan – problem, reaction, solution. Let’s look at the Ebola “pandemic” from a different perspective.

The cost of measles injections, according to Centers for Disease Control and Prevention, ranges from $19.91 for 10 individual doses to $103.16 for 10 individual doses. The lesser of the two is strictly for measles, and the more costly is for the cocktail version to immunize against measles, mumps, and rubella. At an average cost of $61.54 per dose, and with 145 million doses administered in 2012, we are not talking about a small profit. That is a staggering amount of money.

According to WHO, measles is a bigger problem with virtually the same forms of transmission. The biggest difference – measles are a lot more prevalent, just not in the US, due to vaccinations. Not only are vaccinations a solution, they generate millions of dollars for the medical industrial complex.

The highly contagious virus is spread by coughing and sneezing, close personal contact or direct contact with infected nasal or throat secretions.

With so much death and destruction related to measles you would think the world would be in the same type of hysteria as we are regarding Ebola. It should garner some news coverage on a large scale – not a peep. Don’t get me wrong, I recently conducted an interview with leading survivalist, prepper, and author, Tess Pennington, about how to be better prepared for an outbreak of Ebola in America. I am as concerned as everyone else. Let’s remove some of the emotion (reaction) and look at what it is happening in a different light.

The current Ebola outbreak began in March 2014. Only within the past few weeks has the news really taken hold and has spread like wild-fire across the globe. Why is this happening now, and why the delay regarding an “outbreak” of a highly contagious disease?

Once again, I am just as concerned as everyone else. My family is prepared for this situation – maybe not as well as we should be, but we have made some serious moves, just in case. The news keeps escalating, but the spread of the disease is not growing nearly as fast as the news stories. On August 6, 2014, Zerohedge reported:

The official Ebola death toll is now at 932 with over 1,700 reported cases but as the WHO reports, in the last 48 hours, deaths and cases have exploded (48 and 108 respectively). As the charts below show, this epidemic is going exponential. What is perhaps most worrisome is, while playing down the threat in Nigeria (most especially Lagos – which the CDC Director is “deeply concerned” about), officials have formally asked the US for the experimental Ebola drug, which suggest things are far worse than the 3 deaths reported so far in Nigeria would suggest. Finally, as we warned yesterday, Saudi Arabia is suffering too as the main who was hospitalized yesterday with symptoms has died – the first reported casualty in the Arab world.

This is a far cry from 14 deaths an hour for an entire year!! So, here we are: everyone – and I mean everyone – is talking about Ebola, the tragedy, the absolute fear of it becoming a pandemic, and everyone is scrambling to cover every nuance of this situation. PROBLEM!!! Everyone is currently whipped into a fear-based state of mind. REACTION!!! Here comes the almost miraculous, NEW, unproven vaccine. SOLUTION!!! Hooray, we are all saved! All we have to do is DEMAND this new wonder drug, and all will be fine.

There have been a few articles that popped up in the past two days regarding the new wonder drug that has been “under development” for the past few years, and now it has a reason for being!! WOW! Whoda thought a new drug for a highly contagious, easily spread disease that gets started in a “third world” country, would be needed – by the ENTIRE GLOBE!!

So, who owns this very timely, necessary wonder drug? It wouldn’t be the US government and one of it’s crony companies would it? Nah, couldn’t be; too simple. Well, according to CNN, Mapp Pharmaceutical, a San Diego based company, just happens to have a military contract, through the National Institutes of Health, to develop an Ebola serum.

Tekmira, a Canadian based pharmaceutical company, “was to begin Phase 1 trials with its drug in January. But the FDA recently halted the trial, asking for more information“. [Source] And the winner is? Mapp Pharmaceuticals, a US based company, not some “foreign” company.

We have identified the problem – a highly contagious disease that everyone is aware is spreading. If we weren’t supposed to know (just like in March when it began,) we would not know about it. We have identified the reaction – fear based, emotionally charged news stories on a global scale. The solution? DEMAND a vaccine.

I may be wrong, but it appears, especially in light of what I have learned about measles and the fact that measles are just as deadly, just as contagious, and spread just as easily, the Ebola outbreak may be a new business model. If you think that getting super rich off this pandemic is not the one of the end results for these dirtbags, then you are just not cynical enough. ZMapp is owned by MappPharmceuticals, and works in partnership with LeafBio. Neither company is as public as their masters– maybe they could be one of the true giant pharma companies that created these two companies as “farm teams,” to distance themselves from any liabilities, but retain all the profits. Too cynical? Not in today’s world. Be sure and do your own research. If you become wealthy – just like the global elite will be getting wealthy – good for you. Just remember to send me a coin or two.

Rory has been married for five years and is a contributor to SGTReport.com. He has interviewed some of the top precious metals professionals in the industry, as well as top preparedness specialists in the world. His YouTube Channel, The Daily Coin, was launched in 2014. He is a student of monetary, financial and economic history and has built and maintained Rory’s Glass (Eyes of the Heart Glassworks).