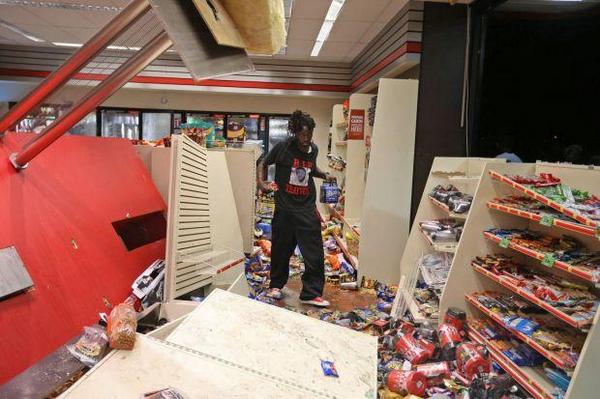 One of the looters who stole goods from a QuikTrip store during riots in Ferguson, Missouri last night was pictured wearing an “RIP Trayvon” shirt.

32 people were arrested last night after chaotic scenes sparked by the shooting of 18-year-old Michael Brown, who was gunned down after an altercation with police on Saturday night despite being unarmed.

Numerous stores were looted, one was set ablaze and rioters fired guns at officers during disorder that stretched into the early hours of the morning. Mobs gathered to chant “kill the police” as authorities were forced to dismiss rumors that the National Guard was to be brought in.

An image of one of the looters wearing a Trayvon shirt serves as a reminder that the verdict in the George Zimmerman trial, which sparked a heated race debate across America, was followed by acts of looting and violence in several different areas of the country.

After the store was looted it was set ablaze.

As the sun rises on #Ferguson, the riot damage is revealed. http://t.co/8Mfqt69WNQ pic.twitter.com/rwYmwk53Gt

The family of Michael Brown responded to the unrest by saying they were “absolutely furious” and that the looting only served to disrespect the memory of their deceased son.

However, some local residents defended the disorder, asserting it was a legitimate form of protest.

“This is exactly what is supposed to be happening when an injustice is happening in your community,” DeAndre Smith told the St. Louis Post-DIspatch, adding: “You have kids getting killed for nothing.”

Many have questioned why the residents of Ferguson felt the need to loot local businesses owned and run by people in their own community, asking why rioters chose to storm the sporting goods store rather than the police station.

Smith warned that the rioting was not over, hinting that more unrest was to come.

“I don’t think it’s over honestly,” he said. “I just think they got a taste of what fighting back means.”