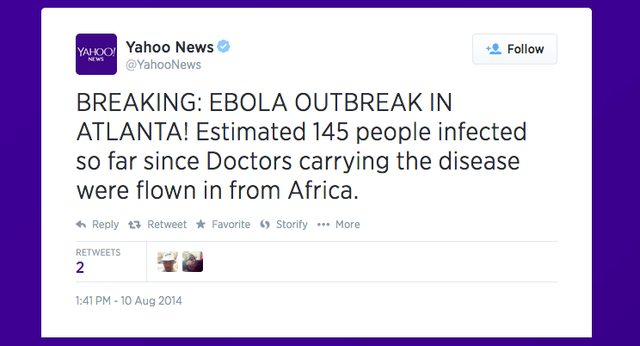 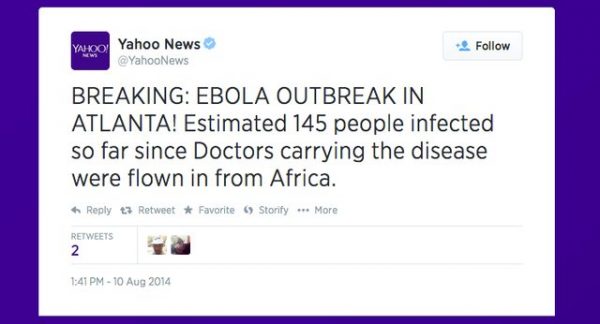 A Yahoo News tweet went out at 4:41 p.m. (Eastern) Sunday and it stated that 145 people in the Atlanta area have contracted Ebola. The Yahoo News tweet disappeared about 20 minutes later, only to be replaced by a tweet stating that the first tweet was a mistake . However, the Yahoo News Twitter release was retweeted hundreds of times in those 20 minutes.

The tweet was captured and was replayed on Before Its News.

Do not make the mistake of believing any of this. There is absolutely no truth to the claim that 145 people, in Atlanta, have contracted Ebola. Many are asking ifi Yahoo News actually ran the tweet, or were they hacked? Yahoo News did indeed run this tweet, but they knew exactly what they were doing.

The Goals of Yahoo News and Their Infamous Tweet

Yahoo News had two goals in regard to tweeting this false information on their twitter account, only to take it back 20 minutes later. First, we live in a culture of fear. Government exists because of fear. Television news ratings rise when they report fearful news. We have become a nation of self-directed fear mongers. This is precisely what Yahoo News is counting on.  Their false tweet was designed to make as many people in the public fearful, of an Ebola outbreak, as possible.

Do you remember when you would play a game, as a child, by saying something outrageous and then telling the person “made you look”? This is exactly what Yahoo News was doing when they tweeted this false claim of 145 people contracting Ebola in Atlanta. They made us look. They made us fearful. Of course, Yahoo News attempted to maintain their credibility by withdrawing the tweet 20 minutes later, but it is impossible to unring the bell and Yahoo knows this.

Why would Yahoo News want to “make us look”? There are two reasons. First, Monsanto and their bad reputation must be distanced from any vaccine. This will be explained in  more detail later in the article. Second, the tweet was designed to evoke a fear reaction from the public and this would hopefully serve to move the public closer to accepting a hastily prepared vaccine of questionable value. If the public can be put in a state of fear, when the so-called “vaccine” for Ebola is ready, the fearful American people will be conditioned that they better take the vaccine with no questions asked.

How can I be certain that Yahoo News’ goal of being a fear mongering, agenda promoting media outlet designed to condition the public to be fearful of Ebola?

On August 4th, I wrote these words “Monsanto, or Monsatan as many call them, has partnered with the Department of Defense to use a proxy third party company to develop a vaccine against Ebola. The seed money began at $1.5 million. The value of the deal could grow to an estimated $86 million dollars. The company’s name is Tekmira Pharmaceuticals Corporation (TKMR) (TKM.TO), a leading developer of RNA interference (RNAi) therapeutics. “TKM-Ebola, an anti-Ebola virus RNA therapeutic, is being developed under a $140 million contract with the U.S. Department of Defense’s Medical Countermeasure Systems BioDefense Therapeutics (MCS-BDTX) Joint Product Management Office”.  As breaking and shocking of a news story as this has the potential to be, the real story is that this is not the most important part of the Ebola threat which has invaded the United States…” In part, I based my conclusions based upon Yahoo’s July 21st account of the involvement  of Tekmira which was easily traceable to Monsanto.

On July 21, 2014 Yahoo reported “TKM-Ebola, an anti-Ebola virus RNAi therapeutic, is being developed under a $140 million contract with the U.S. Department of Defense’s Medical Countermeasure Systems BioDefense Therapeutics (MCS-BDTX) Joint Product Management Office. Earlier preclinical studies were published in the medical journal The Lancet and demonstrated that when siRNA targeting the Ebola virus and delivered by Tekmira’s LNP technology were used to treat previously infected non-human primates, the result was 100 percent protection from an otherwise lethal dose of Zaire Ebola virus (Geisbert et al., The Lancet, Vol 375, May 29, 2010). In March 2014, Tekmira was granted a Fast Track designation from the U.S. Food and Drug Administration for the development of TKM-Ebola.”

Tekmira is now controlled by Monsanto and Yahoo News is trying to take attention away from this fact. Why? Many in the public are aware of Monsanto’s very suspect reputation in regard to the GMO controversy and Monsanto’s relentless pursuit of forcing American and Canadian farmers to use their Roundup product on their farms by hook or by crook. The mere use of the name “Monsanto” causes many to recoil in disgust. If you are with the CDC and you want to peddle a vaccine, you do not want the public to mistrust the manufacturer of the vaccine. This is why Monsanto is using Tekimira’s name to develop an Ebola vaccine. It is apparent that they are trying to hide their direct involvement. When this association between Tekmira and Monsanto was exposed a week ago, a cover-up was put into motion which was designed to obscure Monsanto’s involvement in the upcoming Ebola vaccine release. Hence, the reason for the “mistaken” tweet by Yahoo.  This was a redirect away from Monsanto and was also designed to promote an atmosphere of fear in the public.

There is even more proof of the plot to move attention away from Monsanto.  Within the past 24 hours, ABC News announced that “Clinical trials of a preventative vaccine for the Ebola virus made by British pharma company GlaxoSmithKline may begin next month and made available by 2015, the World Health Organization said on Saturday.

A clinical trial of an experimental vaccine against the deadly Ebola virus, which has killed nearly 1,000 people in West Africa, is expected to begin soon.

British drug maker GlaxoSmithKline (GSK) is co-developing the vaccine with US scientists which is said to have produced promising results in animal studies involving primates.”

(EDITOR’S NOTE: NOTICE HOW ABC NEWS SAID THAT GSK IS “CO-DEVELOPING THE VACCINE? YET, THERE IS NO MENTION OF MONSANTO AND ITS PROXY CORPORATION TEKMIRA AS THE “OTHER CO-DEVELOPER”.  THIS IS THE SAME STRATEGY, OF REDIRECTION AWAY FROM MONSANTO AND ALSO PROMOTES THE NOTION THAT A HASTILY PRODUCED VACCINE “SHOWS PROMISE” BECAUSE THE ELITE WANTS YOU TAKING THEIR VACCINE).

Military Involvement in the Development of the Vaccine

There is a third element to this story as this quote from a smoking gun document demonstrates that not only is Monsanto and GSK are in control of rolling out the vaccine, there are elements in the military involved in this plot as well. “This work is being conducted under contract with the U.S. Department of Defense Joint Project Manager Medical Countermeasure Systems (JPM-MCS). JPM-MCS, a component of the Joint Program Executive Office for Chemical and Biological Defense, aims to provide U.S. military forces and the nation with safe, effective, and innovative medical solutions to counter chemical, biological, radiological, and nuclear threats. JPM-MCS facilitates the advanced development and acquisition of medical countermeasures and systems to enhance biodefense response capability. For more information, visit www.jpeocbd.osd.mil“.

On July 21, 2014, Yahoo News reported on Tekmira’s work on an Ebola vaccine. The alternative media immediately traced this development to Monsanto thus exposing Monsanto’s involvement in the creation of a new Ebola vaccine. Yesterday’s Yahoo tweet was a classic misdirection away from attention on Monsanto, followed by the ABC story linking the vaccine development to GSK and the entire scenario was twisted into a fear mongering report of 145 people contracting Ebola in Atlanta by the Yahoo News tweet.

I believe, as it was rehearsed in the H1N1 scare from five years ago, this vaccine will be mandatory and the propaganda machine is already pursuing this objective. The H1N1 vaccine was filled with deadly central nervous system adjuvants that was forced upon members of the military and hospital personnel across the country. There is good reason to believe that history is going to repeat itself. If the public wants to turn this plot back, we need to publicly and continually associate Monsanto with the vaccine effort, not GSK or the DOD.  Monsanto GMO’s=Ebola vaccine. Monsanto’s reputation will do the rest.

In the upcoming months, I am certain that we will see more operational details emerge about the roll out of the vaccine. However, the best predictor of the future is the past and I recounted in the August 4th article, some specific elements of what was practiced by Colorado law enforcement during the H1N1 scare.  You may wish to review my August 4th article in an effort to become hyper-vigilant to what is coming. I believe the hastily prepared vaccine will be much more dangerous than the possibility of a widespread outbreak of Ebola.