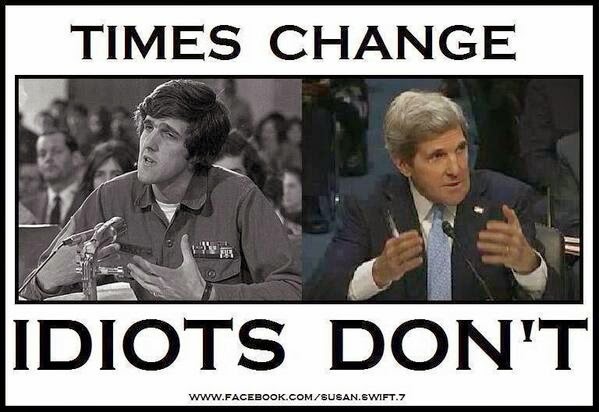 Before I start ripping John Kerry a new backside, here is some background information on this elitist piece of garbage.

“John Forbes Kerry (born December 11, 1943) is an American politician who is the 68th and current United States Secretary of State. He has served in the United States Senate, and was chairman of the Senate Foreign Relations Committee. Kerry was the candidate of the Democratic Party in the 2004 presidential election but lost to George W. Bush. Kerry was born in Aurora, Colorado and attended boarding school in Massachusetts and New Hampshire. He graduated from Yale University class of 1966 with a political science major, and was a member of theSkull and Bones secret society. Kerry enlisted in the Naval Reserve in 1966, and during 1968–1969 served an abbreviated four-month tour of duty in South Vietnam as officer-in-charge (OIC) of a Swift Boat. For that service, he was awarded combat medals that include the Silver Star, Bronze Star, and three Purple Hearts. Securing an early return to the United States, Kerry joined the Vietnam Veterans Against the War in which he served as a nationally recognized spokesman and as an outspoken opponent of the Vietnam War. He appeared before the Senate Committee on Foreign Affairs where he deemed United States war policy in Vietnam to be the cause of “war crimes.”

After receiving his J.D. from Boston College Law School, Kerry worked as an Assistant District Attorney. He served as Lieutenant Governor of Massachusetts under Michael Dukakis from 1983 to 1985. He won the Democratic primary in 1984 for the U.S. Senate and was sworn in the following January. On the Senate Foreign Relations Committee, he led a series of hearings from 1987 to 1989 which were a precursor to the Iran–Contra affair. Kerry was reelected to additional terms in 1990, 1996, 2002, and 2008. In 2002, Kerry voted to authorize the President “to use force, if necessary, to disarm Saddam Hussein”, but warned that the administration should exhaust its diplomatic avenues before launching war. In his 2004 presidential campaign, Kerry criticized George W. Bush for the Iraq War. He and his running mate Senator John Edwards lost the race, finishing 35 electoral votes behind Bush-Cheney. Subsequently, he established the Keeping America’s Promise PAC. Kerry became chairman of the Senate Foreign Relations Committee in 2009. Having been nominated by President Barack Obama to succeed outgoing Secretary of State Hillary Rodham Clinton and then confirmed by the U.S. Senate by a vote of 94–3 on January 29, 2013, Kerry assumed the office on February 1, 2013.

My goodness gracious, doesn’t he sound just like a “regular kind of fellow”? Just your average all-American “boy next door.” Here is Kerry appearing before the Senate Committee on Foreign Affairs where he deemed United States war policy in Vietnam to be the cause of “war crimes” and accused his fellow service members as rapists, murderers and criminals.

On April 22, 1971, Kerry became the first Vietnam veteran to testify before Congress about the war, when he appeared before a Senate committee hearing on proposals relating to ending the war. He was still a member of the United States Navy Reserve, holding the rank of Lieutenant Junior Grade. Wearing green fatigues and service ribbons, he spoke for nearly two hours with the Senate Foreign Relations Committee in what has been named the Fulbright Hearings, after the Chairman of the proceedings, Senator J. W. Fulbright. Kerry began with a prepared speech, in which he presented the conclusions of the Winter Soldier Investigation, and then went on to address larger policy issues.

A “loyal” member of the Armed forces, right? I wonder, just how did Kerry manage to win all his medals he is so proud of in just 4 months? I know ex-soldiers who are ten times the man he is and they never even got so much as a Good Conduct Medal. His fellow Swift Boat service members, from what I’ve heard, had quite a different story to tell and exposed him when he made his bid for the presidency in 2004. Unfortunately for Kerry, certain people, especially veterans, have a long memory when somebody accuses them of the kinds of horrible things that John Kerry did. He thought that nobody would remember just what kind of cheesy rat he was.

You can read about what they have to say about Kerry here.

Now Kerry is out on the world stage as our Secretary of State, making an utter ass of not only himself, but he is embarrassing the American People as well. Here is another elitist piece of human offal, who has never had to struggle, has never had to worry about money, who has never gone hungry. Kerry almost makes Joe Biden seem smart. I guess that money really does talk, especially when it comes to a career in Washington D.C.

Kerry also married well before he became Secretary of State. He was the second richest member of Congress. Kerry’s minimum net worth: $198.65 million. He has been a mainstay on Roll Call’s list of the wealthiest in Congress for more than 15 years, due in large part to the assets of his wife, Teresa Heinz Kerry, the widow of Sen. H. John Heinz III (R) of Pennsylvania of the Heinz ketchup fortune. Though Kerry’s reported minimum net worth of $198.65 million is more than $100 million short of what he’d need to nab the top spot, the actual value of his fortune is likely far more than what is reported each year. Senator Diane Feinstein’s minimum net worth is $41.78 million.

It seems to this un-paid contributor, that politics is a lucrative “business.” So, what we have here in the persona of John Kerry is, just another obscenely rich, elitist scumbag who is so far out of touch with regular Americans, it isn’t funny.

As much as I hate “Hanoi Jane” Fonda for what she did during the Vietnam War, I hate Kerry more. They’re both traitorous scumbags of the first order. Will somebody please tell me just why is it that we keep putting this kind of garbage in public office?

He fits right in with Obama’s administration.