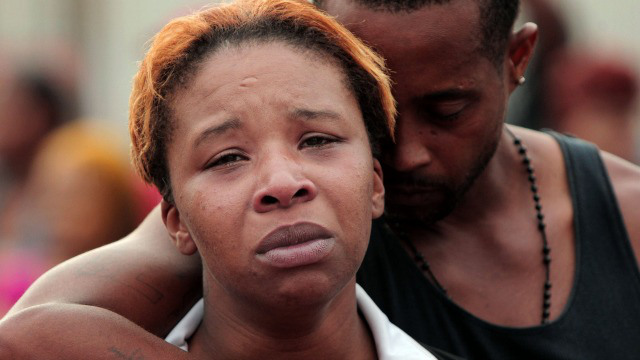 As the 2nd night of riots happened in Ferguson, Missouri (at St. Louis suburb) a few of the pieces are starting to fall into place as to what actually may have happened. The account of the unnamed officer and the witnesses are contradictory, but they do establish some basic facts that we might now presume are fact.

The officer recounts a struggle for his gun, in which one round was fired in his squad car. After this struggle, 18-year-old Michael Brown allegedly fled and was shot.

— Multiple eyewitness accounts say that Brown was killed while attempting to surrender.

— Brown’s friend Dorian Johnson, who was with Brown at the time, says that the two of them were walking in the middle of the street when a police car approached, and the officer told them to get on the sidewalk.

— Eyewitness Piaget Crenshaw says that Johnson, Brown and the officer got into a verbal confrontation, and the officer attempted to put Brown in the police car. When Brown began to flee, with his hands in the air, she says, the officer got out of the car and started shooting at Brown. (Crenshaw has photos of the shooting, which have been turned over to the police.)

—Another eyewitness told the press that the officer was in his car when he started shooting at the boys. (At least one shot was fired from the police car.)

— Johnson says that he and Brown started running when they heard the first shot. He told local news station KMOV that the officer “shot again, and once my friend felt that shot, he turned around and put his hands in the air. He started to get down and the officer still approached with his weapon drawn and fired several more shots.”

It seems clear that Brown fled and possibly surrendered, no matter which account is most factual. In fact St. Louis County Police Chief Jon Belmar did confirm that Mike was shot at least 35 feet away from police vehicles.

It would seem to reason that an unarmed suspect that is at least 35 feet from the police car, and either fleeing or surrendering, is no longer an immediate threat.

This brings about the question of excessive force. At this point did the officer have the right to shoot to kill or would the primary objective be to disable and apprehend this suspect and bring him to justice?

I think this is a very important question to answer and may ultimately give us some keen insight into the minds of SOME of those who are hired to “serve and protect.”

With reports of the suspect being struck by as many as 8 bullets, it would certainly be questionable which objective the officer had in mind.

In an editor’s update that I posted to one of our articles yesterday, I wrote and cited two sources:

A woman who says she witnessed the shooting of Michael Brown by a Ferguson, Mo., police officer said the 18-year-old had his hands up when he was killed.

The witness said Brown, 18, had turned around and was facing police with his hands in the air when the officer fired. She said a stray bullet from the police officer’s gun hit a neighbor’s home, and she was surprised no one else was injured.

“I saw him turn around with his arms up in the air and they shot him in his face and chest and he went down unarmed,” Piaget Crenshaw said.

The one part of the story that seems to be consistent is that Brown was shot as he was either fleeing or had surrendered some 35 feet away. In either case it seems that there was no further danger as he was unarmed. Bearing this in mind, Brown’s mother says that he was shot 8 times. Fox 6 reports:

McSpadden was told her son was shot eight times, though witnesses had varying accounts of how many shots were fired. Brown was supposed to start classes at Vatterott College on Monday, she said.

McSpadden had pointed words for the officer who shot her son.

“You’re not God. You don’t decide when you’re going to take somebody from here,” McSpadden said.

Vox.com seems to have established that Brown was struck by at least three bullets:

— On Sunday, Belmar told reporters that Brown was shot “more than just a couple [times], but I don’t think it was many more than that.”

Belmar is Jon Belmar, Chief of the St. Louis County Police. So he has admitted that the suspect was shot “more than just a couple” of times. That means that the Chief believes that Brown was shot at least 3 times.

Johnson was the young man that was with Brown during the incident.

If we find out that Brown’s mother is correct and that he was shot as many as 8 times it is an entirely different story it would seem.

Ultimately the courts will (hopefully) decide what was warranted but I’d like to see what our readers think, and especially those who might have law enforcement experience.

Even if the suspect was attempting to flee, was there any justification for putting at least 3 bullets in him?