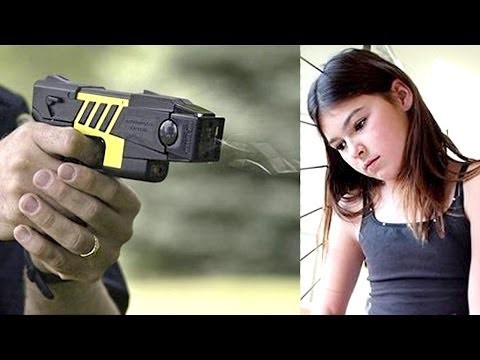 The force of the electricity shot through her body, lifted her, and threw her against a wall.”

A Native American Woman in South Dakota is suing her local police department and a number of individual officers, after a taser was used on her 8-year-old girl.  According to the lawsuit, the young girl had a paring knife that her babysitter could not take from her, so the babysitter called the police with the hope that they would help her get the knife from the child without hurting her.

However, as with many cases that we have seen across the world, the police actually made the situation worse when they arrived.  When police arrived on the scene they made the decision to subdue the girl using a taser.

According to the lawsuit, “the force of the electricity shot through her body, lifted her, and threw her against a wall. After the officers had stunned (the girl) into high voltage submission, they pulled the fish-hook like Taser darts from her chest, gave her emergency medical attention, bandaged the holes left by the razor-sharp hooks, and called the ambulance.”

Dawn Stenstrom, the girl’s mother, was horrified, and soon after the incident the entire family moved away from the town and returned to the Rosebud Sioux tribe reservation.

She is now seeking damages from the city of Pierre, South Dakota, its former police chief, Robert Grandpre, and the four officers at the scene on October 4, 2013, when the incident occurred.  She believes that excessive force was used on her daughter, and that there was no reason to use such a weapon on an 8-year-old girl.  The police department says that their officers were following procedure, and the police chief claims that the officer who tased the girl could have saved her life.

“Given the circumstances facing the officer at the time, it appears from the report that deploying a Taser was the best viable way to defuse the situation,” Wendy Kloeppner, the Hughes County state’s attorney, said in a statement after an internal investigation conducted by government agents.  It was said that this was an independent investigation, but it was still carried out by people who were on the state’s payroll.

Stenstrom’s attorney, Dana Hanna, told CNN that the police acted inappropriately, and suggested that the investigation was a whitewash.

“One distracts her, another grabs the girl’s arm. That’s what they should have done,” Hanna said. “She had a kitchen paring knife, but hadn’t cut. She was a kid throwing a tantrum. They should have made an attempt to grab the kid, not use a weapon to throw her into a wall. A Taser’s not meant to kill, but it does kill. Many people have died after being hit by a Taser by cops. It never should be used on a little child. She certainly wasn’t presenting a danger to officers.”

“What is it really going to honestly do for the rest of her life as she has to interact with authority figures and law enforcement?” Duffy said. “What’s it going to be like first time she looks in the rear view mirror and law enforcement gives her a speeding ticket? She won’t shake that,” he added.

Our nation’s security is at risk due to Biden’s illegal military...