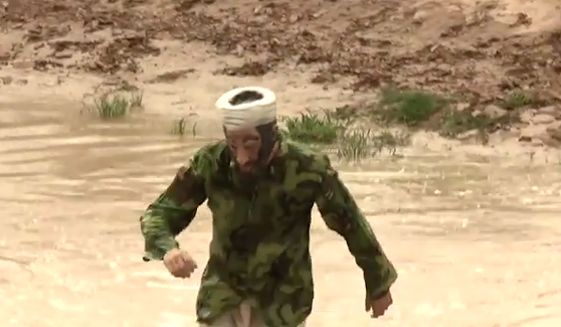 James O’Keefe of Project Veritas has been on the cutting edge of exposing government corruption. Along with Hannah Giles, O’Keefe brought down ACORN and now has now released a stunning video in which he crossed the Texas/Mexico border dressed as Osama bin Laden only to discover there was no one there to stop him.

O’Keefe prefaced his video and report in a post on Thursday saying, “There will be no Pulitzer, Peabody or Emmy awards after we release our story on Monday. They reserve those types awards for media who sit back and accept the government line at face value. We don’t. We seek out the truth. And we guarantee that our report on Monday will embarrass the government spokesmen and political leaders who want you to quietly accept that there’s no illegal immigration crisis, that the border is secure and that America is safe.”

He went on to tout, “By now, you’ve heard of the tens of thousands of children fleeing from Central America. You may have even seen the media debating why the Border Patrol has stopped multiple Congressmen from viewing the border facilities that hold these children. After watching this story closely and hearing from law enforcement officials and American ranchers about what’s really happening on the border, we knew we had to investigate. I went to Texas this week to work with our investigative journalists who were already looking into the border crisis. I wanted to see for myself, so we went to the border to get a closer look. Let’s just say that we got a much closer look than we had planned. What we discovered will shock and outrage you.”

Well, see if you are outraged America. Take a look at this revelation:

Donning a camouflage military style jacket, a dishdasha and an Osama bin Laden mask, O’Keefe was filmed crossing the Rio Grande unimpeded in less than a minute.

“I see no border patrol. I see no security,” he said before he put on his disguise.

His investigation occurred in Hudspeth County, Texas where there is evidence of previous crossings by illegal immigrants and drug smugglers. As O’Keefe’s team discovered, that evidence consisted of footprints, worn paths, campsites and trash.

“Thousands of people have stood in my footsteps right now,” he said. “They’ve come from South America, Honduras, Guatemala, and they’ve all crossed the border. And if they can cross, anybody can cross.”

“If the President or Senator Reid or anyone else tries to tell you that our borders are secure, they are lying to you,” he said.

“Border security is national security,” he added. “We were able to pick a well-traveled crossing, easily accessible from both sides, and cross unobserved by federal agents. Just six miles from our crossing is Interstate 10, and from there, the rest of the country. Do you feel safe?”

O’Keefe merely confirms what we have all known and that is there is no security at the Southern Border and there won’t be unless it is provided by militia groups, such as those that advanced towards Texas and set up a command center when the news broke about a flood of illegals over the border in June.

Of course, the media only focuses on children, who make up roughly 10% of those crossing the border. It doesn’t speak about the thousands of drug smugglers, gang members and diseased individuals coming into the population in the United States and then cared for by tax dollars. It also fails to mention the jihadists who have crossed our borders and are here among us. Further, instead of providing the truth about this situation and acting on information given to it by a whistleblower, our federal government sent assault teams to raid the whistleblower. And that situation happened under the previous George W. Bush administration.

It is clear that this administration is not concerned about border security. But wait, it isn’t just the administrations, it’s congress too. As you currently enter O’Keefe’s site, there is a poll that asks, “Who caused this mess?” The answers are listed as three:

If you are like me, you are saying “All of the above,” an answer that was not provided. I think we need to forward this video to every elected official to expose them and demonstrate that we know they are doing nothing about the issue and that if necessary we will be those that not only hold them accountable, but also, we will be willing to support efforts to enforce the law ourselves if need be under the authority of the states.