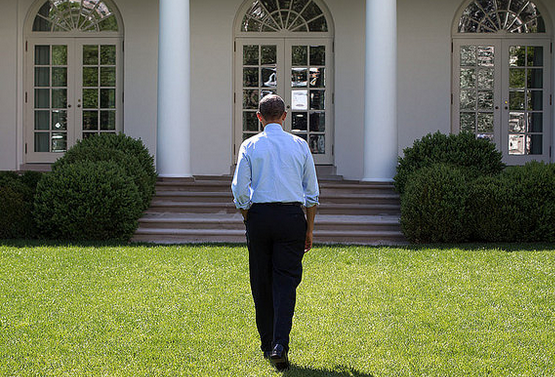 Seriously. How long is this puny game of government semantics going to hold up the already weak façade that we aren’t currently at war in Iraq?

When Defense Secretary Chuck Hagel announced earlier today that another 130 U.S. military “advisers” would be sent to Northern Iraq, he made sure to reassure the Marines that this isn’t “boots on the ground”.

“This is not a combat boots on the ground kind of operation,” Hagel said.

No? So their boots will be levitating off the ground when they get there? Will they be flying around on hoverboards like in Back to the Future II?

This article from USA Today shows that Obama had already sent 475 troops to secure the embassy in Baghdad and another 300 “military advisers” back in June. In July, Obama quietly sent more.

At this point, the number of U.S. troops now in Iraq has actually doubled since June and that doesn’t even count the guys recently sent in to drop bombs on ISIS, but still.

No boots on the ground. Obama said so.

Under the premise put forth by the Obama administration that there’s “no military solution in Iraq,” Obama has now announced airstrikes…an airstrike being what happens when a fighter plane flies in and drops bombs on a country…in Iraq. And no, not just a few airstrikes, but a lengthy “stay”. Could take months, the government is now saying.

Still, The New York Times tells everyone, “Obama, with Reluctance, Returns to Action in Iraq”.

Not war, mind you. Not even “military action”.

Because this isn’t going to be boots on the ground. It’s even being referred to as “Operation No Boots on the Ground”.

Let’s see. The first definition of war in the dictionary is “a conflict carried on by force of arms, as between nations or between parties within a nation; warfare, as by land, sea, or air.”

By land, sea or air? Check.

I’m not even going to waste my time or yours looking up the definition of the word “on,” and if you’ve read this article thus far, I’m sure you know what the ground is.

“We will not be sending troops back into combat in Iraq,” Obama said back in June. Here’s the video in case you need to hear the words cross his lips yourself. He also said there would be no boots on the ground.

So I get that Mr. Obama really wants that legacy of being the president that ended the war in Iraq…

But come on America, how many military “advisers” and airstrikes equals a war?

Maybe the president just needs a new dictionary. In the meantime, maybe if we stop funding, training and arming these people in one country under the guise of calling them “rebels,” we wouldn’t need to then blow them up in neighboring countries when they get out of control and commit genocide.