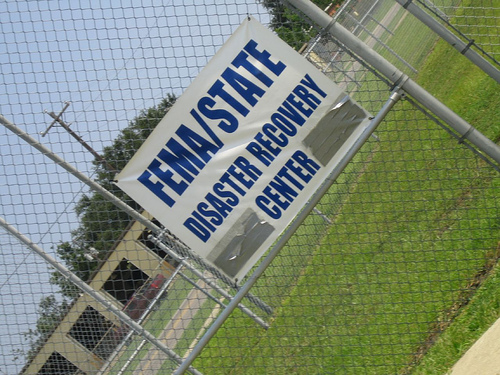 Now even the mainstream media is admitting that during an Ebola panic “people could be detained for long periods, merely on a suspicion they might have been exposed to some pathogen.”  As you will read about below, federal law contains some very vague provisions which could be used to indefinitely quarantine large numbers of Americans in the event of a significant Ebola outbreak in the United States.  So where would all of those people be put?  Certainly they would not be mixed in with prison populations, and our hospitals would only be able to handle a very limited number of Ebola patients.  Once our medical facilities are overwhelmed, it is inevitable that those that have Ebola or that are suspected of having Ebola would be housed in temporary holding centers, tent cities, sports stadiums, old military bases and FEMA camps.  Of course strict measures would be taken to ensure that the quarantine is not broken.  So no matter what official name is given to these facilities, they would in essence be prison camps.  No unauthorized personnel would be going in or out.  And since the federal government already has the power to round up and detain anyone “reasonably believed to be infected with a communicable disease”, the potential for abuse is staggering.

The global death toll has now passed 1,000 for the first time, and many in the mainstream media are starting to realize that there is a very strong possibility that we could soon start seeing cases of Ebola in North America.

And if Ebola does start spreading across the United States, it is inevitable that there will be a very strong response by the federal government.

A piece that was written for Forbes entitled “If Ebola Arrives In The U.S., Stopping It May Rely On Controversial Tools” that was authored by former FDA official Scott Gottlieb spells out some of the “spooky” measures that could be implemented if we do indeed see a major Ebola outbreak in this country…

The existing rules leave a murky and potentially intrusive scheme largely intact. The Bush era regulation laid out some spooky scenarios where people could be detained for long periods, merely on a suspicion they might have been exposed to some pathogen.  And forced to submit to certain medical interventions to gain their freedom. But the existing rules in force today leave possible these same scenarios – only without any protections that could be spelled out in clear regulations.

So what would those “medical interventions” include?

Are we talking about mandatory drugging or mandatory vaccines?

In the presence of a suspect case of Ebola, the official CDC website details ‘Specific Laws and Regulations Governing the Control of Communicable Diseases’, under which even healthy citizens who show no symptoms of the virus could be forcibly quarantined at the behest of medical authorities. The existing regulations stipulate, “Quarantine is used to separate and restrict the movement of well persons who may have been exposed to a communicable disease to see if they become ill.”

In other words, you don’t have to be sick to be detained. Just suspected by health officials of having been in contact with someone who might have had the disease.

The regulations say a person “may be detained for such time and in such manner as may be reasonably necessary.” Is that three days or thirty? There are no rules.

You might be thinking that we could just test those that are potentially sick and then release those that do not have the virus.

Well, the truth is that there are only a few labs in the entire country that are capable of conducting these tests.  During a major outbreak, it may be necessary to test thousands (or even millions) of Americans for the disease.  But the infrastructure that we have is simply not able to test that many people.

And remember, Ebola victims can be carrying around the virus for up to three weeks before showing any symptoms and Ebola can remain in the systems of recovering victims for up to seven weeks.

So would it be “reasonable” to isolate potential Ebola victims for ten weeks or longer?

Perhaps someone should pose it to someone at the CDC.

And without a doubt, our health authorities have been thinking about these types of issues.  For example, at the end of July a page on the CDC website entitled “Legal Authorities for Isolation and Quarantine” was updated.  The following is an excerpt from that page…

Isolation and quarantine are public health practices used to stop or limit the spread of disease.

Isolation is used to separate ill persons who have a communicable disease from those who are healthy. Isolation restricts the movement of ill persons to help stop the spread of certain diseases. For example, hospitals use isolation for patients with infectious tuberculosis.

Isolation and quarantine are used to protect the public by preventing exposure to infected persons or to persons who may be infected.

In addition to serving as medical functions, isolation and quarantine also are “police power” functions, derived from the right of the state to take action affecting individuals for the benefit of society.

In between vacations, Barack Obama has spent some time on these issues as well.  In fact, Barack Obama recently signed an executive order that gives the federal government authority to round up and detain anyone that shows symptoms of “diseases that are associated with fever and signs and symptoms of pneumonia or other respiratory illness, are capable of being transmitted from person to person, and that either are causing, or have the potential to cause, a pandemic, or, upon infection, are highly likely to cause mortality or serious morbidity if not properly controlled.”

And even before that executive order, federal law already allowed the federal government to apprehend any person “reasonably believed to be infected with a communicable disease” and detain them “for such time and in such manner as may be reasonably necessary”.

However, it would not just be sick people and potentially sick people that would be detained during an Ebola crisis.  The panic and fear that an Ebola pandemic would create would likely set off waves of rioting, looting and lawlessness similar to what we witnessed in Ferguson, Missouri in cities all over the nation.  If things got bad enough, it is very easy to imagine martial law being declared.

Right now, U.S. health officials are trying to keep everyone calm by insisting that the spread of Ebola “requires direct contact with bodily fluids” and that our health infrastructure is far superior to what they have over in Africa.

And many have pinned their hopes on defeating this Ebola outbreak on a new “miracle drug” known as ZMapp.

Well, an elderly Spanish priest that contracted Ebola in Liberia was being treated with this drug and now he is dead…

An elderly Spanish priest infected with Ebola has died in a Madrid hospital, five days after being evacuated from Liberia. The 75-year-old Roman Catholic priest, Miguel Pajares, was being treated in Spain with an experimental US serum, ZMapp, after being flown to Madrid on August 7. He contracted Ebola at the Saint Joseph Hospital in the Liberian capital Monrovia where he worked with patients suffering from the disease. It is confirmed. He died at 9:28 am,” said a spokeswoman for Spain’s La Paz-Carlos III hospital. The priest had been treated with ZMapp, she said.

And at this point, all existing supplies of ZMapp have been completely exhausted.

So even if this drug did work, it is going to take quite a while to produce a sufficient amount of it.

Sadly, very few people seem to grasp how very serious all of this is.  We could potentially be looking at the greatest health crisis in modern American history.  It is conceivable that millions of people could end up dead.

Of course it is also possible that this Ebola crisis could fizzle out over the next few weeks.  Let us hope that ends up being the case, because a full-blown Ebola outbreak in the U.S. would be an absolute nightmare.