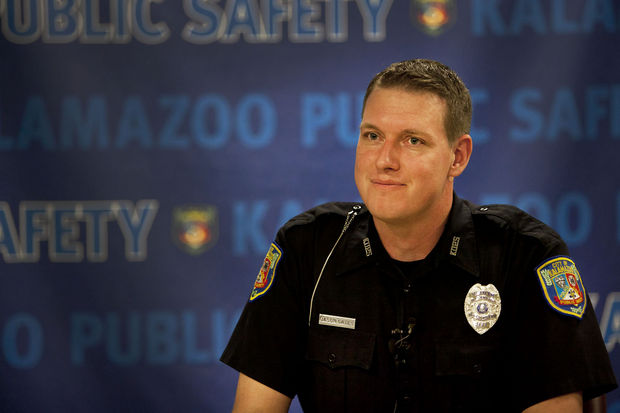 Here at The Free Thought Project, we like to give credit where credit is due.

Officer Jason Gates of the Kalamazoo police department in Michigan, deserves some credit.

Gates was sitting in his patrol car near the 4100 block of S. Burdick Saturday, when a car zipped past him and ran a red light.

According to the police report, upon pulling the car over, he found the female driver was in respiratory distress. Officer Gates asked the driver if she was ok, but quickly realized she was not able to breathe.

Officer Gates administered a couple of back blows, attempting to dislodge the unknown item in the female’s throat.

The back blows did not work, so Officer Gates quickly removed the distressed female from the driver’s seat.

Officer Gates then used the Heimlich maneuver to dislodge the stuck sausage and bun from the females’ throat.

The female immediately began crying, throwing herself into Officer Gates’ arms, thanking him for saving her life.

The report does not state whether or not the driver was still given a citation.

Officer Gates actually displayed a certain level of discretion during this stop and ended up saving a woman’s life; and for that he deserves credit. Other officers would do well to follow Gates’ example.

Unfortunately we often see the exact opposite reaction from overzealous officers on a mission to escalate violence.

In June we brought you the story of 70 year old Thomas Mathieu, who was stopped in the middle of the road because he was experiencing a diabetic attack. Instead of helping him, police proceeded to thoroughly stomp him into the ground, only finding out that he was having an attack after inflicting lacerations all over his body and breaking several of his ribs.

There is also the case of Robert Kim, who was also beaten and tased during a diabetic episode  because he was physically unable to respond to officers’ demands.

In July we covered the story of Tyler Harney who was convulsing uncontrollably as a result of a seizure disorder. The officer tells him to stop having the seizure or he would break his arm. Obviously Harney was unable to stop his seizure, so the officer broke his arm.

Instead of “fearing for his life” or seeing this woman as a potential mark on his quota, Officer Gates saw her as a fellow human in need and reacted with compassion and rendered aid. Thank you Officer Gates for retaining your humanity.