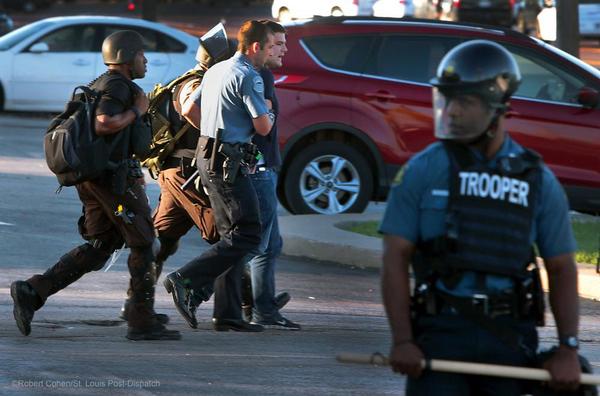 While police in Ferguson, Missouri were largely AWOL during looting that struck the town on Sunday, they were out in force once again last night to strangle the First Amendment by pointing sniper rifles at protesters and arresting journalists.

With authorities attempting to enforce an arbitrary night time ban on protests, peaceful demonstrators gathered once again yesterday but were met with rubber bullets, tear gas and intimidation tactics that wouldn’t have looked out of place in Tahir Square.

The unrest was sparked as a result of the shooting of 18-year-old Michael Brown on Saturday night, who eyewitnesses said was unarmed and offered no resistance.

While criminal opportunists who came in from out of town to loot local stores on Sunday were left alone, police made sure that journalists attempting to document the crackdown were targeted.

The Washington Post’s Wesley Lowery was arrested, leading the newspaper to slam an “illegal assault on the freedom of the press to cover the news.”

The Huffington Post’s Ryan J Reilly was also handcuffed as he was charging his phone in a local McDonalds. According to Reilly, cops arrested him because he photographed them and didn’t pack his bag quickly enough. The Huffington Post said the arrest was an example of “militant aggression.”

Here's a new pic of @ryanjreilly of the @huffingtonpost getting arrested. Credit @kodacohen #Ferguson pic.twitter.com/BjWxkCr7WJ

Even the Ferguson Police Chief was baffled by the arrests. When Chief Thomas Jackson found out about the incident, his stunned response was, “Oh God.”

Infowars reporter Joe Biggs was also shot in the kidneys by a rubber bullet as police seemed to be deliberately targeting journalists.

“I got shot in the kidneys with one of those rubber rounds and had two gas canisters come right at me,” Biggs reported. “When I got up, I couldn’t see so I went in one direction and lost [Infowars reporter] Jakari Jackson and [Infowars cameraman] Josh Owens.”

The state's ultimate function is to terrorize the people. #Ferguson #HandsUpDontShoot pic.twitter.com/p8FZooWGHP

Owens made it inside of a car with a reporter from Vice News but police pinned down their vehicle and shot flash bangs and tear gas at them.

Later in the evening, police suddenly announced “the peaceful assembly is no longer peaceful” after one individual threw a bottle in the direction of the police line, prompting authorities to order a curfew under which all the protesters were told to go back to their homes or be arrested.

Not long after, the demonstrators on West Florissant Ave. were assaulted.

“We all got split up when a SWAT Team approached us and started throwing flash bangs and shooting tear gas and all kinds of [so-called] non-lethal rounds at us,” Biggs said, who was dropped to his knees by the round that hit him. “That took my breath away but when I was finally able to take a breath, I took in a nice helping of tear gas.”

“They are shutting down the entire road and there’s word that they are looking specifically for journalists to arrest them,” Biggs revealed. “Why? Because they don’t want the truth about what’s going on to come out.”

Police then set off flash bombs and tear gas in an attempt to disperse the remaining protesters.

In a sign that the protesters were apolitical, they complained that both Al Sharpton and President Barack Obama “didn’t do sh*t for us.”

The people of #Ferguson are pissed at Obama and Al Sharpton via live stream. "Didn't do shit for us" and "Fuck Sharpton"

The fact that domestic law enforcement authorities have openly declared the American people to be the new enemy and are now arming themselves with equipment and vehicles formerly used to hunt insurgents in Afghanistan and Iraq ensures the kind of scenes witnessed in Ferguson will become more prevalent throughout the country.

By becoming increasingly militarized and brutal in its treatment of the American people, the state is not only preparing for but actually provoking civil unrest, the outcome of which can only be negative for both the general public and law enforcement officers.