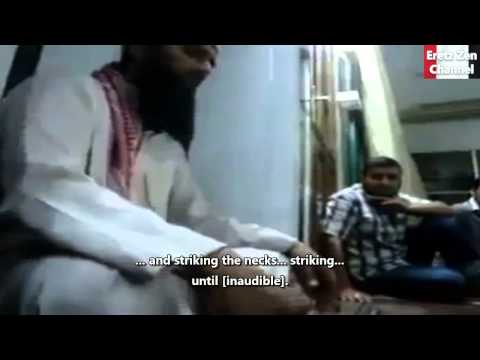 Well, this isn’t going to be something you see in the mainstream media, nor Fox News for that matter. You certainly won’t hear the White House speak about this since they affirm that Islam is the “religion of peace” and that that antidote to terrorism is Islam.

The source of the video is al-Alam TV. According to the video, which is of a Wahhabi Cleric, he demonstrates to those he is teaching the proper way to kill the enemies of Islam.

It appears the cleric is interrupted by a question, to which he responds, “Not in this (inaudible), Not by slaughter.”

Upon saying these words, he seeks to demonstrate how to kill the infidels. The cleric stands up, takes his sword in hand and declares, “This means you take the sword, you place the head like this, and then you enjoy yourself with it.”

He then simulates the motion of slowly cutting through the neck of the victim saying “Do not slaughter him yet,” and as he pulls back on the sword amidst laughter from his disciples, he declares, “Start again… no, not yet, retract the knife… and striking the necks… striking… until (inaudible).”

“He said, ‘And it is the slitting of the throat,'” the cleric continued as the listeners watch with smiles as he takes his hand like a blade and motions back and forth against his neck.

“Take pleasure in doing it!” the cleric declares.

He then quotes Al-Qurtubi saying, “And it is the slitting of the throat… not its severing. Pay attention! ‘Slitting.'”

While the video’s title speaks of beheading, the cleric is clearly not teaching that, even by translation, unless I’m missing something. He clearly says not to “sever.” However, since one is “enjoying themselves” and are full of the demonic teachings of Islam, why should one stop at mere slitting? Why should they not enjoy themselves, completely behead their victim and then hold it up, even let their children hold it up and display it or put it on a pole? After all, isn’t that following in the footsteps of Mohammed? He did it.

Watching this guy talk about murdering innocent people and people looking on listening and laughing is so surreal, almost to the point of feeling like you stepped into the Twilight Zone.

My friends, this is Islam in all its infamous glory. This is what it has in store for every last infidel who will not submit to it. While some say Islam is in need of reform, I say that Islam is in need of destruction. It is a vile, perverted totalitarian system that enslaves men and women and men are taught to treat their fellow human beings as less than animals.

When there was the Reformation in Christianity, it sought to recover what had been lost, namely the gospel. Men had been trusting in their works to justify them before God, instead of faith in the Lord Jesus Christ, which then results in good works (Eph. 2:8-10). The Refomation sought to turn men from being anthropocentric (man-centered) to being theocentric (God-centered).

Reformation cannot be achieved in Islam, unless those who name the name of Mohammed are willing to go back and fully engage in the barbarism he instructed them in. If they are to reform against that, then they should abandon Islam totally, and my King, King Jesus, commands them to repent and follow after the true and living God of the Old and New Testaments.