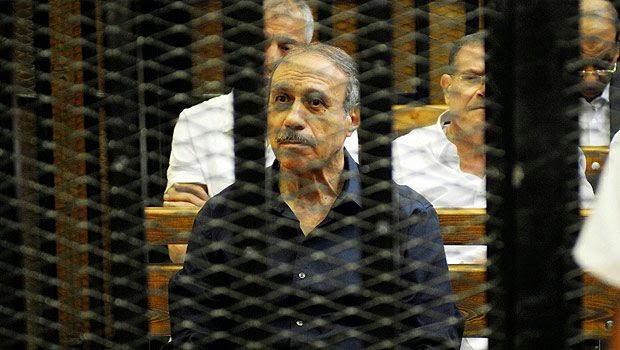 Over the weekend, the former Egyptian Interior Minister under Hosni Mubarak, Habib El-Adly, gave a speech at his own retrial in Cairo, Egypt. Among a number of generic statements, El-Adly made at least two bombshell claims during his testimony that have received little to no coverage in the Western press.  One of these claims was that the United States was behind the 2011 Egyptian revolution which overthrew Hosni Mubarak. The other, however, was that the Egyptian intelligence agencies and Interior Ministry received information regarding a developing terrorist operation against the United States in September, 2001 and that the Egyptians warned the United States twice ahead of time. According to El-Adly, these warnings were completely ignored. NOTE: The translation provided below is a rough translation of the statements, not a professional one. In his televised testimony, El-Adly stated,

In May 2001, we received information that a very huge terrorist attack will happen in the USA. How? The source of the information was inside the lair of Al-Qaeda. And we verified it, that there were preparations for the attack.

I talked to the President (Mubarak) and I told him that I have information that a huge terrorist attack will happen in the USA, and I asked him if we should tell them [the Americans]. He said “OK.”

We contacted the CIA and FBI and told them about the information, they said “Thanks.”

On August of the same year we received the information that the (operation) entered its course of implementation (is entering its final steps).

An operation like this takes time, preparations and arrangements, etc. This conversation was recorded between us and the source. I called the President and told him the information is confirmed, “Should we tell them?” He said “Tell them.” We called the people in the USA and told them that the operation entered the course of implementation. They said “OK” and “Thanks.”

Then the attack on the WTC happened. This was the operation. Do you see how cooperative we were?!?! This is why I am furious and enraged. I cooperated with them, and in return they hit my organization and destroyed (ruined) the country (Egypt)!!!

El-Adly then continued discussing how, according to him, in 2002, Mubarak questioned President Bush about the fact that the United States was warned about the impending attack but failed to act. El-Adly stated,

President Mubarak traveled to America in 2002. When there, he told President Bush, “We told you about this attack and you didn’t pay attention.” He [Bush]said “What attack?” And How?

Bush denied that they heard about that and Mubarak insisted that they did. Mubarak called me to confirm that we informed them about the information. He asked me who did I tell? I said “The CIA people.” He said “Ok” and told Bush. It seems the CIA people told Bush that they didn’t receive any news, and Mubarak told him “no, we informed you this and that.” Then they said “Oh, yes it happened but it was only told verbally.”

If El-Adly’s statement is correct then it seems that the same infantile argument was used to quiet the Egyptians as was used when Condoleezza Rice was forced to confront the famous 9/11 memo.Regardless, El-Adly’s statements corroborate what was known some time ago in terms of Egyptian knowledge of a potential terrorist attack inside the United States as well as the fact that the Egyptians passed this intelligence on to the appropriate American intelligence agencies. The AP reported on December 7, 2001 that Mubarak claimed to have been aware of an impending terrorist attack and that he warned the United States ahead of time. The AP report states,

“We expected that something was going to happen and informed the Americans. We told them,” Mubarak said. He did not mention a U.S. response.

“But nobody expected the event would be of such enormity. We did not know that they would hit this target or that, and we were all surprised when planes with passengers on board hit the twin towers,” Mubarak said.

Also during the testimony, El-Adly stated that the United States was responsible for the 2011 uprising in Egypt that deposed Hosni Mubarak. He claims that the United States had a two-fold plan. The first part of the plan was to offer financial incentives to adopt the leadership model provided by the US and, if the leaders refused, to accuse them of being dictators. The second part of the plot was to mobilize the “golden youth” of these countries and use them to destabilize and overthrow the existing governments. In essence, El-Adly revealed that the United States planned and carried out a Color Revolution in Egypt in 2011. Specifically, El-Adly claims that the United States trained “activists” within the Kefaya and April 6 Youth Movement as well as the Muslim Brotherhood in Qatar in order to act as destabilization agents in Middle Eastern countries. El-Adly also claims that “foreign elements” were brought in to the movements that these foreigners and initiated violence in the streets across Egypt, particularly in Suez and, eventually, Cairo. El-Adly describes security forces as showing surprising restraint throughout the entire ordeal. El-Adly also stated that there were “moles” within the Egyptian police forces who gave weapons to “Palestinian Police” who then fired on Egyptian activists for the purposes of framing Egyptian police.As Ahram Online reports,

El-Adly, during a speech to a Cairo criminal court where he is being retried, said the US had two parts to its plan. The first part was to approach leaders of the Middle East with a democratic model and financial incentives to adopt that model. If the leaders of those countries refused, according to El-Adly, the US would accuse them of being dictators.

The second part of the US approach was mobilising youth in those countries and teaching them how to demand their rights, demand democracy and how to revolt against existing regimes, El-Adly added.

He added that the US trained youths in Egyptian opposition groups Kefaya and the 6 April Youth Movement, and Muslim Brotherhood youth in Qatar and other Arab countries, to “learn democracy.”

El-Adly described himself, as well as those prosecuted alongside him, as “national figures who have performed their duty to the fullest.

That the Egyptian 2011 uprising was nothing more than a Western-backed Color Revolution is clearly documented. As F. William Engdahl wrote for Global Research in February 2011,

The protests that led to the abrupt firing of the entire Egyptian government by President Mubarak on the heels of the panicked flight of Tunisia’s Ben Ali into a Saudi exile are not at all as “spontaneous” as the Obama White House, Clinton State Department or CNN, BBC and other major media in the West make them to be.

They are being organized in a Ukrainian-style high-tech electronic fashion with large internet-linked networks of youth tied to Mohammed ElBaradei and the banned and murky secret Muslim Brotherhood, whose links to British and American intelligence and freemasonry are widely reported.

At this point the anti-Mubarak movement looks like anything but a threat to US influence in the region, quite the opposite. It has all the footprints of another US-backed regime change along the model of the 2003-2004 Color Revolutions in Georgia and Ukraine and the failed Green Revolution against Iran’s Ahmedinejad in 2009.

Engdahl’s analysis turned out to be accurate indeed. Still, if El-Adly’s statements regarding the foreknowledge of the 9/11 attacks which were passed to the American intelligence community and subsequently ignored are true (which they appear to be based on other related information), such information coming less than a month away from the anniversary of 9/11 should serve as an incentive to continue to lobby for a real investigation of 9/11 as well as the refusal to allow the official story to remain unchallenged. Likewise, his statement regarding the 2011 uprising should stand as yet another piece of evidence that the so-called “democracy” movements taking place across the Middle East were nothing more than Western-backed coups and destabilizations.El-Adly’s video testimony is posted below for those who speak Arabic and would like to add to or challenge any part of the above translation. Please leave additional information in the article comment section.  https://www.youtube.com/watch?v=XPKQSMRshXw https://www.youtube.com/watch?v=NIl3lfpqwWo