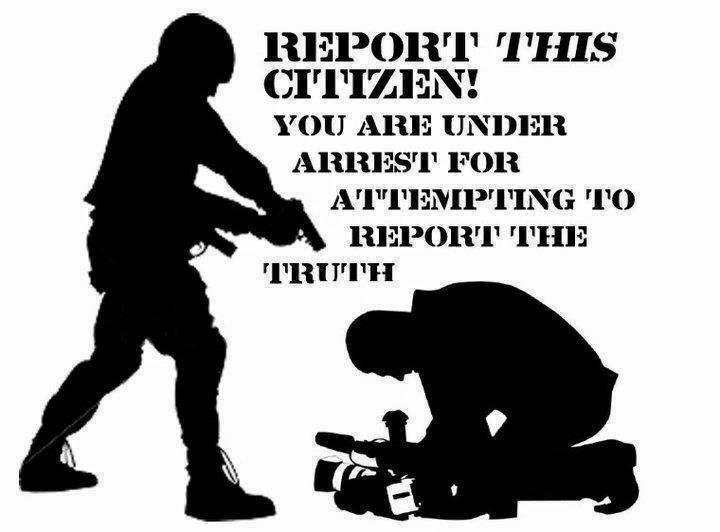 Despite the Supreme Court having ruled that videotaping police is legal and protected by the 1st Amendment, citizens all across the country continue to be arrested, charged, and abused by police for doing so.  Generally speaking, those videotaping and subsequently subjected to police harassment or brutality are activists or otherwise concerned and “average” citizens. However, the police state grows bolder and bolder every day in its attempt to crush dissent and instill the concept that challenging the power of the state will not be allowed, regardless of social standing. Such is the case with the recent arrest of Randy Credico, a Democratic primary candidate in the New York State Governor’s race who is challenging corrupt New York Governor Cuomo. Credico was arrested on August 13, 2014 while on his way to a campaign interview. Credico, while waiting at the Dyckman Street subway stop in New York City, witnessed two plain clothes men aggressively stopping and harassing a man in the tunnel. At first unaware of the fact that the two men were police, Credico whipped out his cellphone camera and began filming. When the two men, who were actually plainclothes transit police, discovered that they were being filmed, they arrested Credico.

Despite the fact that the New York Police Department’s own Police Department Patrol Guide states that “taking photographs, videotapes or tape recordings” is not cause for arrest or detention so long as the activity does not jeopardize the safety of officers or others, Credico is being held in the Bronx at the Transit Police office at 145 Street and St Nicholas Avenue (1-212-281-5303). (Editor’s Note: This article was originally published yesterday, August 14th, 2014 and Credico was also scheduled to be arraigned yesterday.)According to the New York Times, federal rulings in Baltimore, Boston and Indianapolis affirm that recording officers in public places is protected by the Constitution. Regardless, there has been no court ruling where this decision has been established specifically naming New York City. Apparently the absence of a Federal Court ruling establishing the rule of Constitutional Law to New York City specifically is all that is needed by the NYPD to engage in a Stalin-style crackdown on civil liberties. Currently, the police are refusing to give Credico an appearance ticket (that is, release him with an order to show up in court on a specified date), claiming that he has an outstanding warrant for disorderly conduct from 2012, according to a press release from Credico’s campaign. Credico’s associates deny this and claim that, as a candidate for Governor, he is highly visible and is in the news every day. He has also made several court appearances related to the campaign. If there really was an outstanding warrant, he would have been arrested long before this, he claims. Credico was kept in jail overnight and was to be arraigned on August 14. While one’s social status should never be grounds for the decision by police to arrest or not, the fact that a New York State gubernatorial candidate is not safe from the brutality and treacherous violation of rights by the NYPD, one of the most corrupt and vile police departments in the country, is a testament to the fact that the police fully see themselves as above the law. While it is not likely that gun-grabbing Mayor de Blasio will ever be in danger of arrest by the NYPD, the New York Police Department has been waging war on the people of New York City for years, with its efforts recently intensifying. Murders, shootings, general brutality, stop and frisk, and other forms of Constitutional Rights violations and harassment are the stock and trade of the NYPD. Unfortunately, the NYPD is not seen as a shame to police forces across the country, it is seen as a model.