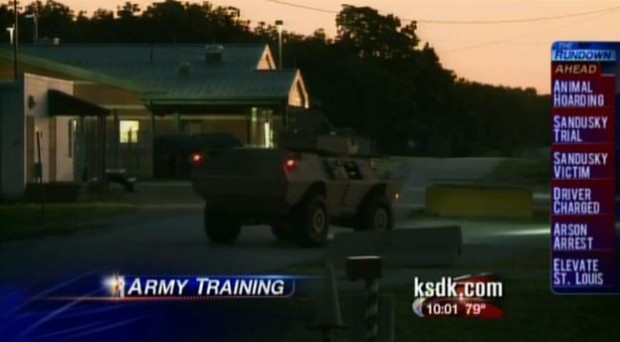 For those who are unaware, Ferguson is basically a suburb in North St. Louis.

For anyone who has ever lived in a large city, you will understand that Ferguson is basically part of St. Louis but with its own unique identity. After this week that identity is something that Ferguson might not want to claim.

In January of 2013 I wrote an article called “Blackhawks, Tanks, DHS Ammo Containers and Litmus Tests?”

That article has been on my mind all week.

Because even though I have written about the movement of military equipment many times in the last two years, that is the only time I have ever written about heavily armored vehicles actually rolling through the streets of an American city. I had to go back and look at the article and video because I was curious. Though the local news report did not specifically mention Ferguson, it did mention that the military vehicles were moving through NORTH St. Louis. Here is the video which was shot in 2012:

Does this mean anything? I don’t know.

I understand that the news report makes it sound like a driver’s education class for tank operators. I also know that the real story and the story we are given are not always the same. I just can’t understand why they would risk an accident in a major city when it has been revealed that our military has its own replica cities for training. Why can’t they practice in Virginia rather than risk an accident with civilians involved?

It is a legitimate question.

We have certainly heard plenty of rumors and even had one congressman call for military presence. For those who may have missed it, Representative John Lewis has called for martial law in Ferguson.

The question in my mind is if this 2012 “drill” or “training” has anything to do with what we are seeing now. It might seem like a stretch to say that, however…

For anyone who lives in San Francisco, Dallas, Chicago, Boston or Miami…

Or any other large city in America…

When was the last time you saw military tanks and heavily armored vehicles rolling through your streets?

Why the North side and not the South side for these drills?

Earlier in the week Jerome Corsi revelealed that the Northern part of St. Louis has actually been deemed by the French government as an unsafe place to visit. Could it be that our government has been waiting for something to happen there?

I can’t totally dismiss that they were training for something that was specifically in North St. Louis. If that is the case then we may be far from done in Ferguson. Early morning news reports seem to indicate that tensions started to rise again last night after they seemed to be calming.