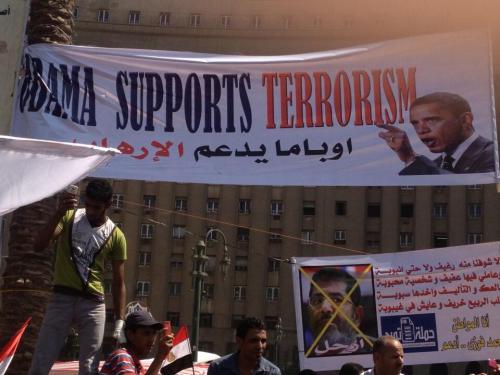 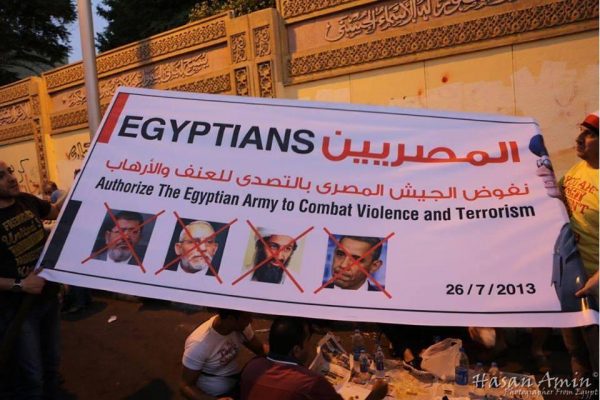 A short but explosive video of former CIA Director James Woolsey in 2006 has been introduced into evidence at the trial of former Egyptian President Hosni Mubarak and his officers. In that video, Woolsey advocates the removal of Middle Eastern dictators, even mentioning Mubarak by name while strongly implying that after the fall of Saddam Hussein in Iraq, the U.S. would seek similar regime changes in Libya, Syria and elsewhere to make the Saudis and Mubarak ‘nervous.’

If you’ve ever beaten your head against the wall trying to figure out the post-9/11 strategy of the U.S. and why we went into Afghanistan and then Iraq instead of confronting Saudi Arabia directly, the video below might help explain the thinking. It was relayed to us by a reliable Middle Eastern source who has been monitoring the court proceedings (note Arabic subtitles for trial):

Since the Brotherhood seeks the destruction of the United States, any scenario that puts them in control of a country is unacceptable. Curiously, as the Brotherhood was ascending to power in Egypt, former U.S. President George W. Bush penned a pro-Arab spring op-ed.

Assuming the strategy espoused by Woolsey during the Bush administration might work, an even more important contingency doesn’t appear to have been considered. Specifically, what happens when the U.S. elects a President who is in league with the Muslim Brotherhood?

To be fair, at the time of that video, it had been 11 years since Woolsey was the CIA Director. Perhaps he’s even changed his view in the eight years since but the fact that what he advocated then is very similar to what we’ve recently seen could make it much more relevant. As Shoebat.com has previously pointed out, the Bush administration – as well as the 9/11 commission – appeared to cover up for and protect the Saudis, despite the latter’s complicity in the attacks. Even more curious was Bush’s decision to embrace Muslim Brotherhood front groups after 9/11.

Doing so was an extremely gross miscalculation.

Applying Woolsey’s calculus to all of that could eventually lead to a U.S. alliance with the Muslim Brotherhood in the Middle East. Instead of a policy that called for confronting the Saudis head-on, Woolsey implied doing so covertly, presumably through proxies and agitators. As it turns out, in Egypt, the Brotherhood benefited.

A trial taking place in Egypt right now could be revealing the Obama administration’s sinister involvement in the removal of Hosni Mubarak from power in 2011, which paved the way for the election of the Muslim Brotherhood’s Mohammed Mursi as President. Within a year, it was Mursi who was removed, but what happened in the interim is coming to light.

Consider the recent testimony of Gen. Adly Fayed, former Interior Minister for public security. According to Fayed’s testimony, the U.S. embassy reported no fewer than four vehicles being stolen on January 28, 2011. These vehicles were then used to instigate riots and run people over. It strains credulity to believe that the U.S. embassy in Cairo did not have these vehicles secured.

A CNN report at the time included video footage of a U.S. diplomatic vehicle recklessly running over people. In that report, it was stressed that the Embassy insisted the vehicles were stolen. However, in issuing his report, Anderson Cooper made a very bizarre, contradictory and convoluted statement that actually lends credibility to Fayed’s testimony. Here is what Cooper said at the end of the clip below (damning claim in bold):

There you have it. Cooper said the idea that the vehicles were stolen doesn’t make sense because the embassy was on “lockdown”. How do vehicles get ‘stolen’ from an Embassy on “lockdown”? He then confusingly used that premise to justify the claims the vehicles were stolen. It appears Mr. Cooper may have inadvertently made an excellent point. The rest of that quote is simply incoherent. Watch for yourself:

Here is the relevant audio:

Shockingly, according to CNN’s written report the number of vehicles ‘stolen’ reached twenty:

A white diplomatic van shown plowing into anti-government protesters in Cairo might belong to the United States, officials said, adding that 20 such vehicles have been stolen in Egypt amid the unrest.

Since at least one of these vehicles was used to mow people down in the streets, has there been an investigation? What are the results? If the embassy was on “lockdown”, how did twenty vehicles end up stolen? Was there anyone fired? Who was manning the gate?

Another figure who testified in Mubarak’s trial was Habib el Adly, the longest serving Minister of Interior Affairs under Mubarak. Of the 2011 uprising that led to the removal of Mubarak, el Adly testified it was a ‘conspiracy’ orchestrated by the Obama administration, not a revolution:

“Revolutions have specific definitions, and these definitions are not aligned with what happened on 25 January,” he said.

Further testimony from el Adly involved a meeting he attended three days earlier. It was decided that internet service would be suspended in response to the effectiveness of social media in generating unrest. El Adly testified that after this was done, he received a call from U.S. Ambassador Anne Patterson demanding that internet service be restored.

This was reported in Arabic media and confirmed by our source.

El Adly also testified that Wael Ghonim, a Google employee who became the face of the uprising, conspired against his own nation. Perhaps no better visual reveals the bitter fruit of Ghoneim’s efforts than when he attempted to take the stage in Tahrir Square after Mubarak’s ouster only to be sent away in disgrace so that Muslim Brotherhood spiritual leader Yusuf al-Qaradawi could steal the limelight.

According to our source, the Egyptian officers testifying at this trial are making the case that Patterson – as an arm of Obama – set them up while covertly aiding and abetting the rise of the Muslim Brotherhood there by being an active participant in the uprising and agitation that led to Mubarak’s removal.

Obama’s alliance with the Muslim Brotherhood

If the Obama administration’s support for the Muslim Brotherhood over Mubarak was not obvious prior to the latter’s overthrow, it was made all too clear after the overthrow of Mursi, Mubarak’s Muslim Brotherhood successor, last year. Inexplicably, Obama’s administration went into overdrive in an attempt to put the toothpaste back into the tube. Strangely, even two Republican Senators – Lindsey Graham and John McCain – traveled to Egypt essentially as emissaries for Obama and diplomatic lobbyists for the release of Muslim Brotherhood leaders.

Despite their attempts at hedging, it was clear during their trip to Egypt last year that Graham and McCain wanted Brotherhood prisoners released:

As Shoebat.com reported, State Department Deputy Secretary Bill Burns went to Egypt at the time and had a secret 90-minute meeting with Khairat al-Shater, the jailed Muslim Brotherhood leader in hopes of negotiating his release. Al-Shater’s chief of staff is a Muslim Brotherhood agent who was also eventually jailed and worked at the Clinton Foundation for years.

The overthrow of Mubarak in 2011 led to the release of Muhammad Jamal Abdo Al-Kashif, the head of the Jamal Network, from prison. As our “Ironclad” Report has long maintained, Egypt’s involvement in the Benghazi attacks under Mursi is not a matter of if but of how much.

There has been a patently obvious attempt in the U.S. to overlook, suppress, or otherwise diminish an Egyptian connection to the attacks. Consider the testimony of Thomas Pickering, Accountability Review Board (ARB) Chairman on September 19, 2013. When asked by Rep. Cynthia Lummis (R-WY) if there was an Egyptian Muslim Brotherhood connection to the Benghazi attacks, Pickering inadvertently revealed that the classified report included the name of “one Egyptian organization” as being involved. It is believed that Pickering was referring to the Jamal Network.

It was an inadvertent and very significant admission by Pickering. This begs one very simple question: Why was the Jamal Network’s involvement in Benghazi considered “classified”?

In the weeks and months that followed, the State Department, the United Nations, and the Senate Select Committee on Intelligence (SSCI) all seemed to quietly acknowledge the Jamal Network’s involvement, while choosing not to focus on it.

As our comprehensive “Ironclad” Report makes clear, Mursi had multiple connections to al-Zawahiri. Mursi’s chief of staff during his presidency was al-Zawahiri’s first cousin Rifaa El-Tahtawi as Shoebat.com reported.

A verdict in the aforementioned trial that the Obama administration was directly involved in a conspiracy to overthrow Mubarak would make Obama culpable in the release of Al-Kashif, the reconstitution of his network, and the network’s involvement in the deaths of a U.S. Ambassador along with three other Americans.

That would mean American blood in Benghazi being on the hands of the Obama administration in an entirely new way. It would also explain why there has been such a concerted effort to avoid an Egyptian connection to the attacks.

Unfortunately, when it comes to this connection, it’s not just the Obama administration that avoids it. Conservative media seems disinterested as do conservative think tanks. As Shoebat.com has reported, even Vice President of the Conservative Center for Security Policy Clare Lopez attempted to impugn Walid’s credibility in an email we obtained. Of an Egyptian connection to Benghazi, Lopez said it was a “narrative that is lacking in corroboration” and that “Nothing any of them (to include Walid Shoebat) writes on this topic should be taken seriously.”

We now know that is simply not true.

In 2006, Woolsey advocated making Mubarak ‘nervous’ by removing other Middle Eastern leaders like Muammar Gadhafi in Libya and Bashar al-Assad in Syria. As it turned out, Mubarak was one of the Arab Spring’s first casualties in early 2011. Gadhafi’s fall was several months away and Assad is still in power, despite the Obama administration’s continued alliance with Saudi Arabia, Qatar, and Turkey to help overthrow him.

Obama’s 2009 Cairo speech – drafted by Rashad Hussain and Ben Rhodes – is widely seen as the shot across Mubarak’s bow that the Brotherhood was coming. Cairo is where the Brotherhood was founded after the House of Saud kicked its pioneers out of Arabia. Cairo has been ground zero for the Brotherhood for nearly a century. Its infiltrators inside the U.S. Government desired Brotherhood control of Egypt so badly they could taste it.

As Shoebat.com has reported, many Muslim Brotherhood leaders who successfully left Egypt have been parked in Turkey, waiting for another opportunity. Unfortunately, the Obama administration has also been aligned very closely with Turkey.

With both Turkey and the U.S. being NATO member states, such an alliance is made easier.

However, as Shoebat.com has reported, there is mounting evidence that Turkey is behind ISIS recruitment in an effort to resurrect its Ottoman Empire. Yes, that means a NATO ally of the U.S. is facilitating the rise of ISIS.

A very real consequence of fatally flawed U.S. foreign policies for years now has been and will continue to be Christian persecution that includes mass genocide.

After Mursi’s overthrow, Egyptians in overwhelming numbers saw Obama’s involvement in the rise of the Muslim Brotherhood there. In fact, they see it far more clearly than do Americans.

Here is a message from an Egyptian citizen posted to YouTube shortly after Mursi’s ouster: