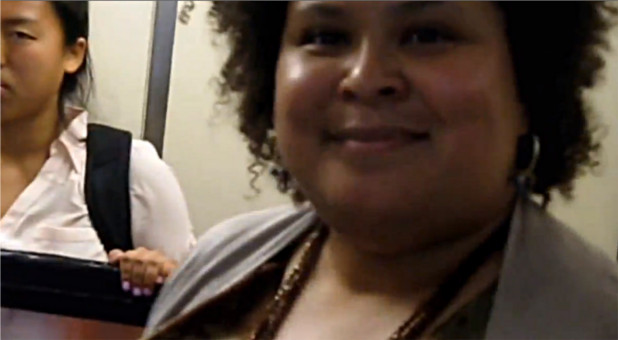 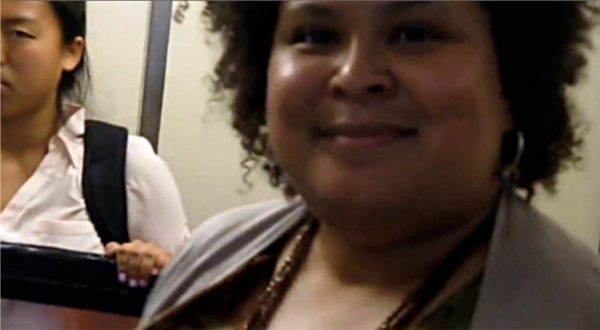 Many will remember the college professor, Mireille Miller-Young, of the University of California, Santa Barbara, who was arrested and charged with battery, theft and vandalism after attacking a group of anti-abortion protestors. In a strange and bizarre twist to this story, Miller-Young has now claimed as her defense, “slavery made me do it.” Yes, as bizarre as it sounds, Miller-Young’s attorneys have asked a judge to excuse her criminal behavior because of the “cultural legacy of slavery.” Even though slavery was abolished over 100 years ago and before Miller-Young was born, she has stooped to use slavery’s cultural legacy as a defense.

For those who are unaware, Miller-Young rounded up a few female vigilantes, forcibly stole a graphic anti-abortion sign from a peaceful protestor then scratched and appeared to push one young girl who was 16 years old. Miller-Young destroyed the sign after overpowering the young girl. When police arrived and asked if there was as struggle, Miller-Young responded, “I’m stronger so I was able to take the poster.”

At the time, Miller-Young maintained she felt “triggered in a negative way” by the poster’s graphic images and graphic images on corresponding anti-abortion literature. She never mentioned the bizarre rationale she is now trying to use as a defense. The police report, courtesy of The Santa Barbara Independent, can be read here.

Thrin Short, 16, and her sister Joan Short, 21, members of the pro-life group Survivors of the Abortion Holocaust based in Riverside, California, were standing in a designated “free speech zone” (which in itself is unconstitutional) at the UCSB campus when the younger sister was attacked by Miller-Young. The older sister, Joan, pulled out her cell phone and videoed Miller-Young committing the crimes. The video shows the younger Short asking Miller-Young to return the sign with Miller-Young responding, “I may be a thief, but you’re a terrorist.”

Not surprisingly, UCSB professors are coming to this woman’s defense by writing glowing letters to Judge Brian Hill, the judge presiding over her case. It was postulated in the Daily Caller report that many of these professors at UCSB wrote these letters on official UCSB letterhead and possibly “on school equipment and during their taxpayer funded work time.”

Paul Spikard, history professor at UCSB, stated in his letter to Judge Hill that Miller-Young was the victim of “an energetic smear campaign that has little to do with her person or her actions, and a great deal to do with fomenting racial hatred and rallying right-wing political sentiment.”

Really Mr. Spikard? Ms. Miller-Young forcibly removed the possession, a sign, from the hands of a 16-year-old girl, then scratched and pushed this young girl – all captured on video. Her actions were criminal, Mr. Spikard, or is the law not relevant to you? Where I come from, Mr. Spikard, Ms. Miller-Young would have had plenty of company in that jail cell, as many parents in the South do not cotton to their children being assaulted by adults as Ms. Miller-Young clearly was recorded doing.

Another professor, one Eileen Boris in USCB’s department of feminist studies, has urged Judge Hill to “be lenient” since Miller-Young was three months pregnant at the time of the incident.

According to Fox News, Boris wrote in her letter:

She was at the stage of pregnancy where one is not fully one’s self fully, so the image of a severed fetus appeared threatening. If she appears smiling on camera, she is ‘wearing a mask,’ that is, she is hiding her actual state through a strategy of self-presentation that is a cultural legacy of slavery.”

What? From looking at Eileen Boris’s profile at UCSB, she has a lot of accomplishments but it does not indicate whether or not she is married or has children. How can a woman speak of what being “fully one’s self fully” is when pregnant if they have not been pregnant themselves? As a woman who has been pregnant and is a former medical professional, being three months pregnant does not cause a woman to become unaware of one’s self or one’s actions. In fact, being three months pregnant has caused women to become more protective of themselves, avoiding anything that might harm their baby, which would include any physical altercation that could result in injury and any form of stress. And, as Ms. Boris seems to be unaware, there is always the action of refusing to look if there is something you find disconcerting – it’s called personal responsibility.

Another defender of Miller-Young, Pat Hardy, member of the Santa Barbara Friend Meeting (the Quakers) and president of Alternatives to Violence Project California, has focused on Miller-Young’s work in “conflict resolution.” Hardy, in her letter, wrote that “these workshops are offered both in the community, as well as 19 prisons throughout the California Department of Corrections and Rehabilitation,” adding the workshops focus on advertising to “gang members and at-risk youth.” Hardy urged the judge to allow Miller-Young “to make a change by exploring the world of non-violence within this setting.”

You have got to be kidding me! Miller-Young has certainly “demonstrated” her commitment to “non-violence.” There was no reason for the violent action Miller-Young committed against two individuals who were exercising their God-given free speech and assembly rights. Miller-Young didn’t like the message so she resorted to violence – violence. A woman who conducts workshops focusing on “non-violent conflict resolution” used violence in a peaceful situation where no conflict was present.

And, the wheels on the bus go round and round.

To be fair, Miller-Young wrote an apology letter to the Short sisters indicating she had no right to commit the actions she did regardless of her being personally offended, and recognized the rights of the group to be at UCSB. However, Miller-Young did not acknowledge her assault of young Thrin Short, nor did she issue an apology for the act of battery.

Miller-Young has grasped at the proverbial straw in her defense, and so have the UCSB professors who are supporting her. This woman should not be teaching young adults whatsoever. She has committed a crime and should be punished accordingly. Miller-Young should also be fired from her position at UCSB and be barred from the teaching profession.

But as with leftists these days, they are not responsible for their own actions. It has become everyone and everything else that causes their outlandish behavior and when all else fails, play the “race” card or in this case the “cultural legacy of slavery” card. Conservatives, the Constitution, Christianity and Republican policies have been blamed for assorted actions that clearly fall on the shoulder of the one responsible, including inanimate objects like firearms. Many Americans are trying to turn this country into the “land of excuses” instead of the “land of the free.”

Miller-Young made a conscious choice based in “free will” for which she must suffer the consequences dictated by a civil government charged with the responsibility to protect individual God-given rights. Her arrogance in believing her “feelings and wants” were enough to justify her commission of a crime and be absolved of any wrong-doing is appalling. Hopefully, Judge Hill has better sense than to allow a straw man defense of the “cultural legacy of slavery,” along with the other made up excuses by UCSB professors, to make a mockery of our judicial system, when the evidence suggests otherwise. If Miller-Young didn’t want to do the time, she should not have done the crime.