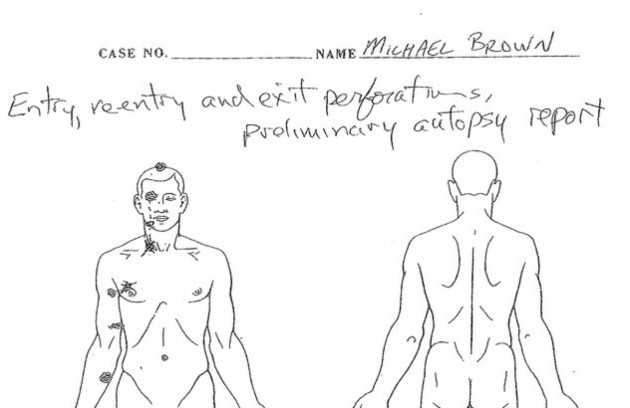 Apparently the results of the first autopsy have come back and show that Michael Brown was shot six times, but none of those wounds came from behind. Keep in mind that the Department of Justice has ordered its own independent autopsy to be performed, so these results should not be considered final or irrefutable.

I present this to draw no specific conclusions, but just to keep you informed.

The New York Times is reporting:

FERGUSON, Mo. — Michael Brown, the unarmed black teenager who was killed by a police officer, sparking protests around the nation, was shot at least six times, including twice in the head, a preliminary private autopsy performed on Sunday found.

One of the bullets entered the top of Mr. Brown’s skull, suggesting his head was bent forward when it struck him and caused a fatal injury, according to Dr. Michael M. Baden, the former chief medical examiner for the City of New York, who flew to Missouri on Sunday at the family’s request to conduct the separate autopsy. It was likely the last of bullets to hit him, he said.

Mr. Brown, 18, was also shot four times in the right arm, he said, adding that all the bullets were fired into his front.

The bullets did not appear to have been shot from very close range because no gunpowder was present on his body. However, that determination could change if it turns out that there is gunshot residue on Mr. Brown’s clothing, to which Dr. Baden did not have access.

Attorney General Eric H. Holder Jr. said Sunday that the Justice Department would conduct its own autopsy, in addition to the one performed by local officials and this private one because, a department spokesman said, of “the extraordinary circumstances involved in this case and at the request of the Brown family.”

Yesterday we reported that a user who live tweeted the Brown shooting claimed that 2 shots where fired from behind and 5 more when Brown turned around. There was also a report of a newly discovered witness that seems to indicate that Brown did not turn around to surrender, but rather to run at Officer Wilson.

Be cautious in rushing to conclusions. There is still much to be told and not all evidence or testimony should be assumed to be credible. There are always those with agendas and lies will be told. In the end it is imperative to figure out who is lying so that justice can be served.