This document, published earlier this year, promises to change the way the “authorities” deal with protesters, even peaceful ones. The consequences of ATP 39.33 could prove deadly for protesters. Further, the provisions of this Army manual could prove to be the end of the First Amendment right to peaceably assemble. In section 1-2., the manual states that  “Civil unrest may range from simple, nonviolent protests that address specific issues, to events that turn into full-scale riots“. This section of the manual clearly states that protesting is a right protected by the Constitution. However, the authorities leave themselves an out to “legally” engage in lethal force toward protesters when the manual states that “peaceful protests can turn into full-scale riots” and field commanders have the right to make that determination. Subsequently, all protests, peaceful or not, need to be managed by the potential for violence. In other words, all protests are to be considered to be violent and handled accordingly. This certainly explains the violent manhandling of the media by the DHS controlled and militarized police in Ferguson, MO.

On the surface, the Posse Comitatus Act (18 USC 1385) act should prevent the Army from deploying the troops in the midst of a protest that is not on the scale of something like the 1992 LA Riots. However, the Army claims exemption from Posse Comitatus in the four following areas.

With regard to 10 USC 331, if the local authorities have lost control in the midst of a profound display of domestic violence (e.g. LA Riots), most Americans support the use of National Guard or the military.  However, in 10 USC 332, 333 and House Joint Resolution 1292 are ripe with exceptions which opens the door to federal authorities abusing the public for exercising their Constitutional right to protest.

In 10 USC 332, the phrase “unlawful obstructions or rebellion against the authority of the United States, use of the militia or Armed Forces is authorized”  and this permits the federal government from being demonstrated against. An act of demonstration, or the most benign demonstrations of civil disobedience gives the government the authority to take “deadly action” against the public because there are no clear distinctions on when the use of lethal and nonlethal force is appropriate (see the two charts displayed below). In 10 USC 333, any disruption of federal law can be decisively dealt with by the federal government. The phrase “…conspiracy to hinder execution of State or Federal law, the use of the militia or Armed Forces is authorized” is a telling passage of this Army document. If 10 USC 333 is applied to the letter of the written Army policy, the protesters who recently objected to illegal aliens being deposited in Murietta, California, could be subject to deadly force. Further, the protesters in Ferguson could be subject to the use of lethal force as well (Again, see the charts below).

The next time a community decides that it does not want to accept illegal immigrants, or protest the shooting of an unarmed 18 year old,  they could be met by the following: The fourth exception claimed by the Army with regard to the Army’s right to violate Posse Comitatus, is presented to the American people under the veil of the need to protect politicians.

House Resolution 1292 claims any protest which makes a public official feel “threatened” would be illegal and subject to intervention by the U.S. Army. Hypothetically, if 100 protesters were to gather outside of Senator John McCain’s office in Phoenix, would that be enough to trigger a violent response by the Army? If McCain says he feels threatened, regardless if his claims are legitimate or not, it most certainly would justify the strongest response possible from the Army. Therefore, all a politician has to do is to say they feel threatened by any gathering to have the gathering dispersed and the protesters dealt with in any manner seen fit by the field commander. Make no mistake about it, this is the end of the First Amendment’s right peaceably assemble.

Do you remember the uproar when DHS was caught distributing target sheets of pregnant women to be used for DHS agents when they were engaged in target practicing? And of course, I am certain that you recall the use of an elderly person’s image to be used by DHS agents for the same purpose. The implication is clear; The American people are the new terrorists. Below, is the graphic depiction of the Army’s version of a terrorist and worse yet, there are instructions on how to best maim and kill an American citizen who is engaged in their Constitutional right to protest

The second chart is a sample guideline on when the application of lethal force is appropriate to be applied to protesters. Please note the ambiguity with regard to the application of lethal force. It is also noteworthy to point out that the following chart provides for the planned use of snipers to target the perceived leaders of a protest. These procedures remind one of the events in Kiev prior to the ouster of the Russian-friendly Prime Minister. It would appear that CIA agents were beta testing these procedures in Kiev prior to the coup. 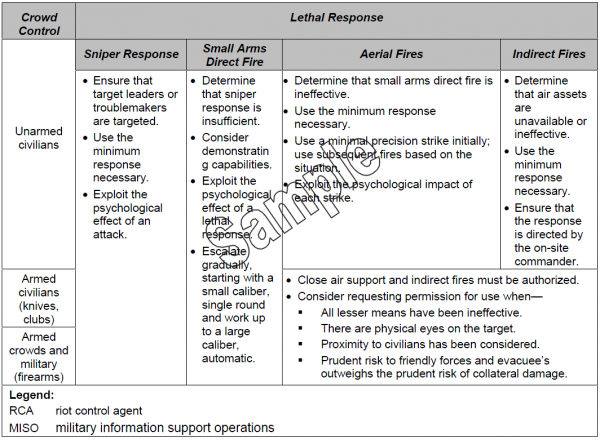 ATP 39.33 is quite clear in its intent which is to eliminate the act of protesting from the American landscape. More disturbingly, the right to summarily execute peaceful protesters is contained in this Army manual due to the purposeful ambiguity of when it is appropriate to use deadly force against protesters.This Army manual is an example of hard core, in-your-face martial law befitting the most violent regimes in the history of the planet.

There is another message contained in ATP 39.33 and that is the clear anticipation that the American people are going to feel the need to be protesting in earnest in the foreseeable future. What exactly are the American people going to feel compelled to protest that remains unspecified in this manual? Could it be resistance to mandatory Ebola vaccinations? Could we be looking at food riots in the future? Will it be a currency collapse that puts Americans in the street? Will America rise up and say no to the plans for World War III and the coming conscription of both potential military personnel and a civilian labor slave force as described under Executive Order 13603?

Not only should this document be a frightening wake-up call for all Americans, it should also serve as a warning for what is to come.