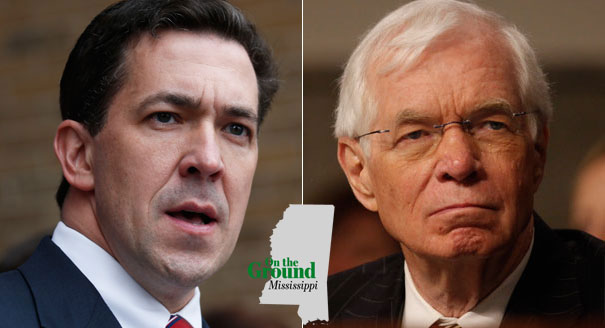 There has been a lot of talk about the TEA Party’s lack of success in 2014 but, as we have seen in Mississippi, there may be reasons for that subpar performance. In June Tad Cochran narrowly defeated Chris McDaniel (7,667 votes) in a runoff election, but McDaniel refused to concede. Almost immediately there were serious concerns raised about unethical moves made by the Cochran camp.

There were reports that Tad Cochran’s campaign actually bought votes from crossover democrats for $15 each in the primary.  His opponent and TEA Party favorite, Chris McDaniel, has tried to stick to the high ground in subsequent weeks and address other inconsistencies in the election process. As of late last week, however, Chris McDaniel has finally filed suit.

Cameron Joseph reports for The Hill:

After weeks of threats that he’d challenge the results — and an appeal to the state party to review the results that was rebuffed — McDaniel has filed a challenge in Jones County claiming that enough Democrats who’d voted in the earlier primary crossed over to invalidate the results.

“Republicans did not elect the nominee on June 24, so we are excited for the opportunity for Republicans to reclaim their primary process,” he said in a statement. “This challenge is not about the candidates. It is about the integrity of Mississippi’s election process, and we are committed to ensuring that process is accurate and fair for future Republican candidates.”

McDaniel’s campaign has submitted thousands of votes it claims were potentially cast illegally and should be thrown out. Those include McDaniels’s own lawyer, Mitch Tyner, and his wife.

Most believe he has little to no shot at overturning the primary results.

No shot at overturning the results?

Though the story did not receive the national attention it likely deserved, this appears to be one of the most blatant attempts to buy an election in recent memory. Matthew Boyle reported, on June 30, for Breitbart:

A black Mississippi pastor has emerged to claim Sen. Thad Cochran’s (R-MS) campaign paid “thousands” of Democrats $15 each to vote in the June 24 GOP runoff – and that he was part of the scheme.

Rev. Stevie Fielder, an associate pastor at First Union Missionary Baptist Church in Meridian, Mississippi, says Cochran’s campaign “told me to offer blacks $15 each and to vote for Thad.”

Fielder, who was paid by freelance journalist Charles C. Johnson for the story, provided a new outlet launched by Johnson—GotNews.com—with four text messages from a person purporting to be Cochran campaign staffer Saleem Baird.

The messages cite an official Cochran campaign email address—[email protected]—and include detailed discussions of the campaign providing envelopes of money to distribute to people who vote.

“Send me individual names and amounts along with home address to [email protected] and I’ll have money separated in envelopes at the office waiting for you,” one message, sent three days before the runoff, says.

Fielder said he helped distribute the Cochran cash for votes on a promise of eventually getting paid $16,000—and because a key Cochran campaign staffer convinced him that Cochran’s conservative challenger state Sen. Chris McDaniel was racist.

Read the rest at Breitbart.com…

The people of Mississippi deserve another election. This would be Cochran v. McDaniel III since the prior election was a runoff. And then the state must still go to the general election in November.

But can such blatant (alleged) cheating be tolerated?

This is not something that can be simply “blown off.” The winner will likely be sitting in the U.S. Senate in 2015 (providing that Mississippi voters don’t vote democrat).

For those who are cynical about the voting process, this is just another case to support their cause.

This is America. Things like this are not supposed to happen here.

Our vote is supposed to matter.