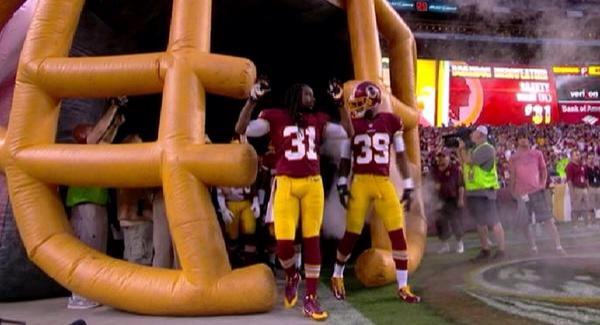 I think the Washington Redskins may have just given me one more reason to boycott the NFL this season. Though I am a believer in free speech, I also think that high-profile personalities have a responsibility to carry themselves somewhat conservatively in the public eye.

I don’t question their right to express themselves but rather their decision to act as idiots.

Why would I say that?

Because the public tends to hang on every word and action of their heroes whether it be movie stars, athletes, entertainers or even the dirty p-word… politicians.

I’ll admit that a week ago this might have warmed my heart a little. Like many I was ingesting everything I was being fed by the media. At one time I was leaning toward Michael Brown being the victim that he was portrayed to be.

Now I feel much differently. I have been doing my research, and though I can not tell you that I can conclusively prove that Officer Darren Wilson acted in self-defense, I am now definitely leaning in that direction.

At any rate, it would seem that some of the Washington Redskins players used the spotlight to make a political statement last night. I didn’t watch the game because I really am boycotting the NFL for personal reasons.

This morning I saw a story online that included this tweet.

@Redskins walk onto field with hands up. I love when a group of people realize their influence #MikeBrown #DontShoot pic.twitter.com/h75NkcdU5T

“I love it when a group of people realize their influence.”

What if that group is influencing people to riot and loot and hurt other innocent people in the process?

What if that group is, at least potentially, standing on the wrong side of the issue?

That is quite possible if not probable.

At 10:30 PM last night a Crime Reporter for the St. Louis Post-Dispatch tweeted new information that there are at least 12 witnesses who will support the story of Darren Wilson acting in self-defense.

Maybe an NFL player has no fear of a 6-4, 300 lb. behemoth charging at him. But if that is how things really happened then I would probably empty my gun as well.

High profile figures have a responsibility to the public. Period.

All of the facts are not in and none of us can really be certain what happened. That is why we have courts and a justice system. It may not always work as well as we would like but that is what it is there for.

However, the Washington Redskins just helped to convict Darren Wilson in a court of public opinion and that is a problem, especially if he ends up being innocent.

Yet, as illogical as it is, there are now many more people in support of Michael Brown because they saw it on Monday Night Football. The players that wear their beloved team colors touched their hearts last night as they raised their hands in support of a probable thug who may have charged a cop and caused his own death.

You certainly haven’t heard that narrative in many places so far but I am beginning to see that there is a very good possibility that Officer Darren Wilson acted in self-defense. If there truly are over a dozen witnesses then it would speak volumes.

What is that you say? You haven’t seen any of these witnesses in the news?

Of course you haven’t. A cop shooting a bad guy in self-defense doesn’t sell newspapers. The media outlets are purposely seeking interviews of the witnesses that will bring them the highest ratings. The truth is often secondary.

Use your heads NFL Players. You are men. You are respected in your communities.

This little shenanigan did more to hurt the situation in Ferguson than it did to help.

And by the way, I live in Missouri and, though I do not live extremely close to Ferguson, this situation will effect me more than it ever will most of these players.

Missouri residents are anxiously awaiting the political spins, fallout and necessary legislation that will spring from all of this. We are now swallowing the bitter pill that part of our state is effectively under martial law.

Then again, maybe I am jumping to conclusions as well. The Twitter user certainly had her opinion as she witnessed the event.

But considering the Redskins went 3-13 last season, maybe it was simply a sign that they are giving up as well.